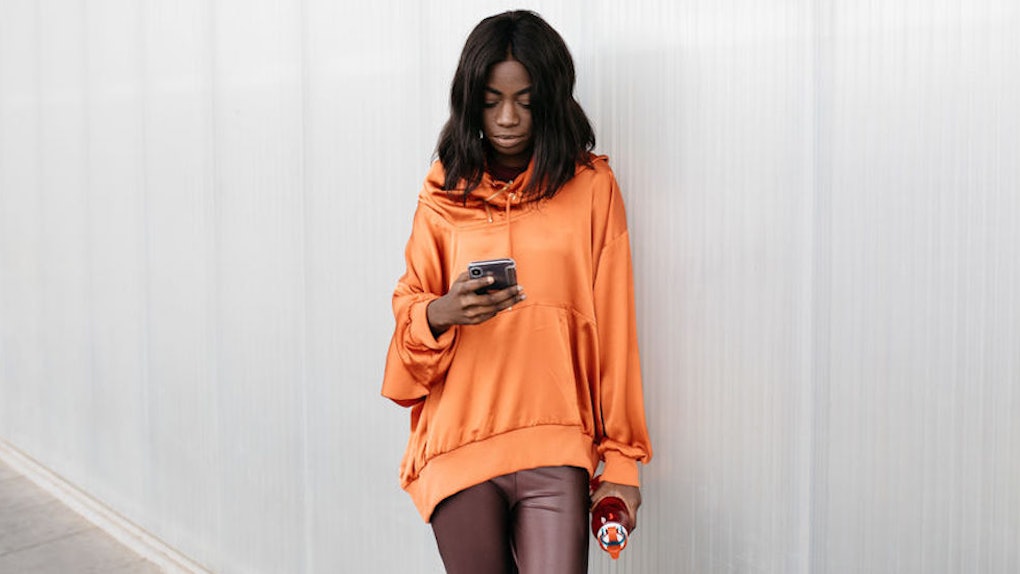 8 Brutally Honest Phases Of Getting Ghosted That Are So Accurate, It Hurts

Dating someone new only to have them drop off the face of the planet is nothing new. Being ghosted is the kind of pain that I would only wish on my worst enemy. (Sorry, not sorry.) Why, you ask? Well, even though most people objectively realize that being ghosted isn't their fault, it somehow still has the power to mess with your head in a pretty agonizing way. The phases of getting ghosted probably won't come as a surprise because we've all likely been there. You meet someone you're excited about and it seems like everything you've ever wanted out of a relationship is right on the horizon, and then... crickets.

And the worst part is that the possibility of getting closure is usually slim. I mean honestly, if they didn't have the decency to respond to your casual "are we still on for Friday?" text, then the chances of them having an honest dialogue about why they seemingly, out of nowhere, realized they never want to see you again is probably out of the question.

This is actually kind of great (even if you don't realize it right now), because you dodged a bullet. If someone isn't mature enough to be upfront about their feelings, then it's perplexing why they would think they're mature enough to even date. But as it turns out, the world is full of hot, smart, witty toddlers disguised as adults! (Kidding! Kind of.) In case it's been a while since you've felt the burn, here's a reminder of what it's like to get ghosted.

Maybe it's just me, but pretty much every time someone takes an uncharacteristically long time to respond, I wonder if an imminent ghosting is coming my way. Honestly, I think so many of us are traumatized from being ghosted that we worry it's going to happen again way more than it actually does.

2. The False Sense Of Security

After the initial early-onset panic, we come back down to earth and reassure ourselves that no one in their right mind would actually do that to us. They're probably just busy, or their phone died, or they're dealing with something. It's only been a few hours after all.

Usually around 24 hours after a text has gone unanswered is when the real panic starts to set in. Like, it's been a full day. They have gone to bed and woken up — both events that usually require some phone usage. And the message says Delivered, so...

But why would they do that? Why would that awesome, fun, trustworthy-seeming person just not respond to me? Don't they realize that's such a bad way to let someone know you don't want to see them any more? This is usually the point where many people consider the unthinkable: sending a double text. Maybe something actually bad did happen or they had a family emergency? Maybe, but probably not.

This is the point where you start picking apart and twisting their great qualities as proof that they really are just a huge jerk. And we annoy our friends by ranting to them about how they totally led us on, and about how if we do finally hear from them we're not going to respond and ghost them right back.

5. The Continual Agony Of Hoping You Hear From Them

Once several days have passed and you still haven't heard from them, those who resisted the temptation to send a double text are probably still feeling confused, and those who decided to follow up with yet another unanswered message are likely feeling even worse. Still, even though you're mad, there's still a universe in which you'd like to hear from them, even if it's only to suss out why they trolled you.

Fast forward several more days (or even weeks) later, and low and behold, look who decided to show up. One part satisfaction and two parts annoyance at the fact that this troll has made the achingly transparent jerk move and hit you up last minute on a primetime night to "grab a drink" — which is obviously code for "my actual date flaked and now I'm desperate, wanna bang?"

Well, now that you've realized they're not worth your stress and anxiety, you can finally rest easy. No car accident, no sudden family emergencies, no dropping their phone into one of those perfectly phone-sized holes in the drainage grates. At the very least, every mature adult deserves to date another mature adult who doesn't take the easy way out. Being communicative is such an important skill when it comes to building a relationship, and if someone can't do that, the truth is you can find another great person who can.