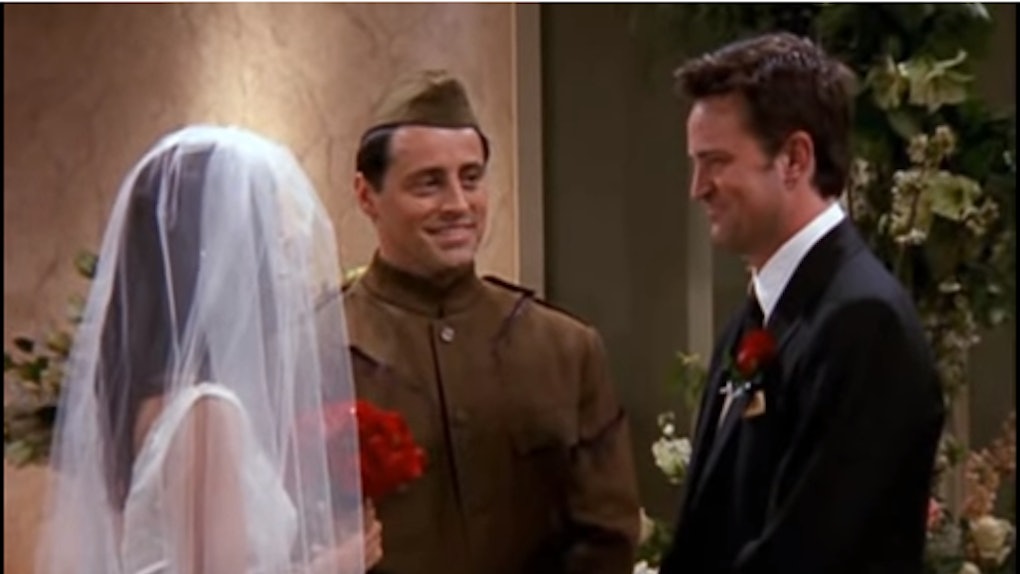 8 Best TV Weddings We Wish We Could Have Crashed

Our favorite TV shows have set the standards to what we expect in real life. Both a blessing and a curse, that includes those sob-worthy wedding ceremonies between our favorite characters. Everything always seemed to come full circle in those moments of matrimony in the best TV weddings that we wish we could have seen IRL.

We've seen these snippets so many times (more than we'd like to admit), and we still come to the same conclusion: We should have freaking been there. Crashing any of these iconic TV weddings would have been so amazing and unreal. You follow these characters religiously on the show that you become pretty attached to them and their relationships. Seeing them get married on your screen is like watching an old friend tie the knot. We eat that sh*t up. Can you blame us?

We're happy, sobbing, and ecstatic all at once when our faves get married. Just like our tastes in shows are different, the people getting married in them are as well. All weddings are unique in their own way, and it's nice to know that we have access to a plethora of them with handy dandy Netflix or Youtube. So, if you remember that time when you couldn't sit still on your couch and your happy tears salted your bowl of popcorn, you were likely watching one of these TV weddings unfold and were experiencing some major FOMO.

1. April And Andy In 'Parks And Recreation'

Talk about the most impromptu, laid-back wedding ever. April and Andy's romance was so adorable to see blossom over such a short time. The fact that they were getting married so quickly scared the living crap out of us, but it highlighted an important factor about life. Sometimes, you've just got to do it.

2. Dwight And Angela In 'The Office'

So, despite the fact that Angela had little to no feeling in her legs after spending hours in the trunk of a car, this union was one fans were rooting for. The Office in general will always hold a special place in our hearts. This wedding was one of the few we got to see and it was so, so perfect.

Cory and Topanga gave us hope that the little crush you had on the boy or girl next door, could last for a lifetime. Boy Meets World was every young adult's guide to dealing with the changes that come with age. "Sweethearts" doesn't even begin to describe the feels these two have. I'm not crying, you're crying.

Yes, The Office gets a second slot. Pam and Jim's relationship journey was all of our journey at some point. From the not knowing to knowing, but then something goes astray, we needed these two to get married for our sanity. They were basically made for each other.

5. Dwayne And Whitley In 'A Different World'

OK, the main reason you would want to crash this party is for the dramatics that happen midway through the ceremony. You think you're watching Whitley get married to Byron and then boom, a turn of events for the best. Dwayne totally takes that whole, "If any of you has reasons why these two should not be married," thing literally.

6. Martin And Gina In 'Martin'

To be honest, this wedding scene would not be the only time you were in tears watching Martin. He is an incredibly talented comedian who brought out the funniest traits of the entire cast.

We all wanted this wedding to happen, so when this duo flew away from the BS and made it happen, we swooned. And SZA said it first, but, "Go, Gina. And go, Gina." She was such a beautiful bride and that super angelic voice of Babyface? I'm done.

7. Monica And Chandler In 'Friends'

Can you even have a wedding countdown and not mention Friends? Monica and Chandler's wedding was one of the many pivotal moments we followed with this group of friends. They all seriously became part of our inner circle, they just didn't know it.

As much as it was hard to take Jamie Foxx seriously in this show because he was so freaking goofy, he dropped a ton of emotions when he married Fancy. After years and years of back and forth, this awesome couple finally made it official. This cast was seriously everything. Also, peep Uncle Phil AKA James Avery from Fresh Prince of Bel Air, marrying them. I see you, fam.

Of course, we know life doesn't happen the way it does on TV, but these weddings really pulled at our heartstrings. Every wedding is something worth watching.