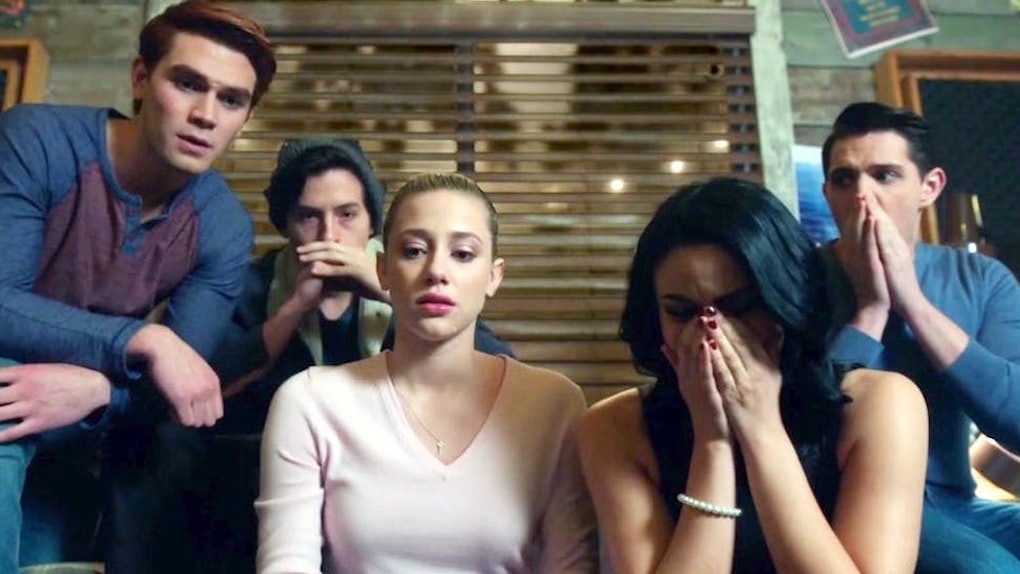 Riverdale is an endless spout of mystery, drama, and teen angst, but unfortunately, there are only so many episodes that you can binge before running out. With all of the crazy cliffhangers and shocking twists that go down on the show, having to wait for a new Riverdale episode can feel like an eternity. Thankfully, there are a ton of other dark teen dramas that can whet the appetite of any diehard Riverdale fan! Here's a handy list of TV shows to binge if you love Riverdale and need more twisty, teen drama in your life.

Recommended if you love Riverdale for: Whodunnit murder mysteries.

Easily the closest analogue to the dark, teen murder mystery of Riverdale is Pretty Little Liars. The ABC Family (now Freeform) series ran for seven seasons from 2010 to 2017, and now a spinoff called The Perfectionists is on its way as well, so you will have more than enough episode to binge. The show focuses on a group of friends who are continually threatened by an anonymous blackmailer, and they go throw just as many wild adventures as Archie, Jughead, Betty, and Veronica to try to find out who is putting them through hell.

Recommended if you love Riverdale for: Hot teens with relationship drama.

If you are more into arguing about #Barchie versus #Bughead than trying to figure out who that darn Black Hood is, then chances are you would be a lot more interested in a show that involves more steamy romantic drama than heaping on more murder mysteries. In that case, look no further than Gossip Girl. Although it's much lighter on the murder than Riverdale and Pretty Little Liars, in many ways, it is the blueprint for both series. The show revolves around the social lives of a handful of wealthy, elite New York high schoolers (later college students), which are complicated by an anonymous blogger who reports all of their secrets online.

Recommended if you love Riverdale for: The central friendship of the main cast, and the action-adventure elements.

Long before Riverdale was bringing dark, life-threatening mysteries into high school life, there was Buffy the Vampire Slayer. Although Archie and the gang don't have to fight vampires or demons (yet, at least), Riverdale fans will still find a lot of what they love about the show in Buffy as well. Buffy's Scooby Gang faces solves dark mysteries and faces down baddies just like Riverdale's core four, all while juggling the struggles that come with their formative teenage years.

Recommended if you love Riverdale for: The small town with a big, twisted secret.

The cast and creative team behind Riverdale have been very vocal about what inspired the show. Yes, obviously the Archie comics are a huge part of the series, but surprisingly enough, the teen drama is just as inspired by the early '90s cult classic series Twin Peaks. Riverdale alludes to Twin Peaks very often — most notably in the casting of Twin Peaks star Mädchen Amick as Alice Cooper —and attempts to translate the quirky murder mystery plotlines into a modern, teenage setting. If you want to pick up on a lot of cool little Easter eggs and references hidden in Riverdale, then you are definitely going to want to binge your way through Twin Peaks.

Before Betty Cooper and Jughead Jones were sleuthing out the truth in Riverdale, Veronica Mars was proving that high schoolers can be professional detectives, too. Much like how Betty and Jughead's investigative efforts usually lead them to trouble, so do Veronica Mars', and the mysteries are sure to keep you guessing up until the last moment when Veronica finally reveals how it all fits together.

Premiering around the same time as Riverdale, 13 Reasons Why quickly made a name for itself as another hit teen series, and it is a pretty good bet that if you like one, you will also probably be into the other. Although there are no masked murderers or threatening mafias running around in 13 Reasons Why, the show still revolves around a central mystery: Why did Hannah Baker kill herself? Also like Riverdale, it stars an ensemble cast of relatable teen characters, all of whom could also be hiding a huge secret.

Recommended if you love Riverdale for: Its occasional dark humor.

Riverdale is known to tread the line with the supernatural, but it still has yet to take the plunge. For fans that are ready for a more paranormal experience with the same teen drama core, Misfits may be the perfect fit. The British dramedy is about a group of teenage delinquents who suddenly develop superpowers and are forced together to hide the truth and get some answers.