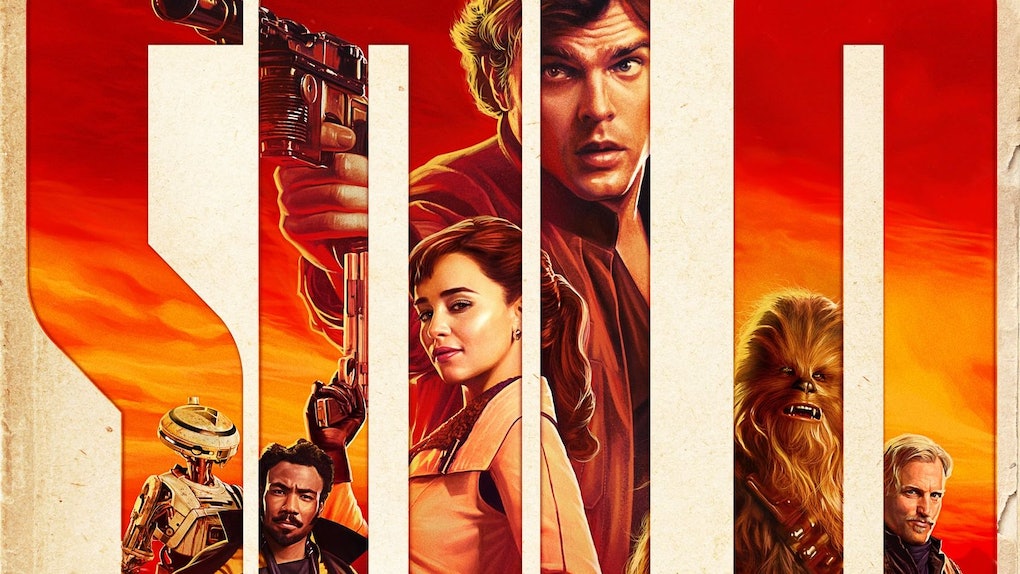 Solo: A Star Wars Story released its second full-length trailer and gave fans a deeper look into the adventures of Han Solo prior to meeting Luke and Leia. We also got a better look at the heist that turned Han Solo into a smuggler and a look at the game of Sabacc where the Falcon was put up as part of the bet. The details in the new Solo: A Star Wars Story trailer serve as a reminder that there's actually a lot we don't know about the characters we first met in Star Wars: A New Hope.

But my personal favorite details is one that most fans seemed to think was merely in there for laughs. Chewie, it is revealed, is 190 years old. Han does a double and then a triple take. Here he is, 20-something at best, and his about-to-be co-pilot is how old?

But we knew Chewie had to be around that age, as according to Smuggler’s Run - A Han Solo & Chewbacca Adventure, which is a Star Wars: The Force Awakens prequel novel, he was 180 years old at the battle of Kashyyyk in Star Wars: Revenge of the Sith. That battle was 19 years prior to A New Hope. The events of this movie, therefore, take place a decade after Sith and about nine years before Rogue One's prequel to New Hope.

Let's see what other fun details there are.

This is the second look at Han's homeworld, Corellia. But unlike the first, which was him and Qi'ra joyriding with an Imperial on their tail, we get a good look at how much the Empire is a presence for Han growing up. The now-no-longer-canon novels had suggested Corellia was more of a seedy backwater, but here it looks like they're probably one of the main sources of steady employment.

This character was revealed by Funko Pops released this weekend as "Enfrys Nest" and spoilers out of a French publication have all her nouns gendered female. If that second fact is true, that makes her one of the very few female villains in the Star Wars universe.

Why are we so sure she's a villain? The people arrayed around her are the swoop-bike gang known as the Cloud-Riders, which are the bad guys straight out of the Star Wars 1977 comic that originally detailed Han's life prior to meeting Luke and Leia.

The trailer also contains the moment where Han gets that good blaster by his side. You know the one, the BlasTech DL-44. There's no match for having one by your side when it comes to hokey religions and ancient weapons.

That blaster is also important earlier in the trailer. Han doesn't have it when he's facing the Cloud-Riders. Cut to walking into the bar to face down Lando, and that's definitely Han's favorite weapon on his hip.

4. Everything We Heard About Lando Is True

Everything you've heard about Lando is true. Including shots of the fateful game where Han and Chewie will win the Falcon. One slightly confusing thing is that it seems like this might be the same game where Qi'ra introduces Han to "the best smuggler around," but I'm betting those are two different scenes cross cut.

There are five planets in this trailer: Corellia, the snow planet where the heist happens, the desert planet where Beckett proposes the scheme, the foggy planet which might be Kessel, and the muddy planet. That muddy one, according to the merchandise, is Mimban.

That's a big deal because (according to now-defunct Extended Universe novels) Mimban is the planet where Han liberated Chewie from Imperial slavery, and the two became fast friends.

Our first look at Paul Bettany who plays the big-time gangster that Beckett and his small-time smugglers are working for. This is interesting because Bettany was a recast. The original actor, Michael K. Williams, was one of the few dropouts between directors because he couldn't do the reshoot schedule.

But according to him, the original concept for Vos was a motion capture character, a “half-mountain lion, half-human.” Obviously, Ron Howard discarded that on the recasting. What else was discarded along the way?

The biggest reveal though is that Chewie's got a girl! This is huge because back in the very early days, Chewie had an entire Wookie family. We met them in the ill-fated Star Wars Christmas Special. His wife's name was Malla. (Their kid was named Lumpy.) All that was stricken from the record years ago. But could this be Star Wars resurrecting a version of her?

Note also they're on the foggy planet which fans are pretty sure is Kessel. Kessel in the Extended Universe was a home for Wookie slaves. Was Han's Kessel Run part of the Space Underground Railroad setting slaves free, including Chewie's girlfriend?