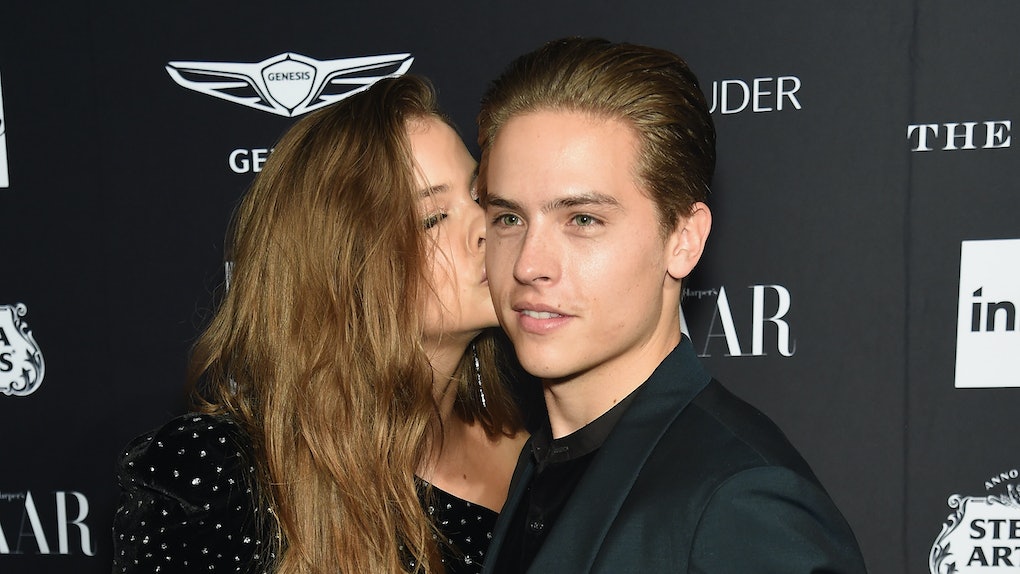 I've never personally attended a red carpet event, but I'd like to imagine it's a lot like pre-prom pictures. You usually get a little tipsy (no? just me?), grab a date and then you pose while your adoring fans (or in my case, parents) take pictures before you head to the main event. The whole thing looks like a blast. These photos of Dylan Sprouse and Barbara Palvin at Harper Bazaar's ICONS party prove my theory by just going to show how fun the red carpet can really be when you decide to take it on with the right partner in crime.

Sprouse has been rumored to be dating the Hungarian model for a while now. Back in July, Cosmopolitan reported that they went to the World Cup together and, as if that wasn't steamy enough, they also flew back to New York together. Since then, the couple has made a few more public appearances and, despite their flirty social media banter, the jury was still out on whether or not they were officially an item. I'm going to go ahead and say these steamy pictures of them on the red carpet this weekend are going to help any doubters of their relationship make a more concrete decision because, well, they're all over each other.

Don't believe me? See for yourself.

He's in awe of her booty.

He literally cannot handle her booty to the point where he seems to be kissing his hands in a prayer position — possibly in an attempt to thank the Lord for blessing him with it?!

He's also in awe of her face, in case you were concerned about that. Seriously, look at how he looks at her.

I think all any of us really want in life is someone to look at us with that sort of love in their eyes.

The sexual tension between them is palpable, even when they aren't doing flirty poses.

Look at how far towards him her leg is!

Just look at them flirtatiously goofing around. Does that look like the kind of goofing around you do with a platonic friend? Yeah, I didn't think so.

Here they are just adorably LOLing together.

Probably some adorable inside joke that we wouldn't get.

They managed to get it together for a split second.

...then obviously she had to give him a smooch.

So... yeah, I think it's safe to say that things are pretty hot and heavy between these two.

Before being linked to Palvin, Sprouse was in a relationship with model Dayna Frazer for almost three years. The two finally broke things off in August 2017 when Frazer reportedly accused Sprouse of cheating on her. (Elite Daily previously reached out to Sprouse and Frazer's teams for comment, but did not hear back by time of publication.)

He responded with this statement:

I will say this and only this: by adhering to an assumption based on limited information, you neglect the complicated nature of this issue. The truth always has two sides, and those sides have motivations, and those motivations, despite how cloudy they currently seem, are private. This is complicated and it will remain complicated, but those who know me and who have known me, know well enough what kind of person I am. And that is all.

Luckily, based on these pictures, I think it's safe for us all to assume that the past is in the past.