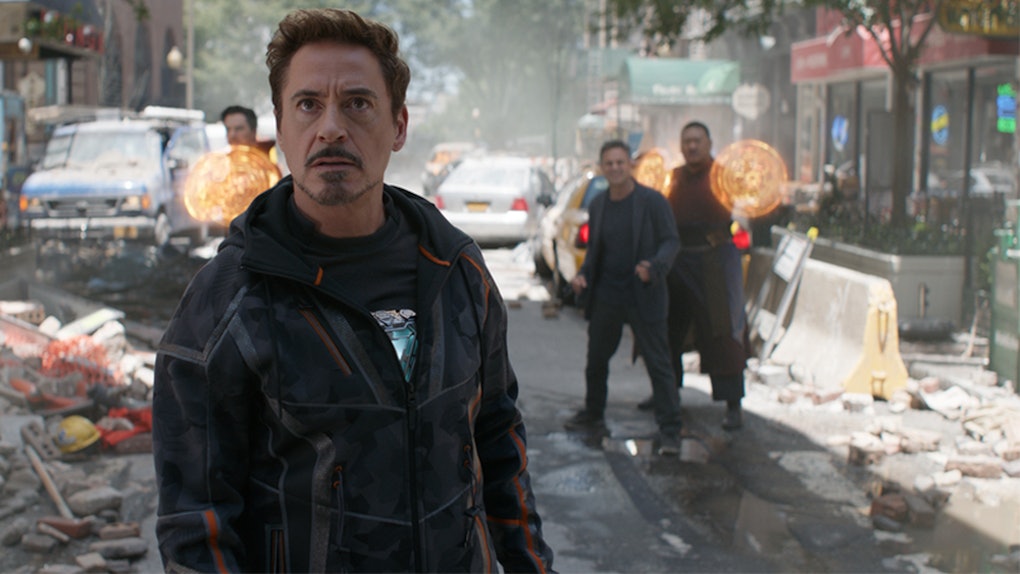 7 'Avengers: Infinity War' Theories That Will Make You Want To Buy Your Tickets ASAP

For the Marvel Cinematic Universe's 20th film Avengers: Infinity War, the secrecy has been unprecedented. Unlike the other major arm of the Disney Universal franchise, Star Wars, Marvel hasn't been all that big on spoilerphobia, especially since most of their film plot points are pulled from Marvel comics that have been out for years. But Infinity War marks a new phase of secrecy for the MCU, even as it brings Phase III to its end. The lack of details has given rise to a ton of Avengers: Infinity War theories ahead of the film's release on April 27, 2018.

There won't be any answers until April 27, either — a date which was moved up in the U.S. to match the release date in the UK for the first time in Marvel history. Unlike their other films, Marvel is not screening Infinity War in press previews, lest the audience seat-fillers (who make it their business to attend such screenings) let secrets slip. The cast is also in the dark, with many insisting they only got partial scripts with just their parts. Those who do know the major spoilers, like the Russo Brothers, who directed the film, and Robert Downey Jr, who plays Iron Man, have put out public pleas to keep spoilers under wraps.

So, what sort of plot points could the studio be so desperate to keep quiet? Here are some of the most plausible theories.

1. Steve Rogers Will Die And Bucky Will Take Up The Shield

This is the biggest theory and would account for the Marvel lockdown on plot details, as well as the pleas to keep spoilers under wraps. Everyone knows Chris Evans is done with making these movies, and Captain America is the fan favorite of the original characters. Killing him off and passing his shield to the now-rehabbed Bucky only makes sense.

2. Hulk Is In The Hulkbuster

Since the shot of the Hulkbuster armor with Tony Stark in the regular Iron Man armor next to it, fans have been trying to figure out what they are seeing. As Hulk begins to lose the ability to transform back, his green body becomes the only one he has. Would Tony rejigger his XL suit to protect his BFF Banner?

3. The Soul Stone Is What Powers Wakanda

There was literally only one disappointment for Marvel fans in February's Black Panther: no sign of the Soul Stone, the only Infinity Stone still unaccounted for after 19 films. That's led to theories that the Soul Stone basically *is* Wakanda. The "meteor" that made Vibranium is the Soul Stone and that's why so much of Infinity War set within its borders.

This is more of a given than a theory. The only question is when Thor will forge himself a new hammer after the events of Ragnarok, not if. Considering that there's a massive Big Bad heading for Earth and Thor is going to need to be on his A-game when he rejoins the team, forging himself a brand new hammer during Infinity War just makes sense.

5. Loki Will Betray Thanos And Be Killed

Much like Chris Evans, Tom Hiddleston is basically done with this series. The character has been fun, but he's also basically played out. (And if Thor is going to have another sequel, having him grieving for his brother is a great way to start out.) Killing off Loki is a great way for the film to up the stakes without killing off one of the real "main" characters.

6. Tony Stark Will Travel Back In Time

This is a theory based on filming spoilers that leaked out of Avengers 4, where fans spotted the original Avenger characters (like Captain America) suddenly sporting their original haircuts and costumes from the original 2012 The Avengers. If there are a whole lot of deaths, or worse, Earth falls in Infinity War, Stark going back in time to "fix" it would explain why this was a story that would never fit into one film's runtime.

Like Chris Evans, Robert Downey Jr. is coming to the end of his run in this role. He's not as tired of it but he's out of contract, and he's expensive. Having him killed off or retired only makes sense. But who would take over the Iron Man suit and the role that the MCU house was built on? Fans are hoping the answer is Letitia Wright, whose breakout performance as Shuri in Black Panther made her a perfect candidate to be the new technology guru of the Avengers team.