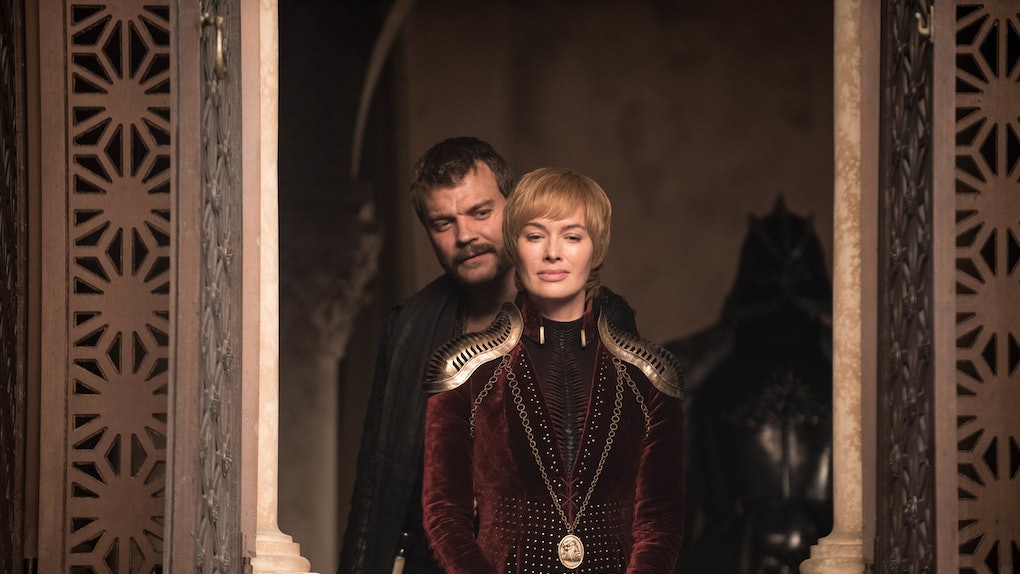 Did you think the fight between the Night King and the living was a battle for the ages? Game of Thrones was just kidding with that. There is now another battle looming, and this one will be conducted in broad daylight so everyone can see what is happening. The Battle of King's Landing is going to take out most of the characters who lived to see it, with many fans putting money down that Cersei won't come out of it alive. These theories about Cersei's death on Game Of Thrones prove there are a lot of suspects to take down the Mad Queen, at least the one on the Lannister side of the board.

The good news is that there are a few candidates who can be removed from the equation. Euron, for instance, almost certainly won't go nuts and kill Cersei. The Mountain probably won't kill her, and neither will Qyburn. All have proven themselves fully loyal. Also, Varys can most likely be struck from the list, he's too busy plotting to have Jon Snow, ahem, Aegon Targaryen, take the throne when all is said and done.

Also, Sansa will almost certainly not be the one to take Cersei down despite what some hoped. But Sansa is a player, not a killer. The latter is Arya's department.

Speaking of which, here are the most likely candidates.

1. Cersei Will Be Killed By Daenerys

This is the current "Most Likely To Kill Cersei" candidate after this week's episode. Up until now, Daenerys was never favored to take down Cersei, with most assuming she'd be too busy conquering King's Landing to worry about taking out her rival personally. But the death of Rhaegal followed by Missandei just changed that calculation. How does Cersei feel about Dragon fire?

2. Cersei Will be Killed By Tyrion

Tyrion being the one to take down his hateful sister has been a fan favorite answer for a long time. It also fits with the mystic elements left in the show. Tyrion is Cersei's little brother, the prophecy of the Valonqar says she'll be done in by her little brother. Moreover, Tyrion has proven himself loyal to the bone to Daenerys, despite the rise of another candidate.

3. Cersei Will Be Killed By Arya

When Arya and the Hound took off from Winterfell heading to deal with "Unfinished Business" with no plans to live through it, everyone knew what those goals were. The Hound is heading to CleganeBowl, while Arya is aiming to cross one more name off her list. Could she be the one to sneak in and take down Cersei? Whose face will she wear when she does?

4. Cersei Will Be Killed By Jaime

The other half of the main suspects for the Valonqar prophecy, since Jaime is technically Cersei's little brother as well. Not as popular as Tyrion, but also not as straightforward. Game of Thrones does like a twist...

5. Cersei Will Be Killed By Jon

Like Daenerys, Jon Snow wasn't a heavy favorite to take out the leading Lannister. But she just killed his dragon, and if Daenerys is busy razing King's Landing to the ground, Jon could be the one to go in and take the queen out on her behalf. (He needs to prove loyalty after all, especially now that Sansa opened a group chat to tell everybody his real name.)

6. Cersei Will Be Killed By Brienne

Still the most far fetched of the suspects, and the least popular for fans, but considering how Benioff and Weiss write women sometimes, it cannot be dismissed out of hand.

More like this
This 2021 'Game Of Thrones' Season 8 Trailer Is So Confusing... & So Good
By Ani Bundel
These 'The Nevers' Theories About That Flying Ship Are Absolutely Bonkers
By Ani Bundel
What Happened To The Rose Family After 'Schitt’s Creek'? 6 Theories
By Rachel Varina
Stay up to date