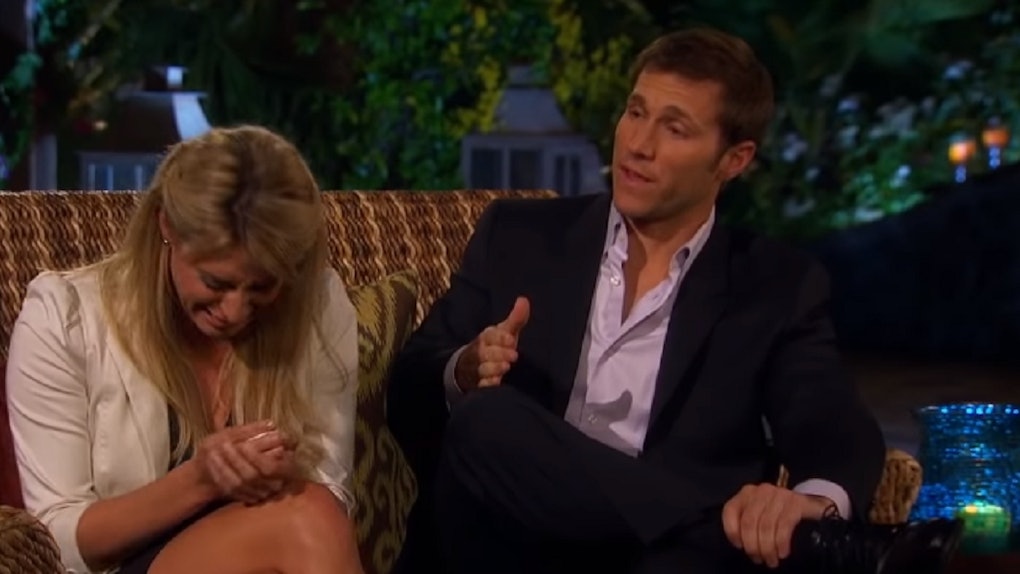 On the current season of The Bachelor, aspiring speech pathologist Cassie broke Colton Underwood's heart when she chose to send herself home rather than embrace the fear of a proposal from the former NFL star. The duo's circular conversation about their feelings and why Cassie couldn't even commit to the idea of dating captivated audiences, but this isn't the first time Bachelor Nation has totally blown away fans. In case you've forgotten, these shocking Bachelor endings left viewers with their mouths hanging open.

This season's "Women Tell All" special included a nostalgic montage about the most memorable Bachelor breakups. Although the feature delved deeper into franchise history than longtime fans probably anticipated, any newer viewers were out of luck when it came to understanding the context of the older situations. It's hard to imagine witinessing some of these vintage moments without a platform like Twitter to dissect them on, but such was the way of Bachelor fans back in ye olde days before social media.

The "Women Tell All" package touched upon some of the moments below, but it either breezed by or left out some of Bachelor Nation's biggest shocks. If you're curious about some of these breakups that Cassie and Colton join in the Bachelor Hall of Fame, we've got you covered. Read on for the lowdown of this franchise's most memorable endings.

1. Arie Ends An Engagement With Becca On Camera ('The Bachelor' - Season 22)

Colton's fence jump is definitely a big deal, but it's still tough to beat the painfully awkward split between Season 22 Bachelor Arie Luyendyk Jr. and his Final Rose pick Becca Kufrin. Arie was already an unpopular Bachelor because of the large gap between his Bachelorette season and him stepping back into the limelight as a lead. His dry, often stilted personality became especially clear when he proposed to Becca even though he seemed more comfortable with getting engaged to runner-up Lauren Burnham.

Bachelor Nation still isn't over what happened next. Weeks after filming wrapped, Arie confessed to Becca on camera in an unedited scene that he wanted to pursue Lauren. Poor Becca was left crying while Arie repeatedly ignored her pleas for him to leave. Watching it was simultaneously uncomfortable and fascinating, but it helps that both Arie and Becca are in new, happy relationships right now. Still, it's surprising that this scenario didn't send Arie over a fence.

Despite them being one of the franchise's success stories, you don't hear much about Bachelorette Desiree Hartsock and her husband Chris Siegfried. We partially have the confusing end of her season to credit for this. During fantasy suite week (apparently a breeding ground for relationship trauma), contestant Brooks Forester, seemingly Desiree's frontrunner, confessed that he wasn't in love with her and felt obligated to leave if he wasn't ready for engagement. Sound familiar?

Like Colton, Desiree tearfully admitted to Brooks that she loved him and was going to tell him that during their date. That didn't stop him from leaving the competition. Still visibly heartbroken, Desiree shocked fans when she continued with the season and accepted a proposal from Chris. Several years and two kids later, their relationship is definitely legit, but at the time of the season, Bachelor Nation was baffled about this edit implying that Desiree settled for someone else.

Along with Arie and Becca's breakup, this moment didn't make it into Bachelor Nation's most recent revisiting. Maybe it's still too soon for viewers, because Rachel Lindsay saying goodbye to fan favorite Peter Kraus was pretty heartbreaking. Rachel is still happily engaged to Final Rose pick Bryan Abasolo and has addressed how much of their relationship didn't air, which explained fans' intense attachment to the dreamy Peter.

Something about Peter's graying hair and Midwestern accent captured Rachel's attention early on in the season, but his reluctance about getting engaged so quickly transformed into one of the season's biggest storylines. During their final one-on-one date, Peter admitted that while he thought they had a future, he couldn't commit to such a speedy engagement for the sake of a TV show. Like with Desiree, Rachel's emotional farewell stuck with viewers (she cried her fake eyelashes off, guys!), who had questions about the validity of her engagement to Bryan. Again, things are fine now, but fans felt particularly duped by this breakup and what followed it.

4. Jake & Vienna Appear In A Tense Interview After Their Breakup ('The Bachelor' - Season 14)

After they got engaged on The Bachelor, cheating rumors soon swirled around Jake Pavelka and Vienna Girardi. Their relationship ended only months after their engagement aired on TV, but during the following season of The Bachelorette, they appeared in a pre-recorded interview together. As Chris Harrison mediated, the pair's jabs at each other culminated with Jake yelling at Vienna, who tearfully stormed away from cameras in search of a fence to leap over (OK, not really).

The interview didn't exactly rectify anything between Vienna and Jake, who later reunited as fierce rivals on the now-defunct Bachelor Pad. Still, it's safe to say that we've never seen a Bachelor breakup as hostile as this one.

If you want further insight into how this breakup affected Bachelorette Ali Fedotowsky in the long run, look up pictures of her husband Kevin Manno. He shares pretty similar facial expressions with former Bachelorette contestant Frank, who was basically Ali's frontrunner before he visited his ex in between hometown dates and fantasy suites. Suddenly back in love with his old girlfriend, Frank broke the news that he had to leave the competition, totally blindsiding Ali.

Anyone who kept up with this season probably noticed the signs that Ali was nearly head over heels for Frank, but her season finale didn't cause as much controversy as other Bachelorettes' did. She became engaged to Roberto Martinez, but the couple called it quits about a year and a half after the proposal. Meanwhile, Frank is getting married later this year.

6. Jason Breaks Up With Melissa To Be With Molly ('The Bachelor' - Season 13)

Before there was Arie, there was Jason Mesnick. The single dad broke down after saying goodbye to Molly Malaney at the proposal stage, but he still proposed to remaining contestant Melissa Rycroft. Instead of going live for the "After the Final Rose" special, ABC aired a taped segment filmed several weeks after Jason and Melissa's engagement. There, Jason admitted that he and Melissa were going to break up and that he was still in love with Molly. Unlike Arie and Becca's scenario, Melissa probably had an inkling about what was happening, and ABC also spared the trio from audiences' boos and jeers throughout the conversations. With current context, the moment is nothing compared to what Arie did, but it was big news back in the day.

No matter how his season ends, Colton's outcome definitely has a place alongside these epic Bachelor finales. Season 23 of The Bachelor continues on Monday, March 11, and Tuesday, March 12, at 8 p.m. ET on ABC.