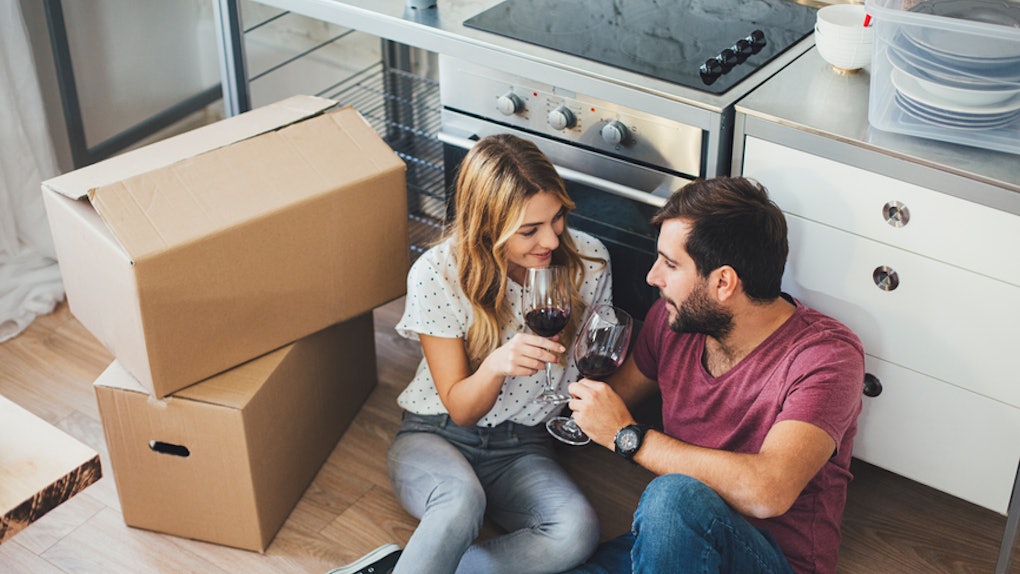 I have a lot of thoughts about moving in with your partner; most notably, you shouldn't do it if you're not ready to move in together. If this hasn't occurred to you, it's OK. It's actually not your fault. I've realized that most of the TV couples I grew up with decided to move in together out of convenience rather than an actual desire to wake up face to face every day. Rory Gilmore and Logan Huntzberger in Gilmore Girls? Moved into Logan's penthouse after Rory's roommate Paris kicked her out. I mean, wow! Talk about romantic.

I was never convinced that Chandler Bing really wanted to move in with Monica Geller in Friends, either. His sales pitch was basically that he could just unpack his bags from their last trip together at her place since he was already there. I'm sorry, could he be any lazier?

Perhaps, the worst reason you can move in with your partner is out of convenience because the implication is that you're roommates and nothing more. Like, "Hey, you know what would be great? If I moved into your studio apartment for a while. Right? It's close to my internship and we could switch to one Netflix account instead of two!"

No. Just, no. If you're rationalizing a new living arrangement with your partner like this, you're not ready to move in together. Here are six more signs you and your partner aren't ready to take this next step.

You Or Your Partner Has Poor Money Management Skills

Presumably, living together means you'll be sharing at least some of the expenses. On one hand, this is a plus because it means the financial burden isn't totally on you. On the other hand, you risk running into serious problems if your partner isn't holding up their end of the bargain. Not only will you be in debt, but you'll also feel used by your partner, which is sure to cause more problems between you two.

You're Not Ready To Share A Bathroom With Someone Else

This is a big deal for some people, especially if you're super tidy and you find out your partner skipped the kindergarten lesson on putting things back where they belong. It's not just about the bathroom, either. Trina Leckie, relationship expert and host of breakup BOOST Podcast, says, "If you are obsessed with cleanliness but your partner has their bathroom mirror splattered with toothpaste or is growing science experiments in their fridge, you will definitely start butting heads." No, you're not selfish. You're just not ready to pick up after someone else and you shouldn't have to.

You Struggle To Envision A Future With Your Partner

If you can't imagine what your life will be like with your partner a few years from now, it's probably a sign that your relationship isn't serious enough for you to move in together. Ideally, couples who live together do so because they anticipate a more permanent future with each other.

You Have Completely Different Schedules

You might not think this is a big deal but Leckie explains that it might actually cause a rift between you and your partner. "If one of you works nights and the other works days, it can be hard to get enough sleep," she says, leaving you irritable and more likely to start an argument with your partner about it. She adds, "It may also become frustrating if you start to feel more like roommates without being able to spend an adequate amount of quality time together." If your current arrangement works just fine, don't ruin it simply because you feel like you have to live together to be a serious couple.

You've Never Gone Away Together

It's a good idea to go away together before you move in together because the two experiences can feel relatively similar. Think of it as a test run for the real deal and be honest with yourself in assessing whether or not you'd like to turn a weekend into a lifetime (or a one-year lease).

You want to live downtown, close to campus and your part-time internship. Your partner wants to live in a house in the suburbs so he can be closer to his parents and their family dog. This is basically every episode of every show on HGTV. What you don't see on HGTV is how annoyed the compromising party is when they find out that house in the suburbs is actually nowhere near a subway stop and that they have to carpool with their partner's parents from now on. In fact, Leckie says, if you and your partner fight a lot about general things and not just about where you should live, moving in together will only make things worse. All I'm saying is, know your limits and respect them.