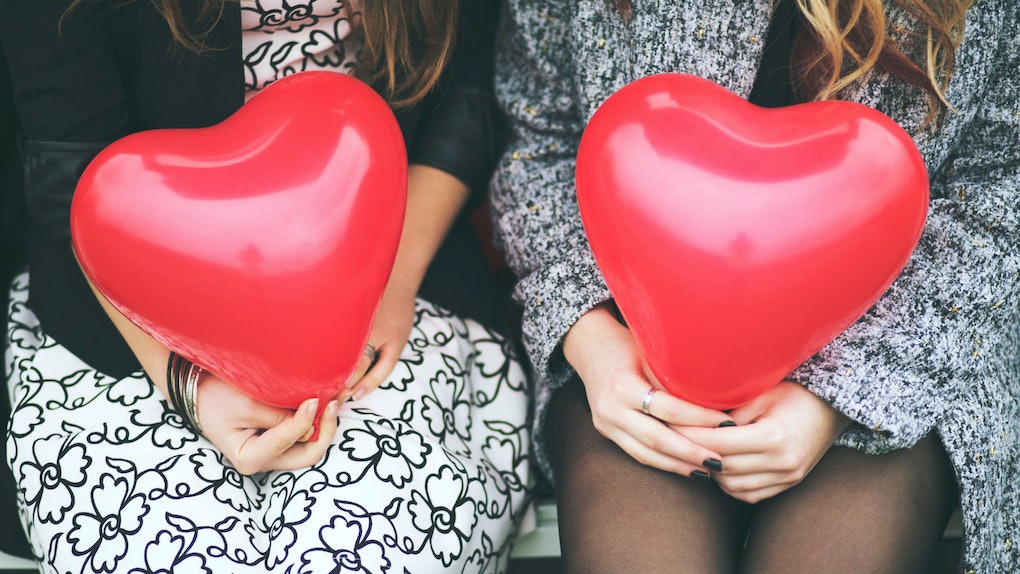 Wedding season is winding down, but my social media feeds are still full of posts from glowing newlyweds about how lucky they are to be in love with their best friend. So many times the phrase "just friends" can be used to let someone down easy, but what if being just friends can actually lead to something much more? Like, say, a gushing Instagram caption about your life partner? Don't believe me? Just read these quotes about falling in love with your friend and I dare you not to melt like Pinkberry in August.

I reached out to several people who are happily in love with their partners, who were formerly "just friends," and while everyone had a different story, one thing was consistent: friendship. The bedrock of each of these relationships is a long-standing friendship, clear communication, and a mutual respect. Transitioning from friends to lovers can be tricky, because if the whole lovers thing doesn't pan out, then you're not only minus one lover, you're minus a dear friend. But take heart, because these babes figured it out. Now, let's melt.

Alex and I had been friends for about five years before we started dating, and in that time I'd never really thought of him as anything but a really good friend and someone I just genuinely loved being around. (I was also in a different relationship for the entire duration of our friendship.) ... About a year after my ex-boyfriend and I broke up, it took me by such surprise. We admitted we liked each other and as cliché as it sounds, everything just immediately... clicked. Looking back, we both always talk about how we had spent years building a friendship together, and getting to know each other in an unromantic light made us realize in the end how much we were attracted to one another.

I first met my fiancé when we were in the same preschool class, and we remained in the same friend group through middle school and into high school. He was always in my larger group of friends but we were never very close, and he actually dated my best friend during freshman year of high school. By sophomore year they had broken up, and we started talking more over AIM chat... At first, I still saw him as just a friend, but chatting over AIM really allowed me to see that we had a lot more in common than I realized. I think I rejected him the first few times he asked me out, but then suddenly when I'd see him in the hallway at school I'd start to feel butterflies—that's how I knew I liked him as more than a friend. Our first date was dinner at the Cheesecake Factory and then a movie. Thirteen-ish years later, we are engaged and we still love the brown bread.

We basically kept seeing each other at parties and get-togethers, would always chat and have great conversations, and eventually my best friend at the time went on a couple of dates with him. But she wasn’t into it, so I asked her for his number and made my move from there. I was definitely always into him, but he was always dating other girls and the timing just didn’t seem to work at first... Right before we had our first real “date” that preceded him asking me to be his girlfriend, I had a dream about him. He called me later that day to hang out. I can’t remember now what exactly the dream was about, but it was definitely romantic in some way. But this is the juicier part: He claims he also had a dream about me right before we had that first real date, so we basically were both on each others’ minds... and that was that!

We were co-workers for years before we started dating. We were friendly, but not like work-wife/work-husband kind of friendly. We both had other relationships over the years and became better friends — truly work friends, not flirting or crossing any professional boundaries. I think getting to know each other in a setting where we weren't being judged romantically or didn't have the pressure of dating just let us really be our true selves. After years of working together and becoming better friends, we were both single and saw each other out of the office and in a new light.

My husband and I were friends before we officially started dating. I met him my freshman year of high school and he just happened to be my then-boyfriend's best friend, which meant he was always around. He was like a brother in the sense that I felt comfortable around him. And because we also enjoyed making fun of each other! Eventually, my then-boyfriend moved away. But his best friend was still around. The more I got to be around him without the influence of my then-boyfriend or our other friends, the more I started to realize that this guy was nice and funny and adorable. He was such a good person with such a quick-witted mind. We started spending almost everyday together. I was the one who revealed my feelings first ... We started dating. We moved in together. We adopted three cats. We got married last year. I didn't think I'd be marrying the guy that hung out with my ex-boyfriend 15 years ago in high school, but here we are! When you're totally comfortable with someone from the start, it's almost like you feel encouraged to grow and change with that person. It's probably the best decision I've ever made.

Falling in love with my best friend was the most magical feeling because there was rarely ever a moment that I didn't feel 100 percent secure in my relationship with this person, whatever form it took at whatever point in time. When we were just best friends, I knew I had someone by my side who loved me and had my best interest at heart. When we fell in love, those feelings didn't necessarily change; they only evolved into something even deeper. I think I can speak for both of us when I say we were naturally nervous our own feelings may ruin the relationship, but deep down, I think we knew that the relationship we had with each other was more special and had a stronger foundation than anything we'd ever felt before, and we didn't want to lose that.

After reading these stories, you might want to take a closer look at your friends, Beauty and the Beast-style, wondering if "there's something there that wasn't there before." That's not to say the love of your life is already in your crew, but keeping an open mind and an open heart just might lead to you one day typing out a social media post about how you just happened to fall in love with your best friend. Swoon!

This article was originally published on Sep. 5, 2018