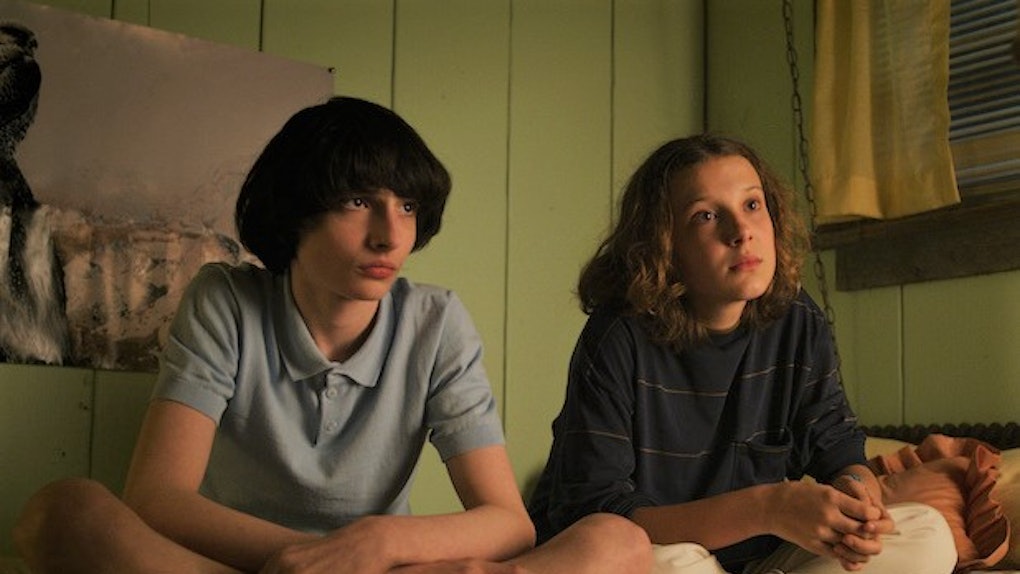 6 Eleven & Mike ‘Stranger Things’ Halloween Costumes That Are So '80s

Ever since Stranger Things premiered in 2016, it's been impossible to go to a Halloween party without someone dressing up as a Stranger Things character. Eleven's Season 1 look has been a fan-favorite Halloween costume for a long time, but the third season just dropped on Netflix in summer 2019, so I have no doubt her Season 3 looks are going to be top costumes this year, too. But since Eleven and Mike are pretty much inseparable, you can't have one without the other, so you know what? They would be a great idea for a couple's costume! Make sure to grab your bestie or S.O. and get to buying because these Eleven and Mike from Stranger Things Halloween costumes are perfect for that Halloween party you have planned.

Eleven and Mike would be the best couple's costume because their fashion was so on point in Stranger Things Season 3, especially if you've got love for '80s fashion. The whole season basically took place at the mall, so you can't not have the characters change up their styles, right?

One of the most fun moments in Stranger Things 3 was when Eleven and Max went shopping at the mall to spend a girls day together. Before Season 3, Eleven's outfits were pretty bland because she had no experience with shopping whatsoever. That's why her first shopping trip was such a big deal. She was finally able to experiment with her look. The result? This funky fresh outfit right here.

Recreating this look is pretty simple, since you can get Eleven's actual dress at Party City.

You can add in some details to your look by letting your hair down and teasing it out a bit for some '80s-style poof, putting on a few bracelets, and grabbing yourself an ice cream cone just like El.

Without spoiling what happens, I'll just say Mike's shopping trip with Lucas and Will was nowhere near as successful as Eleven and Max's.

If you want to dress like Mike for Halloween, start with a yellow-striped polo shirt. This one from Zumiez is perfect.

Then, just add some grey shorts and you're done!

Eleven continued to experiment with her outfits throughout the rest of Season 3. Another one of her iconic looks was this quintessentially '80s, dark blue shirt with a paint-splatter design on it. El accessorized her outfit by adding some blue suspenders and tying her hair up in a half-ponytail.

To recreate this look, start with El's paint-splatter shirt, which you can buy from Fansholiday for $27.

Add some blue jeans, like this pair from ROMWE.

Put on some blue suspenders.

Finish off the look with this yellow scrunchie.

And here's the corresponding Mike look. We all know Mike loves his polo shirts. I'm serious. His whole collection of clothes in Season 3 consisted of a variety of polo shirts. I don't understand how Eleven can have so many cool outfits, while Mike's outfits are just so dang plain. Oh, well. Makes shopping for your Halloween costume easier, huh?

To get Mike's look, buy yourself a teal-colored polo shirt, like this one from ClothingShopOnline, which is only $5!

Pair it with some black shorts.

Then, add some white and gold tube socks, which will definitely give you that whole '80s vibe.

Eleven's most memorable outfit from Season 3 was, by far, the outfit she wore during the final battle when she defeated the Mind Flayer. Obviously, she wasn't going to do that without looking bomb-dot-com. She wore a black and yellow dress shirt with a zigzag pattern and it looked so retro.

Thankfully, you don't have to search countless websites for each piece of this outfit, because you can get most of the look from Spirit Halloween for $30. It comes with a shirt, blindfold, and suspenders. How cool is that?

You can also buy a pair of black pants from Aeropostale for just $16.

Don't forget to add some fake blood under your nose to really nail your Eleven look.

In the big battle scene, Mike wore a green and yellow — you guessed it! — polo shirt. (Polo shirts were legit all Mike wore in Stranger Things 3. The season did take place in the summer, so whatever.) Mike's simplistic style really paid off in the final episodes because, when you're running from a bunch of monsters, you really don't want a bunch of fancy accessories getting in your way.

If you want to recreate Mike's outfit in the final episodes of Season 3, start with a green and yellow polo shirt.

Then, just add some black shorts. These athletic sweat-shorts from H&M are perfect.

I hope these Eleven and Mike costumes gave you some inspiration. Stranger Things has three glorious seasons, which means you have three seasons' worth of Eleven and Mike outfit ideas to choose from, but I hope you go with these getups from Season 3, because they are fashionable AF and perfect to slay monsters in.

Now call up your best friend or S.O. and start buying, because if you recreate Mike and Eleven's style, you'll totally be the life of the party.

More like this
What Is Boo Bash At Disney World? The Halloween Event Has Rides, Music, & Themed Treats
By Cianna Garrison
These Throwback Jennifer Lopez Movies Are Such A Blast From The Past
By Ani Bundel
McDonald's BTS Meal Promotional Schedule Is Packed With So Many Surprises
By Michele Mendez
Stay up to date