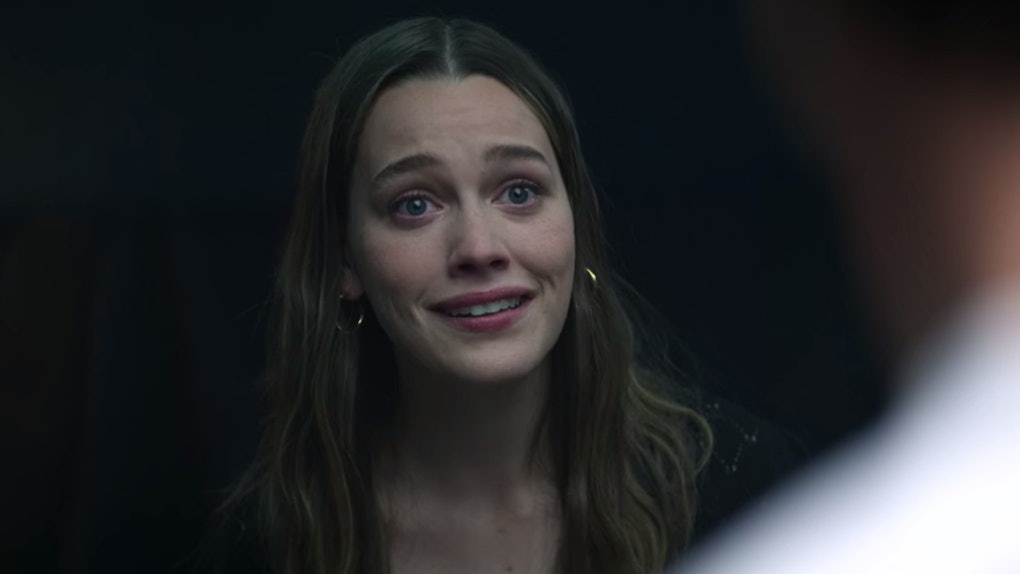 You Season 2 was full of wild twists and turns throughout, but there was one major shock that stood out among all the others, because it pretty much changed everything. Warning: Spoilers for You Season 2 follow. While fans already knew Joe Goldberg (Penn Badgley) had some serious stalker-killer tendencies in his nature, few expected his love interest of the season, Love Quinn, to also be prone to doing dark deeds for the sake of love. However, despite Love seeming like she would end up as just another one of Joe's innocent victims, there were actually a handful of clues Love was a killer in You Season 2 all along — if you knew where to look.

It wasn't necessarily Love's outward behavior that gave away any hints about her dark side. "She is definitely not somebody who brandishes the facts," Victoria Pedretti, the actor who played Love, told Harper's Bazaar about her character. However, while Love might've been unreadable to the other characters (and most viewers screaming for her to run for cover from Joe, for that matter), there were definitely a few signs within the series that alluded toward the enigmatic character's horrific acts. Now that fans have seen the episodes, they'll realize these easter eggs were hiding in plain sight.

The tagline on the Season 2 You poster aptly says: "Meet your match." Before seeing the season, it would be understandable to assume assume the phrase was referring to Candace, who wanted to take him down. Now, it's much clearer this actually alluded to Joe and Love's equally dark and twisted natures.

Much like Beck's brief narration stint in Season 1, Love's inner monologue took over for a hot second in the first episode of Season 2. However, while Beck's descriptions served as a funny reaction to her awkward sex moment, Love's style of narration was a lot more similar to Joe's.

Whenever Joe finds a new target, he acts like he knows the woman better than she knows herself. This is mirrored when Love brings Joe (who she still believes to be Will, at this point) into Anavrin to cook him chicken, saying in her head: "Let me tell you a little bit about yourself, Will Bettelheim. You're not a snob, you're just old fashioned. You like things that are real, made right by people who care. You like strong flavors; gimmicks don't seduce you. What seduces you is the real thing." If that's not a page right out of Joe Goldberg's creeper book, I'm not sure what is.

Love wasn't at all demure in pursuing Joe. The first time they met, her opening line was to ask Joe if the peach she was holding looked like a butt (which isn't exactly a typical conversation starter between strangers). Then, after Joe got a severe sunburn from falling asleep in the sun, she showed up on his doorstep and insisted taking him on a tour of the Los Angeles food scene.

Then there are their "coincidental" run-ins. Sure, fans found out Joe was behind at least some of their meet-ups, but at least one instance, when they saw each other at the DMV, could have totally been staged by Love. If you think about it, Love's boldness when first meeting and getting to know Joe could totally suggest she, like Joe, was willing to take drastic measures in the pursuit of a partner.

4. The Juxtaposition Of Cooking & Killing

Episode 2 had one of the most stomach-churning montages in TV history, featuring scenes Joe butchering the body of the man he'd just killed interspersed with clips of Love cooking up a delicious meal. Looking back on this scene, it's clear the show's writers weren't just trying to ruin viewers' appetites; they were also sneakily helping fans associate Love with knives, hinting at her true nature.

This idea is furthered in Episode 3, when Forty stood on a table in the middle of the room at Henderson's party and drunkenly preached about the concept of "Chekhov's gun," (or Chekhov's knife, as he called it) a concept that suggests if an author (or, say, a TV series) draws attention to something, they should eventually reveal why that thing was worth the attention.

"Sure, she’s cutting an apple right now, but the audience is gonna be subconsciously terrified for the 'human apple,'" Forty said. Since there's no context to explain why Forty was discussing this rule with partygoers, and Love is often in the kitchen dealing with knifes, there's reason to believe this moment from served as a clue to Love's dark ways.

Early on in the series, Love told Joe her about her childhood nanny's sexual abuse of Forty when he was a minor, and then her subsequent suicide. However, in Episode 8, Forty told Joe he actually killed the au pair, but also admitted he didn't remember the incident. The different stories could have tipped audiences off that they weren't getting the full truth about the situation, even possibly hint to fans that Love played a more sinister role in the whole thing.

You know Love's late husband James, who apparently died from a mysterious illness before Joe came into the picture? Well, there's a theory circulating that Love was actually behind his death. First of all, James with Love's desire to start a family. Because it was so clear family meant a lot to Love, it's totally plausible that she was angry with him for this.

Also, since Love works in a grocery store, she could have access to potentially poisonous herbs. Plus, since she's a chef, slipping poison into her bae's food wouldn't have been a hard feat.

And finally, it seems Delilah may have caught on Love's possible kill. Referencing Episode 6, Reddit user inthacut12 made an interesting observation:

When Delilah has her big board of names and pictures and stuff when she's working on her article about Henderson, the camera pans to a paper of an article talking about James. It said something about him being sick.

Totally innocent people don't usually end up on boards about crime, so it seems Delilah had been connecting some dots before her untimely death. Perhaps that's another reason Love killed Delilah in the final episode — to save her past actions from being discovered.

Netflix officially renewed You for Season 3, so viewers will have to stay tuned to see how Love's dark past will follow her into her future.