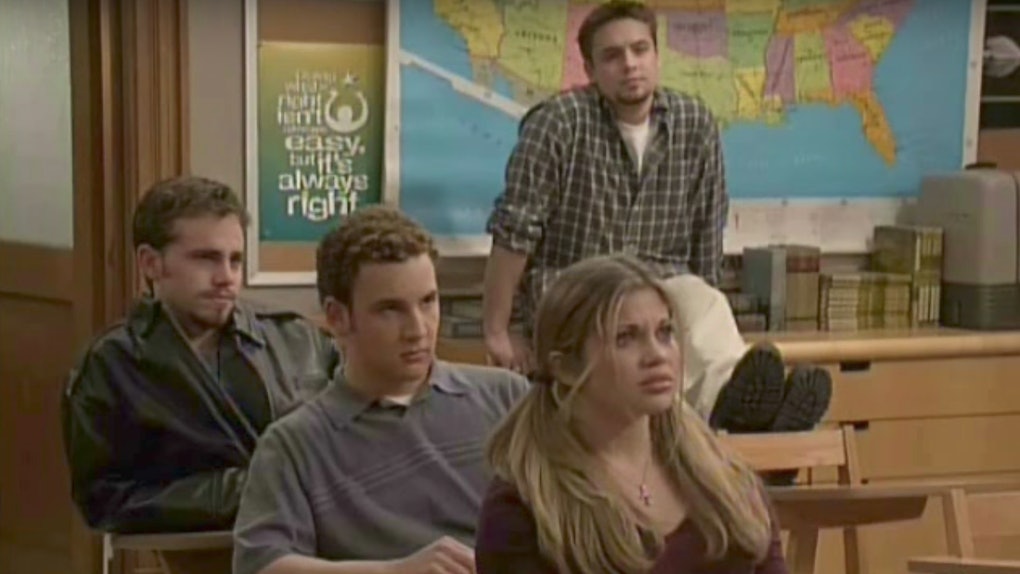 There are very few shows that everyone has seen. There’s Friends, Fresh Prince, and a few other 90s icons that can be universally discussed. A big one, though, is Boy Meets World. Definitely a seminal classic, the story of Cory, Topanga, Shawn, and Eric and their escapades are a key point of our childhood and took up a ton of my screen time growing up. Needless to say, some of the best moments from Boy Meets World, most likely, weirdly define you and your friend group to a T.

There was always just so much love and life lessons to be had in the show that we could all relate to. Cory and his close-knit group of family and friends not only resonated with a lot of audience members, but they were constantly positive and showed the good of things, even when their lives weren’t going according to plan. After the series ended in 2000, I know I personally couldn’t wait until I was in college with a friend group like theirs. I also naively thought all college students had apartments like Eric’s and Jack’s apartment, and that I would find a teacher in high school who weirdly followed me all the way through college (none of which are obviously accurate). But, it was a great, wholesome show to grow up on.

Over 17 years after the final episode aired, I’m still searching for a cute bean-of-a-man like Cory Matthews, but I’ve got the friends down pat. And even though none of us will ever live the lives of Shawn Hunter or Cory Matthews, some of their hilarious encounters are definitely things we can relate to. Out of the thousands of funny moments from their seven seasons, here are just a few that are so weirdly familiar to our daily lives.

1. When Cory And Topanga Threw A “Party” To Show They Weren’t Boring

Sometimes, the party life is just too much for us. We’re only young once, so we can kind of get lost in the college scene, but there are also times we stay home, open some chips, and veg out to whatever is on TV. Well, Cory and Topanga had that life so down pat that they were seen as the boring married couple to their friends. And while (thank God) I’m not married, there can be times where that “boring” life is appealing, if even for just one night here and there. Plus, the sad-but-in-a-semi-hilarious way that they threw their party is so iconic. Those damn quiches sounded good too.

2. When Cory And Shawn Thought About Getting Married For A *Hot* Sec

In the first season, the kids get an assignment to create a “model family." Cory and Topanga are the “parents,” while Minkus and Shawn are the “kids.” When reading Cory’s ideal wife must-haves, Topanga suggests that Cory should just marry Shawn, due to the fact that he fits literally all of those traits. And we have all been them in that moment — slightly drawn to the fact of just calling it quits on the dating world in favor of staying with your gals for the rest of your life, but then realizing it probably won’t end up as the best option. Cory’s “‘Cause our kids would look like horses” line is the perfect cherry on this sundae.

3. When Eric Used His Sneak Attacks To Try And Scare Topanga

In one of the best moments in all of Boy Meets World, Eric tries his darnedest to scare Topanga, who is virtually immovable when it comes down to it. Eric is definitely my pick for funniest character on this show, and this episode highlights it perfectly. And we’ve all had the moment of trying to sneak attack your friend and get a practical joke to work so badly you go to great lengths. And while none of us have dressed up as a couch (I would think), this last scene came up with the best bloopers, so for that, I am eternally thankful.

4. When Topanga And Cory Totally Killed The Song “War”

When you and your friends are at your silliest, crazy sh*t just goes down. It’s bound to happen. And karaoke is one of the best things to do with your crew that elicits the best time and the wildest memories. And while Cory and Topanga tried to sing what Cory calls “a beautiful song,” but failed the first time, the ending of the episode brought down the house with Cory’s dancing and Topanga’s enthusiasm. This clip is the epitome of what Boy Meets World is and also how stupid-silly my friends and I are sometimes.

5. Anytime Eric Yelled “Feeny,” And Went Straight To Him When Things Got Tough

What I like to call a mating call of sorts, Eric Matthews has the best running joke in the whole show: his “Mr. Feeny” yell. The affection Eric has for his old teacher is so palpable, even though he’s usually super silly about it, and this call is one of the most iconic aspects of Boy Meets World.

You’d be lying to yourself if you don’t throw attention at your BFFs like that as well. I love to be across the room from my friend and totally embarrass them by shouting something stupid like, “Hey booboo!” or something. The relationship Eric has with Feeny, in addition to the advice he craves, is also so relatable (even though I go to my gal pals and not my old English teacher).

6. The Opening To End All Openings (Aka, Seasons Four Through Seven)

The show had a different opening for almost every season, and my favorites were season four and beyond (basically any that had the “Boy Meets World” song). The shots they got of the gang were so good and genuine! Popcorn throwing and water tossing has never looked so iconic. Plus, the vibe from it is just a great representation of my friend dynamic, and most likely a lot of other people’s as well. This is truly why it’s such a legendary show.