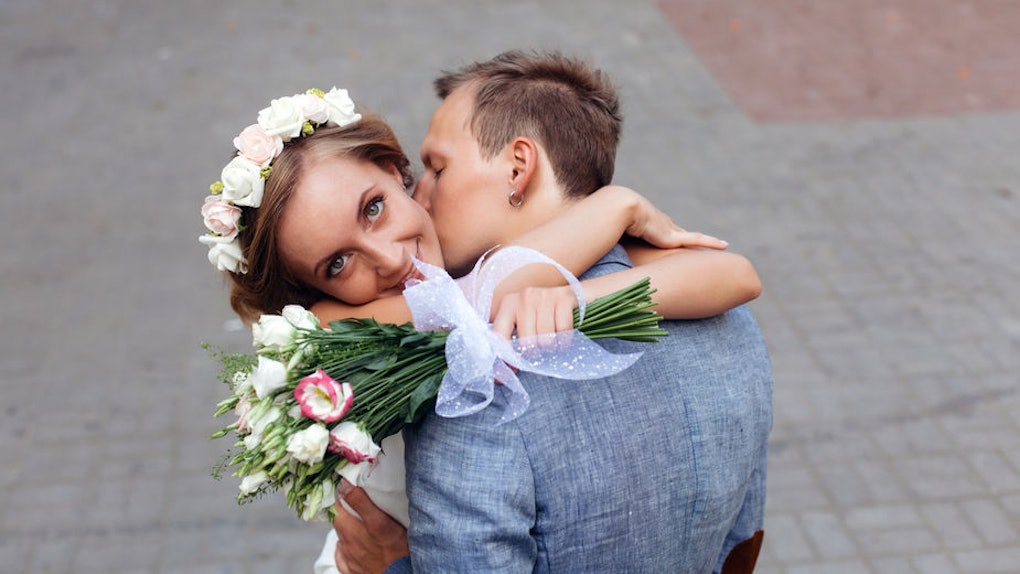 When I look back on the people I dated in high school, I have no regrets that I didn't marry any of them. Some have become very good friends and I love and appreciate them dearly — as friends. But looking back over my dating history (with the help of social media of course), I feel pretty confident saying none of them was "the one that got away." Mostly that's because the person who I fancied at 15-years-old is definitely not the person I'm attracted to today. But for some lucky folks and their stories of lasting high school romances, that early love just clicked and there was no question from the start that they were meant to be together.

As grateful as I am that I didn't stay with my high school partners, deep down I'm secretly a bit of a romantic, so when I read the stories some of these high school sweethearts shared on Reddit about how they found love and stayed together over the years, I can't help but swoon a little, and believe me, you will too. These are folks who have been through some good times and some really bad ones, but they got through them together thanks to an enduring love that started when they were just kids. Seriously, folks, grab a tissue, it’s about to sentimental up in here.

When you know, you know.

We knew we wanted to get married, and one day we kind of looked at each other and were like "what legitimate reason is there to wait besides social expectations?" I graduated in June, turned 18 in November, and we got married in January so we could keep the same anniversary. It's been five years now.

It feels like it's always been me and David going on adventures and getting up to s—. We're partners, in every sense. We've been through unemployment, college classes, living under the poverty line, working two jobs and sixty hours, depression, sickness, hospital stays, the death of our first child, and now the birth of our second child is only 8 weeks away. We fit a lot of living into 5 years, and the rest of our lives will likely prove just as interesting. I've known him since I was 14.

Sometimes you just have to make the first move.

We met when he was a senior and I was a junior at Model UN. I waited for two days for him to ask me out. When he didn't, I did, which was something extraordinarily out of character for me and the best decision I ever made. We have been together 20 years and married for 14. We have a 4 year old son. Life is rocky right now, but I would rather have him with me than smooth sailing with anyone else. I love him so much and am grateful for him every day.

The one that almost got away.

We dated in high school. One day we were walking into a McDonald's after school and he held the door for this adorable elderly couple and smiled at me and said "that's gonna be us some day." That freaked me out. I was only 16 and the thought of being only with one person forever from that point on scared the crap out of me. I subconsciously started sabotaging the relationship until I finally broke up with him.

We went our separate ways and lived our lives. I ended up meeting someone and getting engaged. Then one day about 5 or 6 years after graduation I was in the bank drive thru and he (my highschool ex) was in the car next to me. I shouted his name and he looked over at me and gave me the biggest grin ever. We exchanged as many pleasantries as the situation would allow and went our separate ways again. But I couldn't stop thinking about him. It was driving me mad!

My fiancé at the time and I started drifting apart for a few reasons, one of them being I could not stop thinking about my hs ex. It was kind of s----y of me but there was a love there with my ex that had been buried for over 7 years and it was such a strange thing to be flooded with those emotions. So, my fiancé and I split and I moved on with my life. Then a year later I was browsing MySpace (boy am I aging myself here) and stumbled upon his profile. I was a nervous wreck but super excited at the same time, so I sent him a message. He responded and we decided to meet up for coffee. That was 9 years ago. We've been together ever since. Our 5 year wedding anniversary is this summer. :)

We met freshman year of high school in PE- we were the last two people in class without partners for badminton. Hit it off, were friends for a year or so, became official boyfriend/girlfriend sophomore year when we were 16. He proposed at 21 in front of Sleeping Beauty Castle in Disneyland on New Year's Eve, we were married almost two years to the day later on New Year's Day, and we celebrated our 10th wedding anniversary this year. We have a beautiful home, 4 awesome kids, and are each other's best friend. Sometimes young love does work out. :)

That time the grass really was greener on the other side of the fence.

My wife likes to say she found me in her backyard.

One of my best buds back when I was 16 told me a girl he knew just moved into the neighborhood, like all 16 year olds who hears there is a new girl in the area I suggested we go to the store and walk by her place to see this new girl. So we walk by her place and she is in her backyard with 2 of her friends, we hopped over her fence, my friend introduced us and shortly after that we started going out.

Funny thing, turns out we actually did meet previously, at her parents house one day they did the typical play videos of your child to embrace them in front of their boyfriend/girlfriend thing by playing a VHS of her Preschool graduation ceremony, and in the video we see 5 YO me beside 5YO her singing songs and holding hands.

We graduated High school together, moved away for University together and lived together ever since.

We got married on the 10th anniversary of our first date and since then have had a beautiful 2YO boy and are expecting our second child this summer. We have had good days and bad but we have taken on them all together.

I’m not crying, you're crying. These aren’t tears, it's just raining here, on my face, a little bit, inside my house. Ahem.