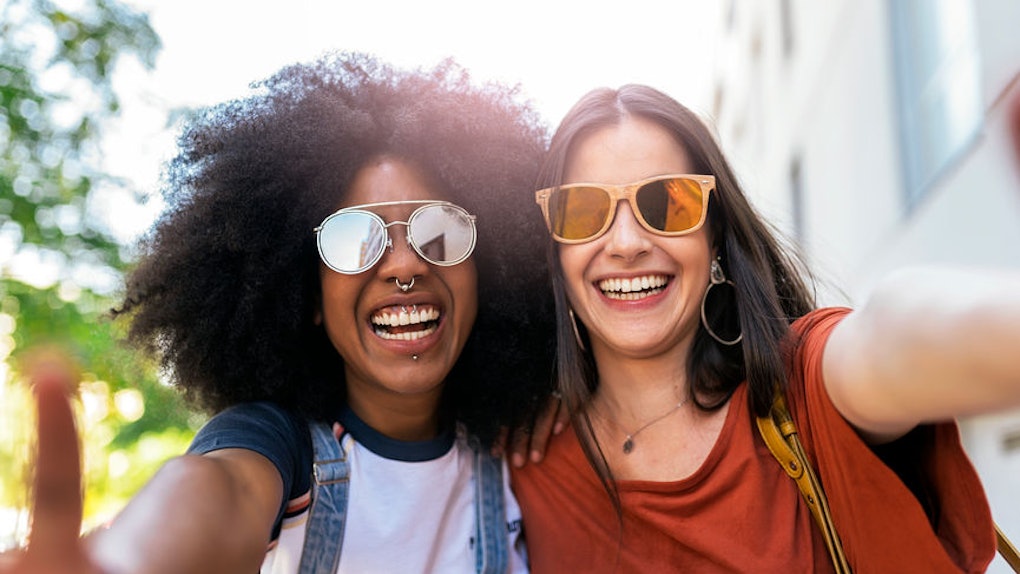 5 Signs Casual Dating Is For You, Because You Don't Need To DTR

There are likely going to be times in your life where you really want a committed and serious relationship. However, there are probably also going to be times when what you want is to just have fun and date a lot of different people with no strings attached. If that idea is really resonating with you right now, chances are you're showing one or more signs casual dating is for you, so you don't have rush into anything serious if that's just not where you're at right now.

First things first: What exactly is casual dating, anyway? According to Chris Armstrong, founder of the relationship coaching company Maze of Love, it can actually mean a couple of different things. "Dating casually means to date with no expectations of finding a long-term relationship. To some people, it can also mean to date with no desire of finding a long-term relationship. In either case, casual daters are able to let go of the traditional expectations, pressures, or frustrations that can come from dating," he tells Elite Daily. Does that sound like it might be a good fit for you right now? Here's are some signs that casual dating is right for you, according to experts.

1. You crave lots of different experiences.

One of the benefits of keeping things casual is that you're free to date lots of different people and have new experiences. So, if your priority is experience over commitment, Armstrong says that's a sign that dating casually is a good fit for you. “There are points in some single peoples' lives in which they want variety and spontaneity that, for them, cannot come with dating the same person exclusively,” he explains.

2. You recently got out of a relationship and you’re not ready for anything serious yet.

Dating casually is also a good way to get back out there again after a long-term relationship, NYC relationship expert and love coach Susan Winter tells Elite Daily. “Perhaps you're newly single and haven't quite gotten your footing in what you want in terms of a new partner. [You may] need to play the field in order to get a sample of what's out there, and how the dating world has changed since they were last single,” she explains. By keeping things casual, it removes a lot of pressure while you get comfortable with the single life again.

Armstrong adds that casual dating is also a way to help you move on during the time between rebounding from a past relationship and the point where you are ready to seriously find love again. When you have "truly moved forward from prior relationships and are not ready for a new committed one, casual dating is both freeing and self-discovering,” he explains.

We all pick up dating habits over time, some of them are good, and some… well… not so much. By dating more casually, Winter says you give yourself a chance to break and unlearn some of the habits that aren’t serving you. “If you're actively trying to break bad dating habits, casual dating allows you to test new ways of interacting with prospective partners. Have you had an issue with speaking up? Now's the time to try it out when the stakes are low. Have you had a hard time establishing boundaries? Start fresh with a new partner where the pressure is less daunting,” she suggests.

4. Your life circumstances make being in a committed relationship unrealistic.

Timing is another essential part of whether or not a committed relationship will work, and there may be times in your life when something serious is just not feasible. Winter says that dating casually during these times means you don't have give up your love life just because, at the moment, you can’t give your all to a new relationship. “Casual dating is also an option when you're on the move; such as about to go to college, graduate from college, or make a physical locational move for work. It's a way to keep active and busy without placing demands upon yourself or the other person,” she explains.

For some folks, dating more than one person at once can feel weird. But that doesn't always have to be the case, especially if you're open and honest about your intentions. If that feels like something you're interested in, then Armstrong says that's a sign. “When casual dating is healthy for someone, they won't feel conflicted about going out with Jennifer because the thought of Melanie is weighing on their mind. In fact, there will be no weight of Melanie because they can truly and healthily compartmentalize different people,” he explains. The other side to this, Armstrong explains, is that you have to be OK with the fact the people you are dating are fee to see other people, as well. “Someone who is going to try casual dating has to be secure enough in themselves to know that the same people they are having casual relationships with are, themselves, going to be seeing other people,” he concludes.

If these signs are resonating with you, it's probably a safe bet that you just want to have new experiences and meet lots of new people without any pressure. As long as everything is consensual, there is no wrong or right way to date. It's just about being true to your heart and being honest with the people you're seeing about your needs and intentions. The same holds true for when you decide you’re ready to get serious again. In the meantime, don’t be afraid to just relax, keep it casual, have some fun, and see where it goes.