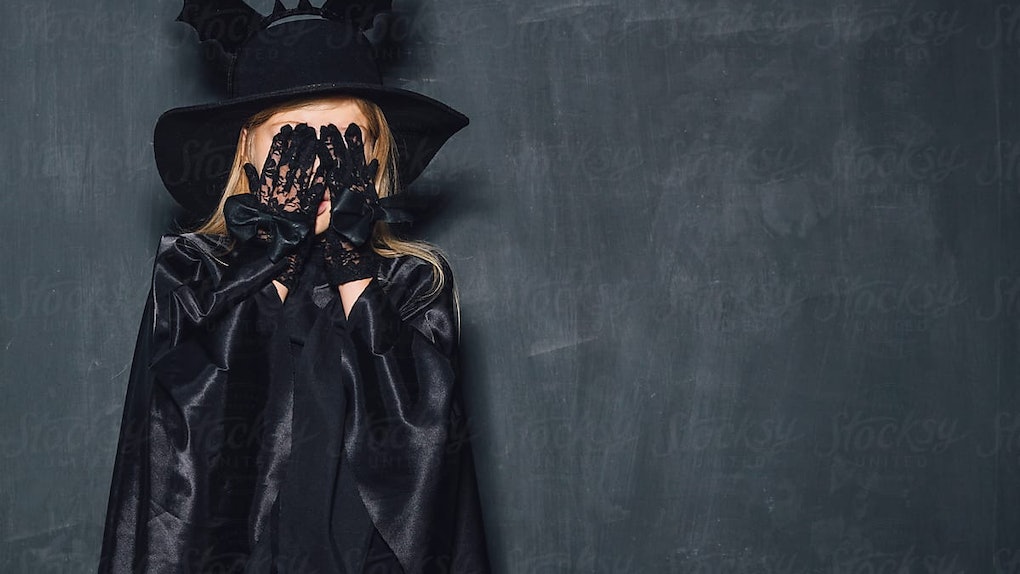 5 Sexist Halloween Costumes To Avoid In 2018, Because You Know Better

I'm going to be upfront: Halloween is absolutely my favorite time of the year. From the crisp fall weather to the exciting nightlife, this spooky holiday is the perfect excuse to let your hair down and just have some good ol' fashioned fun for the night. However, picking Halloween costumes can be tricky, and you want to make sure it's an outfit that's tasteful and cheerful. So, for those still racking their brains about what costume to choose, here's a list of sexist Halloween costumes to definitely avoid this year.

It's no secret that Halloween costumes for women have tended to lean towards "sexy this" and "sexy that," but while some people may enjoy that flash of skin, some costumes definitely have sexist undertones to them. Not only that, but there's been a few Halloween costumes that have been popping up over the past few years that are definitely not OK. Just take the Kim Kardashian "robbery" Halloween costume from 2016 as an example, which showed the business mogul blindfolded, bound, and gagged in a bathrobe. Not only is that inhumane on so many levels, but it's a clear example that people sometimes make bad calls if it means showing off a "trendy" Halloween costume.

That being said, this can get tricky. It's OK — this list of costumes to avoid this year will help you have a fun and completely unproblematic Halloween this year, with nothing to worry about but the Halloween spirit.

Ladies, I'm all about strutting your stuff and feeling confident on Halloween (I see you, sexy unicorn), but there's a few costumes that just aren't OK to wear.

Take the "sexy schoolgirl" Halloween costume as an example. I can't be the only one who thinks this whole costume has got to go. Not only does this costume sexualize and fetishize young girls (ick), but it gives the message that women are all beauty and no brains. It's always nice to feel confident and great in your Halloween costume, but this one definitely crosses a line.

Ladies, show off that skin with pride and confidence (and if you want to be a "sexy" anything go for it). However, leave the plaid skirt and pigtails at home.

I.... do I really need to explain why this one is so messed up? I know that The Handmaid's Tale was the "it" show of 2018 (and 2017, if we're being honest) but let's just suffice to say that you really, really shouldn't make a "sexy" version of an outfit that literally denotes sexual and reproductive slavery. I mean, come on. Women are literally wearing the original version to protest attacks on their bodily autonomy, we didn't need a version that included cleavage and stilettos.

Thankfully, the backlash against this one means that its creator, Yandy, has already issued an apology and pulled it from their site. But just in case anyone was thinking of doing a homemade version... uh, don't.

Anything That Fetishizes Women Of Color

Costumes are great and all, but sometimes they can go horribly wrong. It's important to remember that this holiday isn't an excuse to make others feel uncomfortable, and just as costumes can hold sexist overtones, they can also appropriate cultures. Heads up: both are bad.

For example, geishas have often been depicted in Western media as a way to sexualize and fetishize Japanese women, and the associated Halloween costumes aren't pretty.

Sadly, the geisha isn't the only the only women of color whose culture has been turned into a costume. There's been a long history of sexualizing women of color in regards to Halloween costumes, such as wearing Native American headdresses, dressing up as belly dancers, and playing a hula girl.

Cultures are meant to be celebrated, not turned into costumes. If you aren't part of the culture you're portraying, then it's probably best to leave it alone.

Even though married life certainly can't be easy all the time, the concept of "ball and chain" is an exaggerated way to view a wife's position in a marriage.

Not only does this costume portray the woman as the "ball," aka heavy deadweight dragging her husband down, but it appears as if she's keeping her husband trapped from the outside world. I may not be married, but aren't spouses supposed to love and appreciate one another? Plus, the fact that the man is able to hold the chain and basically drag her around is not only sexist, but it leads the woman to lose all of her agency.

Instead, try playing up this precious union by dressing up as newlyweds or celebrity couples. I hear Hailey Baldwin and Justin Bieber are getting hitched soon.

I'll admit, I still can't get Melania Trump's horrified expression during Donald Trump's 2017 presidential inauguration out of my head, and I doubt that I'm the only one. That being said, I've never been a fan of the "free Melania" concept, and the fact that is' being turned into a costume is even worse.

Look, it's OK if you don't like the Trump administration, but leave Melania Trump out of this. Not only does this costume depict her as a powerless damsel in distress, but her over-sexualized inauguration outfit also sends the wrong message. Her husband may be a highly controversial figure at the moment, but since when does a woman have to make up for her husband's mistakes?

Halloween is a holiday that should be filled with fun and joy. So this year, nix the sexist and problematic costumes and instead find an ensemble that will ensure a drama-free celebration. Happy Halloween everyone!