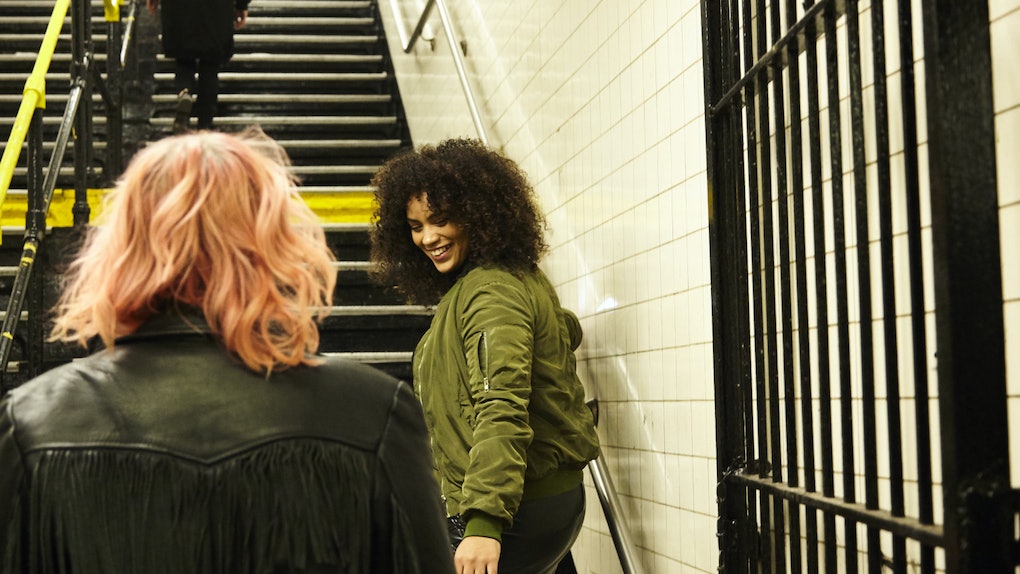 I'll be the first to admit the only New Year's resolution I've ever kept was one I made at the end of 2016, when I resolved to royally screw my life up more than I already had the year before, because that's the only resolution I knew I could realistically succeed at. I get it, my dude. New Year's resolutions are hard to keep, especially when 3 p.m. on Jan. 1 rolls around and you've been resolution-ing for a whole five hours. YOU'RE TIRED. But if you're looking for resolutions to date more in 2018, then look no further, my friend, because I've absolutely got you covered.

I won't be dating more in 2018 myself, mostly because my girlfriend would actually murder me (hehe, love you), but for all you single pringles out there, these resolutions for dating more will push you to the point of exhaustion new-year, new-love-life territory faster than you can drunk text your ex on a night out. Before you know it, you'll have the confidence to know you're a totally amazing catch, the courage to make the first move, and the patience to sift through at least 929,458,034 mediocre messes of a date. Because once you get through those 929,458,034 snooze-fests, you will 100 percent find the one person who will make you say, "Wow, finally, someone worth putting a bra on for." (LOL, just kidding. Nothing is worth putting a bra on for. Bras suck. But you get it.)

So here are five New Year's resolutions for dating a hell of a lot more in 2018. Get yourself someone who makes you want to put pants on and venture outside this year.

1. Swipe Right On The People You Wouldn't Normally Swipe On

Right now, it's winter, which means it's cold, which means you're probably curled up under 15 blankets at home. While you're there, grab your phone with the 10 dating apps on it and swipe with an open mind. What I mean is, if you only swipe on people over a certain height, with a certain color hair, with a certain job, a certain shape of their nose, and a certain preferred shirt color, cut that out.

There is absolutely nothing wrong with swiping on an app to find a date. Seriously, anyone who tells you that is wrong and probably also believes the Earth is flat. However, I will say that meeting people IRL is still a thing. I, a real-life, iPhone-wielding millennial, met my girlfriend IRL. It's possible, believe it or not. But to do it, you've got to leave the confines of your apartment.

I know, I know, I hate that, too. BUT, the good news is, a ton of the stuff you just do by yourself in your apartment, you can also do on the outside! In the open! Around people! Wanna read a book? Read it in the park. Need a drink? Head to the bar on the corner. Wanna watch a movie? Go to a movie theater and sit next to someone by themselves. Wanna scroll through Twitter mindlessly? Do it outside somewhere! Wanna lie in bed? GO TO A MATTRESS STORE, IDK. The point is, you can do all the things you already love to do outside, where there are tons of likely eligible people for you to go on dates with, which brings me to my next resolution...

3. For The Love Of God, Initiate Conversations With People

So you've either made it outside or you've got a ton of matches on a dating app. Congratulations. You've gotten further with your resolutions than I can ever hope to get. Now, it's up to you to actually put these successes to work by starting conversations with people — both on apps and IRL.

I'm sure you've heard the saying "when you want something done right, you've gotta do it yourself." Well, I hate to break it to you, but for the most part, it's true. There's no point in waiting around for other people to make your wishes come true. You're a badass, independent woman, and you can do that yourself. Say hi to people on a dating app, ask them what their favorite food is, and then ask if they want to go for some of that food together. Compliment the other person alone at the bar on their coat and ask them where they got it. Then, work your way into buying them a drink (if they say yes, of course). If you want something (i.e. more dates), you have to be vocal about it. So start that conversation yourself.

4. Set Goals For Yourself

If there was an award for the least likely to hold themselves accountable for literally anything, it would be me. I've been saying I'm going to clean my room for eight years, and in those eight years, I've lived in, like, seven rooms, and not a single one has ever been clean. If that sounds familiar to you, especially when it comes to goals in your dating life, resolve to end that pattern. Set some concrete, small goals for yourself, and really try your best to keep at them.

Setting a big, general goal like "date until you find a relationship next year" sounds doable at first, but really, going so broad leaves you a lot of room to fall short. Instead, try setting smaller, short-term goals at the beginning of each week or each month: "I resolve to go one date this week," or "I resolve to go on at least four dates this month," or "I resolve to go on at least 3 dates every month this year." These smaller resolutions are easier to achieve in the short term, and by the end of the year, they'll really add up. Pro-tip: Write these short-term goals down. Science says writing your goals down increases your chances of success.

Listen, I love the word "no" as much as the next person. One of the sickest pleasures in my life is when someone literally reaches out to me, wanting to make fun plans, and I say no faster than I can blink because I wanted to stare at a wall alone in my apartment for five hours instead. But if you're trying to date more in 2018, you've gotta start saying yes to things, even if you'd rather stay home.

If your friends ask you to go out with them, say yes and proceed to make out with three people in one night... and then, ask one of those people on a date! If someone seemingly normal and not weird asks you on a date, say yes, even if they're not the type of person you're typically into. HELL, IT'S A DATE. THAT'S WHAT WE WANT, RIGHT? RIGHT. And this year, as part of trying to date more, give your dates more second chances. I don't think I've ever made a good impression on a first date in my life because my nerves get the best of me. But given a second chance, anybody can turn things around.

So even if a first date ends up being as awkward as it can possibly be, if you like the person, laugh it off, and reach out for a second date. Then, that'll be another date down, and another check mark toward actually succeeding at a New Year's resolution. And if you find a pretty great relationship along the way, you can thank me in your wedding vows.