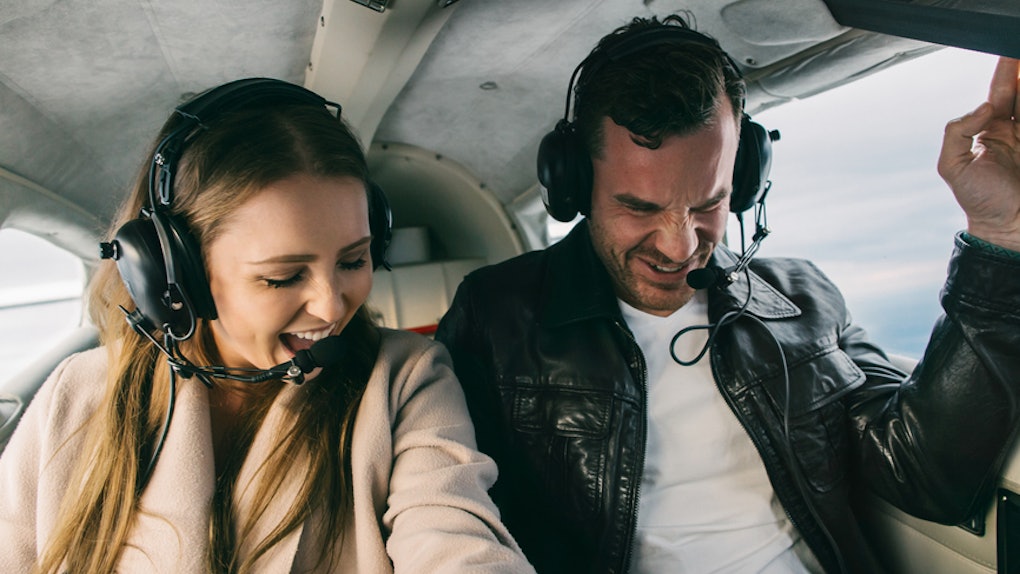 Did you know that both Jennifer Aniston and Ellen Degeneres are members of the mile-high club? I know. I was surprised, too. But their mile-high club stories are pretty spicy (think pilots and cockpits — the works), and they low-key make me want to become a member myself...

For those who may not know, joining the mile-high club requires just one fairly straightforward task: having sex on a moving aircraft (technically once you're at least a mile off the ground). It sounds simple enough, but pulling off in-flight sex is actually a way greater challenge than you might expect.

For one, there are the issues of legality. "The Mile High Club might be exclusive and tempting but consider that while no state law might be applicable if no one sees you, there are surely some number of federal agencies that will find the conduct actionable," Joseph Tully, criminal lawyer and author of California: State of Collusion, told Bustle, "Since 9/11, it’s best not to stretch the limits on airplanes or you risk the unbridled wrath of Homeland Security — not an agency known for a sense of leniency or humor. Destination sex might be a better bet to stay off the no-fly list."

Oh, and have you ever been inside the bathroom of an airplane? Because those things are cramped, smelly, and often covered in questionable liquid — so, like, not the sexiest environment. Also, um, what if a flight attendant (or worse, a small child) catches you and your SO? Yikes.

All of that said, there is something that's just so freaking sexy and rebellious about the thought of getting it on in-flight. And if you're dying to know what the experience is actually like, take it from these five mile-high club members themselves. Some are shocking, others are tantalizing, and a few will make you blush from secondhand embarrassment...

This Legendary Couple Totally Pulled It Off.

A couple years ago, my boyfriend and I were on a red-eye flying from LA to New York on a pretty empty flight, and figured why not? We snuck off to the bathroom at the way back of the plane while pretty much everyone else was sleeping and did it. Literally. My boyfriend's a big guy, so we were pretty crammed in there, and it definitely wasn't the most comfortable or enjoyable sex we've ever had. But it was so naughty and fun! And our friends think we're legends.

This One Might Make You Rethink Joining The Mile-High Club.

One of the most mortifying moments of my life was getting caught doing this. My [girlfriend] at the time and I really wanted to try, so we booked seats on a redeye, thinking no one would pay us any mind. She went into the bathroom and I joined her a minute later. I go in, and since we have been whispering about it and thinking about it for weeks, I am hard and she is wet.... [Then] BAM BAM BAM, the f*cking stewardess is banging on the door and saying, "Come out right now! I know what you are doing in there!" We look at each other in horror and I instantly lose my erection. We button ourselves up and skulk out to major stink-eye from everyone sitting nearby (several people were woken up by the stewardess banging on the door, yelling). Had to sit through the rest of the flight with blue balls and extreme shame. The stewardess pointed us out to the captain as we were getting off the flight. 1/5 would not repeat.

TBH, I Didn't Know That "Flight Simulator Engineer" Was A Thing, But Now I Low-Key Want To Date One...

I'm part of the simulated Mile-High club, if that counts... Interned for an airline company in college as a flight simulator engineer. Took the girlfriend for a ride. Set the simulated environment to nighttime over New York, autopilot, a little turbulence. It was pretty cool.

Eight hours into the 13 hour flight from JFK to Dubai. After that much time in the air, the flight attendants are taking a break and most of the people are sleeping. The bigger 'handicapped' lavatory is up near the flight deck of the A380. She walked into the lav and left the door unlocked. I waited a few minutes and then followed her in. After cleaning up, I walked out and she followed a couple minutes after that. The perfect crime.

This Woman Might Not Have Made The Mile-High Club, But She's A Proud Member Of The Mile-Low Club.

On a trip to Europe from the US, my husband decided he wanted to be a member of the Mile-High Club. It was a pretty full flight, but I decided to amuse him. We never joined the club because we thought it was just becoming too obvious, but...

Suddenly feeling inspired to join the club yourself? Be careful, and let me know how it goes.

*Name has been changed. Quotes have been edited and condensed for clarity.