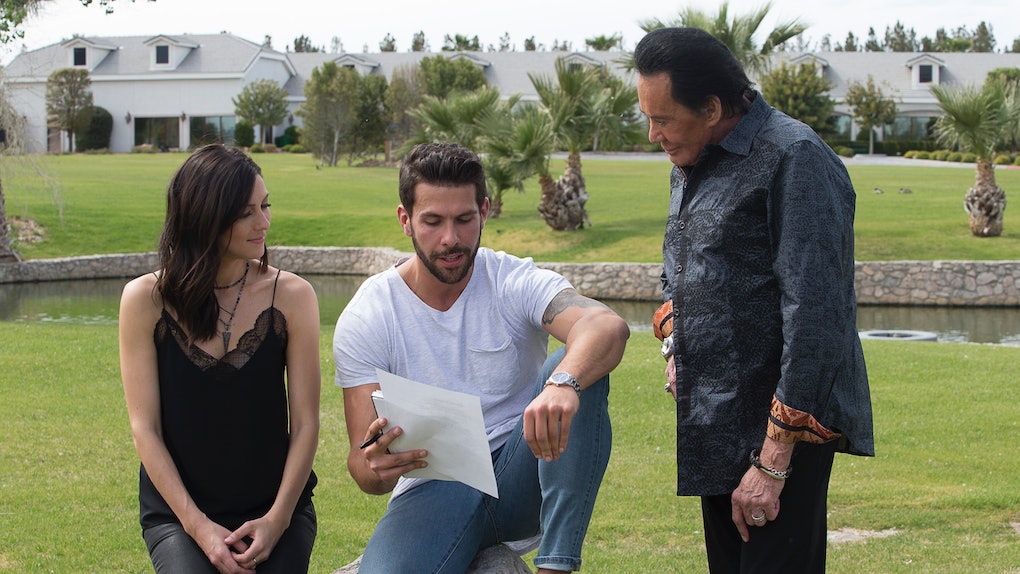 You know when you're 8 years old, you lose at Junior Monopoly, and you start crying because you have the most real money in your piggy bank and thought you'd win? Yeah, that's pretty much the exact temper tantrum The Bachelorette contestant Chris had on national television on Monday night, if you swap out the pre-pubescent investment skills for songwriting-with-Wayne Newton skills. The Bachelorette's Chris Randone had so many red flags on full display during Monday's episode that he deserves a rose for "Most Ridiculous Meltdown On An Episode In Which A Model And A Chicken Had A Two-On-One Date."

Randone's sudden descent into total spiral mode started after the second songwriting group date of this season — yes, second songwriting date. Rather than make the effort to talk to Kufrin at the cocktail party that evening, he thought it best to ride on the coattails of his songwriting skills. Despite being the only dude not to attempt to talk to Kufrin post-singing, when another contestant who did indeed speak to Queen B received the group date rose, Randone got pissed.

He got so deeply pissed that he threatened to leave the show, but not before trying to prove himself the next night. Unfortunately, it seems like his anger was already fully blinding him. When Kufrin asked him if he could really see himself with her, and be 50/50 in a future relationship with her, he replied, "That's something I don't need to think about." Like, what?! Kufrin clearly wasn't loving what Randone was saying.

After that conversation, Randone decided that he still wasn't done trying to prove himself, and walked right on over to interrupt Kufrin's one-on-one moment with contestant Wills Reid. Reid, Bachelor Nation's newest hero, very politely explained to Randone that he had just sat down with Kufrin, and that he would give Randone two minutes — if Kufrin was OK with that — to speak to her before coming back. Of course, when Reid came back, Randone wouldn't move, saying, "Really?!" in the same way you probably said it when you were 6 and your mom told you it was time for you to leave the play date at your friend's house. Reid handled things like a perfect gentleman, and saved Kufrin from Randone's inability to understand when to tamper his impulses.

To be fair, The Bachelorette is a highly-produced television show, and the pressure of on-set producers, as well as the editing, can increase the stakes. That said, there are some major red flags Chris shared with the world that aren't all that far off from some first date behaviors that might make you think twice.

I spoke to renowned celebrity matchmaker Kailen Rosenberg to get her take on Chris' behavior. Rosenberg is an author, Oprah's Love Ambassador on LOVETOWN, U.S.A, and the founder of The Lodge Social Club mobile app, so I knew she'd have some great insight.

1. He behaves as if other people's time is less valuable than his.

It's one thing to run late on a first date and apologize for it, but it's another to truly act like someone else's time is not as important as yours. Randone's inability to understand why Reid was bothered by his interruption deserves a two thumbs down forever. "His insecurities came out," explains Rosenberg. "He has this weakness about his energy and wishes Becca would notice him."

2. He gets angry quickly.

Randone spiraled incredibly hard from, "Things aren't going my way," to "She doesn't want me here, man, I saw the look in her eye, disgust. I looked at her, and like, bro like, she won't even look at me, like, in my eye. Like, that f*cked up, man." (Yes, the latter is an actual quote from the episode.) When people are quick to resort to anger or place the blame on anyone but themselves, it's worth thinking about whether that's the kind of person you actually want to be with. We all have bad days, but constant anger is a bummer.

3. Randone has some growing up to do.

"Chris lacks emotional intelligence and maturity," says Rosenberg. "His insecurities and lack of confidence go hand in hand with his clear form of manipulation." Randone was told pretty directly that he could have two minutes with Kufrin, and then still proceeded to call the situation "unreal" when Reid told him his time was up. Also, Kufrin looked like she wanted to run away from him entirely during both of their conversations. When a person is more in tune with what they are going through than the people around them, it suggests that they're pretty self-involved.

4. He acts like he deserves rewards for being nice.

The "I deserve things in return for the things I do" mentality is always a red flag when it comes to dating. Whether that's expecting sex after buying someone drinks or expecting a rose for being good at singing in Las Vegas, there's something pretty tone-deaf about someone who thinks they deserve anything in return for being a decent human being. "When you are with the right person, there is a calm and comfort that is experienced," says Rosenberg. "And an ability for your ego and your soul to trust moving forward." Randone was quite possibly the antithesis of calm, so maybe Kufrin's not for him, either.

5. He doesn't check in with his date's needs and desires.

Possibly the most egregious part of Randone's behavior was that he never checked in with Kufrin to see if she wanted to talk to him, or to continue talking to Reid. He just assumed that she also wanted to rehash the exact same angst-ridden conversation the pair had just had. Guess he's not so willing to go 50/50 on things after all.

To be empathetic, we're all dealing with different things when it comes to dating, and Randone just may be having a hard time, especially in front of the cameras. "Typically, most if not all insecurity that people exhibit stems from a form of amendment small and/or large, or childhood trauma that never was dealt with," explains Rosenberg. "That’s why people act out in different ways that aren’t quite healthy or enticing to fill that void and heal that feeling so it can come out in different forms of manipulation, control, addictions."

And obviously, being on reality TV is going to bring out some big behavior by design. However, if you notice red flags on a date, it's always OK to ask yourself honestly: Would I give this person a rose? And then proceed accordingly.