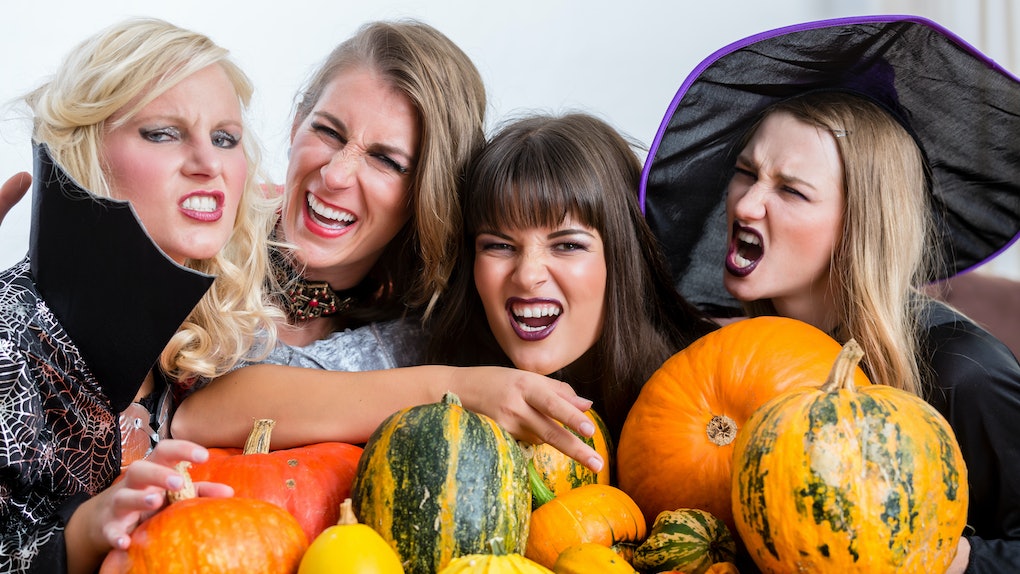 4-Person Halloween Costumes The Whole Squad Will Actually Agree On

Remember when your parents would tell you that you could be anything that you wanted to be? Well, Halloween literally says the same thing to us every year. And if you're feeling super festive, you and a few of your friends are ready to coordinate. Yes, four-person Halloween costumes seem like a bit of a challenge, but there have definitely been way more complicated things accomplished in the Guinness World Records.

So, relax and try to think of things you probably encounter almost every day or have in the past, that would involve four moving parts. Halloween is the time to depict whatever you want, no matter how simple or complex it may be. That is what's so awesome about the spookiest day of the year. The good thing about having a four person Halloween costume is that you won't be alone in fully bringing the costume to life. You'll have some help.

It's a group effort, so get everybody's input, and go from there. Make sure it's something you can all move around in, because synchronized costumes mean breaking out some synchronized dance moves, right? If you need some ideas on how to successfully pull off a costume with four friends, look at how these other people nailed it.

The minions from Despicable Me are so adorable and funny. If you have a group that's already the life of the party, being minions will only further solidify those contagious personalities. Also, since it might be chilly this Halloween, this costume gives you the option of incorporating a comfortable yellow Dave minion beanie.

2. The Members Of KISS

Harness your inner Paul Stanley, Ace Frehley, Gene Simmons, and Peter Criss, and dress up as KISS. Not only will you get to play with some major face paint, but snagging some cute black fishnets is a must. Hopefully you're ready to rock out with your tongue out, because your selfie game is going to need to be pristine for this glorious ensemble. You might have to rock, paper, scissors on who gets to wear the high ponytail, though.

We appreciate all of the seasons, especially since they create a perfect costume concept. You can make the costume super classy and pair it with wedges. Just don't skimp out on the flowers, leaves, and greenery for those more visual seasons. No offense, winter. Get dolled up with this look and show everyone why the seasons are so important and beautiful in their own way.

Since each Fanta girl is so colorful, you'll all seriously brighten up the room. Be ready to be mercilessly encountered by the little jingle that accompanies this look. It's all in good fun. Also, you may need to purchase those groovy white go-go boots and keep them forever. Who knows, maybe you can reuse them for a different costume next year.

If you want to make Michaelangelo, Leonardo, Raphael, and Donatello a DIY project, consider getting some comfy green bodysuits. Luckily for this costume, many of the items won't cost you a fortune and you can keep them for a later use. The head wraps are for sure an innovative enough item that you'll wonder why you didn't purchase them a long time ago.

As blue as you may be as a Smurf, there will be nothing but smiles and high spirits no matter where you all go. Although, there is technically only one girl Smurf (weird, right?), but you can all still rock the blonde wig, white dress, and very blue body paint all night long.

There were plenty of Oompa Loompas, but having just four is still enough to get the point across. One of you can even be Willy Wonka. The dark green wig is basically mandatory for this look, and so is the orange skin which kind of looks like a spray tan mishap.

Clearly, if someone doesn't understand your costume, they can't sit with you. This cult classic has so many one liners, everyone will be dropping their favorites on you all night long. Don't forget the notorious pink polo shirt that Lindsay Lohan wore, even if Halloween doesn't fall on a Wednesday.

Four is definitely not a crowd when it comes to a Halloween costume. Get ready to put the quad in squad.