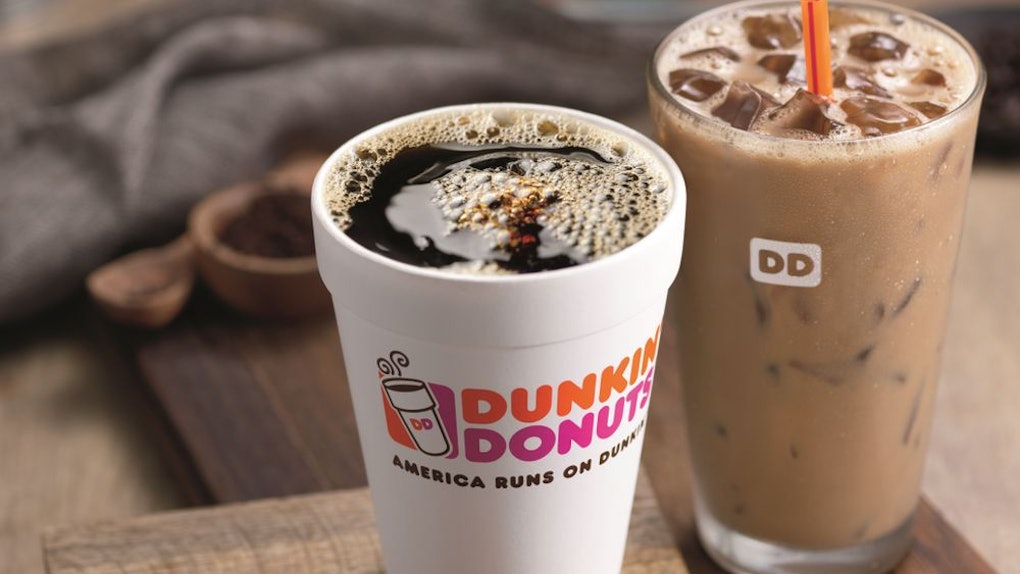 4 Of The Strongest Dunkin' Donuts Fall Drinks, Ranked To Help Perk You Up

Whenever I wake up in the morning, one of the first things I do is drink coffee. It is an essential part to make sure my day get started off on the right foot. As fall gets into full swing, it will soon begin to stay darker for a little longer in the morning (I see you, impending time change). That means I'm going to need a big, bold cup of coffee to keep me powered up all day long. You, too? Here are the four strongest Dunkin' Donuts fall drinks, ranked in order of caffeine content to help perk you (and me) up on those chilly autumn mornings.

In August 2018, Dunkin' Donuts unveiled it's fall menu line up, including a variety of different maple and pumpkin coffees. Sure, changing leaves, comfy sweaters, backyard bonfires, are great and all. But there's nothing like a cup of coffee — hot or iced — that captures the deliciousness that is the fall season. American may run on Dunkin', but I run on caffeine. If you're like me, you're probably curious as to which fall Dunkin' brews have the most caffeine. Well, you're in luck because I've ranked them based on just how caffeinated the brews are. Most of the drinks are chock full with caffeine to you wide-eyed and bushy-tailed from dawn til dusk.

Before we keep going, you should know that the average 8-ounce cup of brewed coffee contains 95 milligrams of caffeine, according to Healthline. All of these drinks included in the roundup below are for a medium-sized coffee from Dunkin' Donuts. That's a whopping 24 ounces of coffee. These drinks will no doubt wake you up, all while offering a tasty sip of fall.

Dunkin’ Donuts Iced Coffee will teach you not to judge a book by its cover, or it did for me, anyway. I assumed this brew would not pack the biggest punch when it comes to caffeine, but low and behold it is the winner.

This fall, Dunkin’ Donuts is offering it’s popular iced coffee with two autumn-inspired twists. You can flavor your iced coffee with Pumpkin Swirl or Maple Pecan Swirl. A medium, 24-ounce cup of iced coffee (in either flavor) contains 267 milligrams of caffeine, according to Dunkin’ Donuts. If it’s too cold for iced coffee where you are, turn up the heat or sit by the fire. You’ll need this one to get you through the cold weather season.

It doesn’t matter if you order it hot or iced — you are still going to get the same boost. Macchiatos are my go-to coffee drink, so I know I’ll be ordering up quite a few of these now that fall is finally here.

So, before I began my investigation into which Dunkin’ Donuts fall coffee contains the most caffeine, I definitely thought it was going to be a regular ol’ cup of coffee. Well, I was wrong.

Dunkin’ Donuts’ brewed hot coffee doesn’t disappoint, though. A medium-sized brew is loaded up with 187 milligrams of caffeine, according to Dunkin’ Donuts. The best part? You can order it with Pumpkin Swirl or Maple Pecan Swirl flavoring for a sweet sip of fall.

Whether you like your lattes hot or cold, the amount of caffeine doesn’t change. In a medium-sized cup, you’ll find 151 milligrams of caffeine in the Maple Pecan Swirl Latte or Pumpkin Swirl Latte, according to Dunkin’ Donuts. I’m definitely going to put this one into heavy rotation now that the cooler temperatures are here.

You really can’t go wrong with any of these fall-themed caffeinated brews from Dunkin’ Donuts. Each drink offers big, bold fall flavor and enough caffeine to carry you through any mid-week slump. Thanks to these autumn offerings from Dunkin’ Donuts, you should be ready to take on anything that comes your way.