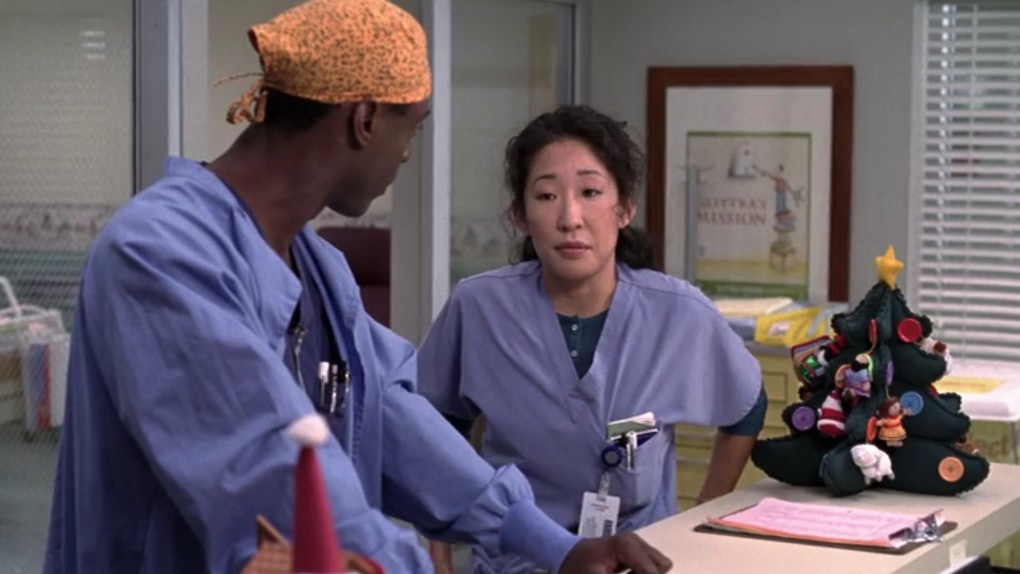 4 'Grey's Anatomy' Holiday Episodes To Watch With Your Person

With 14 seasons of Grey's Anatomy, the series has covered many a holiday season over the years. The soapy show about surgeons is filled with dark, gory moments (as any good medical drama is), but it also has its fair share of moments that celebrate friendship, romance, and family. If you're in the mood for some dark and twisty Christmas feelings, all you need are these four Grey's Anatomy holiday episodes to watch with your person.

Not only is Grey's Anatomy filled with big holiday feelings, but the series' Seattle setting also makes for perfect cozy Christmas viewing. Maybe it's just me, but there's nothing quite like the Christmas-y feeling of knowing it's grey, cold, and gloomy outside, but warm and filled with light inside. Nowhere else captures that feeling quite like the Pacific Northwest, which is why Grey's Anatomy is absolutely perfect for the Christmas season.

So grab your person, a big snuggly blanket, and maybe a bottle of tequila as you settle in for the only Grey's holiday marathon you need. Oh, you might want to grab a box of tissues too. This is a Christmas marathon only for those who like a few sobs thrown in with their "ho ho ho's."

The first ever Grey's holiday episode begins with a dazzling display of Christmas decorations, which is just the visual you'll want to put you in the Christmas-y mood. The series' original softie, Izzie Stevens, decks the halls of Meredith's house, and even eventually gets the self-proclaimed "dark and twisty" doctor to enjoy some of the festivities. Throw in Cristina's Hanukkah celebration with Burke, and this episode has everything you need to celebrate the season.

Meredith's voiceover at the start of this episode right away sets a very Grey's-esque tone for Christmas. She says, "The best gift I ever got was for Christmas when I was 10, my very first suture kit." With more interest in performing surgery than just playing doctor, it sounds just Meredith we know and love. This episode actually features not just one, but three major holidays: Thanksgiving, Christmas, and New Year's, so you get to see your favorite gang of surgeons at every major holiday event of the season, including a big, blowout Christmas dinner at Mer's place and a sing-along of "Let it Snow" in the operating room.

This isn't a Christmas episode exactly, but the characters sure do spend a lot of time talking about Christmas in this one. Bailey is prepping for her wedding to Ben, and she's super preoccupied by his suggestion that they have a Christmas-themed wedding "in a rustic mountain lodge with red ribbons and mistletoe and a tree with ornaments made of our photos." Too bad Bailey thinks the idea is "stupid." It isn't the most festive of episodes, but it is the perfect example of the combo of sentimental and snarky that Grey's always gets so right.

This is a doozy of an episode, but if you're up for it, the emotional payoff is totally worth it. This episode chronicles the year after (SPOILER) Derek dies, so there's an entire year's worth of holidays packed in. Christmas, of course, makes an appearance. But, it's a bittersweet one, with Meredith and her kids missing Derek, and Jackson missing April while she serves in the military oversees. It's definitely tear-inducing, as the show reminds viewers of the loss and sadness that often accompanies the holidays for so many people. But, it wouldn't be Grey's without some heavy emotions, would it? This episode's melodrama and tragedy is exactly what you'd expect from Grey's whether its Christmastime or not.

More like this
25 'Schitt's Creek' Quotes For Funny Mother's Day Captions From Mom's Favorite Bébé
By Rachel Chapman
When Will 'Grey's Anatomy' Season 17 Be On Netflix? Here's What To Expect
By Ani Bundel
'Grey's Anatomy' Quotes That Will Heal Your Broken Heart
By Alexis DeCarvalho and Lexi Williams
Stay up to date