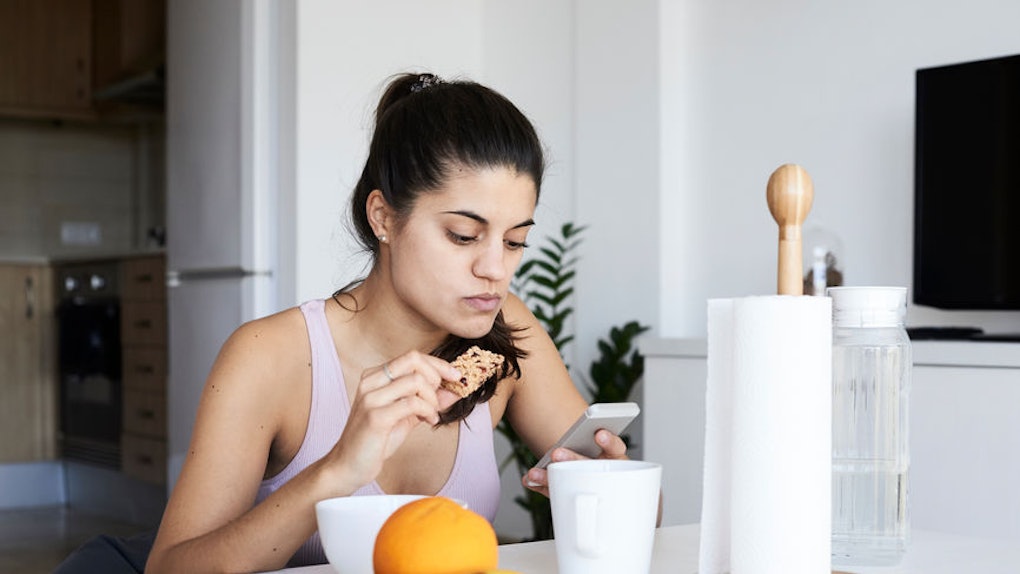 When you work out, do you often feel, about 20 minutes later, a hunger so strong that you could probably finish an entire pizza, a roast chicken, and a tray of muffins? Same, friend. The post-sweat session hunger is so, so real, and it can, at times, lead you to make a strange combination of food decisions that result in feeling, you know, a little gross — as in, why did I just dip tortilla chips in peanut butter and then have a piece of stale bread with pickles? The thing is, finding filling foods to eat after a workout isn't that hard. According to the results of a new study, you just need to do a teensy bit of planning ahead of time to make sure you're fueling your body with the stuff it actually needs.

The new study, which comes from the University of Nebraska-Lincoln, showed that doing just a little prep work before a workout can be helpful when it comes to finding foods that are both delicious and have some solid nutritional value. Here's how the study went down: Per a press release from the University of Nebraska-Lincoln, researchers recruited 256 young adult participants, split them into two groups, and asked them all to go about their usual workout routines. But, before one group started exercising, the participants had to choose between a post-workout snack of an apple, a brownie, or no snack at all. As for the other group, they picked their post-workout snack after they were done exercising, and they were given the same three options.

But you know what? I've definitely eaten a brownie (or three) after a workout, and I probably will again — because I love brownies. The point is, there's no "right" or "wrong" choice here, and neither option is necessarily better than the other. The real takeaway from this study is that you tend to go with an impulsive choice for a post-workout snack if you choose it right in that moment rather than plan ahead.

So, if your goal is to find filling, appetizing, nutritious, and easily digestible foods to eat after a workout, I got you. Below, experts weigh in on some of the most delicious and satisfying foods to prepare for your post-workout treat so that the noms are all ready to go the minute the hunger hits you.

"Most people think that protein is all you need post-workout," Antonio Castillo, a nutritionist/dietitian at Nutrition For Performance, tells Elite Daily. "You want a meal or snack post-workout that has both carbohydrates and proteins."

He recommends pineapple for a boost of sweet carbs, and some protein-packed cottage cheese (not necessarily together, but if you're into the combo, the dairy product brand Hood makes a good mix). "The goal is to have a post-workout snack or meal within 30 to 60 minutes after," Castillo adds.

Peanut butter and jelly (with whey protein for an extra boost)

According to Castillo, a classic peanut butter and jelly sandwich is a simple and super tasty way to get your nutrients after a workout, and for an extra boost, he suggests sprinkling some whey protein inside the sandwich.

"The reason for the carbohydrates is that they are your muscle fuels and you just emptied them during your workout," Castillo explains. "The reason for proteins is to build and repair muscle, plus reduce next-day soreness."

Roasted vegetables with chicken and avocado

"Post-workout, it is very important to supply your body with nutrients and minerals that will help the body recover," Dr. Frank Lipman, an integrative and functional medicine expert, tells Elite Daily. In other words, it's all about eating a well-rounded meal after your sweat session, so keep your plate colorful with some roasted vegetables, along with a hearty protein source like beans or chicken, and top it all off with some creamy avocado to get those healthy fats in.

Tuna salad with crackers or pretzels

"Satiety is usually best achieved by eating real food versus liquids, which digest faster," says Jason Machowsky, a board-certified sports dietitian and exercise physiologist at the Hospital for Special Surgery in New York. He agrees that the body's primary needs after a workout include carbs and protein, plus some fluids and electrolytes.

According to Machowsky, a tuna salad with some whole wheat crackers is a great post-workout option. But, whatever you eat, just make sure you're hydrating enough, and perhaps most importantly, that you're enjoying what you're eating.