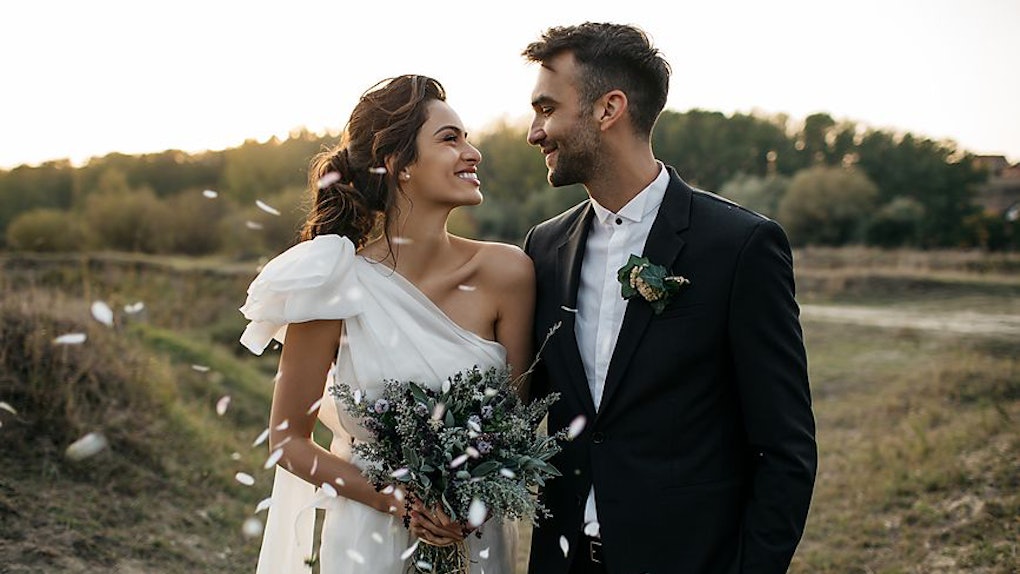 33 Meet Cutes In Real Life That Actually Led To Marriage

My parents met because my dad was best friend's with my mom's little cousin growing up. Then, they got older and wound up running into each other at a party where my mom told my dad to stand guard while he egged her ex boyfriend's house. In that moment, he promised himself he would never get involved with this woman, only to, of course, marry her a few years later, then produce an amazing child (me) with her. Great story, but I wouldn't quite call it a "meet cute." A real life meet cute seems almost impossible when most people in our generation are meeting people on their cell phones, but they DO happen.

Heck, my boyfriend and I met at a bar because he asked where I got my bucket hat. Yep, we met IRL and we have a real life story! But a rom-com level meet cute? Well, those we don't come across that often. That is, until user @Nicole_Cliffe posted on Twitter asking people to post their parents' how we met stories. Oh man, you guys, prepare to have ALL of your faith in love restored. These are 33 of the most adorable stories you will ever hear. And the best part? They're REAL.

He took the wrong bus for months just to be near her.

Her dad was in a competing air band with her mom's boyfriend.

Her mom fell on ice and her dad made fun of her.

They were high school sweethearts (who also happened to be super hot).

Their initials made them destined to be together.

Their friend set them up.

Her dad forced her to go to a dance, then he ditched his date for her.

They were both selling encyclopedias door to door.

He dumped his girlfriend of two years for her.

They were both marine biologists who met at the beach (classic!).

They met on a blind date to a pool party, but he didn't know it was a date.

They were both in the same CIA training class (yeah, really).

She lost a pool game and, as a result, had to ask the first guy she saw to dance.

She was his best friend's sister.

They lived across the street from each other.

They met at a company softball game.

They were platonic roommates for years before they dated.

She met him right before making her final vows to become a nun.

She was a bank teller and she thought he was trying to rob her bank.

She kept seeing him even though she thought he was a "degenerate."

She was ironing pants at a fundraiser, so he brought the same pants to get ironed every day to see her.

He asked her for a ride.

She was dating his housemate but switched to him because he had AC in his room.

They were set up by her Russian teacher who pitied her.

He was stocking milk in a New Jersey grocery store and she wanted some milk.

She dated him in high school, even though he was so not her type.

They met in the waiting room of their therapist.

He picked her up when she was hitchhiking. Oh, and also she was engaged.

They met at the gym.

They were each other's rebounds.

He charmed her parents when he was only 11 years old.

They met on a blind date and he took her out in a convertible.

They got set up by an Elvis impersonator.

OK, well, for starters, I'm kind of mad I don't know any Elvis impersonators. But mostly I am just overwhelmed with a ROLLER COASTER of emotion after reading all these.

Did your parents have a greet how they met story? Go comment it on the thread! I'd love to read.