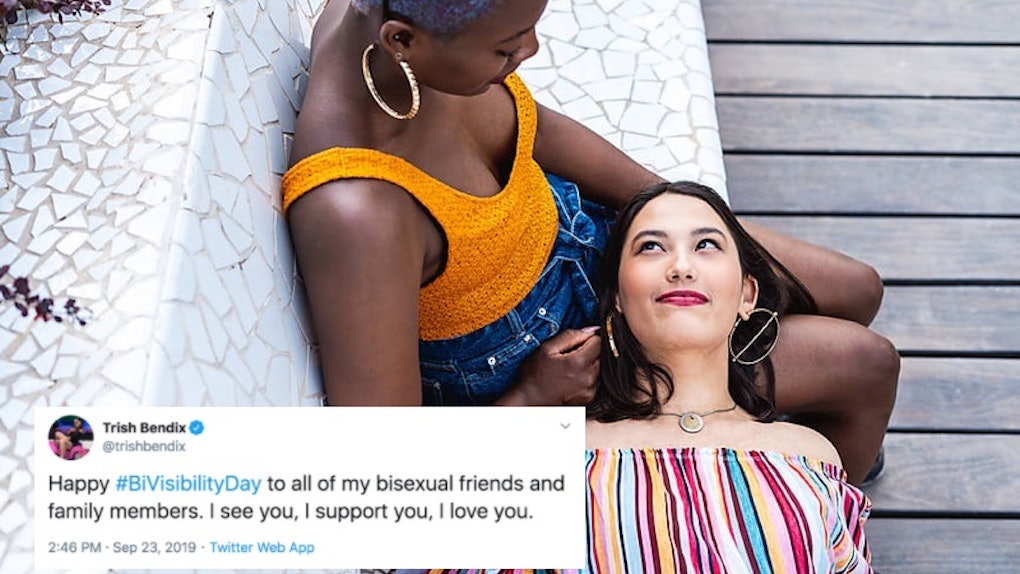 As a bisexual person who's been out for a few years now, I'm still not over the feeling I get during big, unapologetic displays of LGBTQ+ pride. The wonder of Pride season hasn't gotten rubbed off for me yet, and neither has the digital outpouring of love that happens when an LGBTQ+ visibility day, week, or month pops up. Sept. 16 through Sept. 23 marks Bisexual Awareness Week, ending with Bisexual Visibility Day on Sept. 23. Scrolling down my timeline today, all the tweets about Bisexual Visibility Day made my heart feel like it was going to burst.

To clarify, Bisexual Visibility Day isn't just for people who identify as strictly bisexual. It's for pansexual individuals and folks who identify as sexually fluid, too. Whether it's someone coming out online (I still remember my first nerve-wracking time using the "B" word to refer to myself publicly), clapping back on bi-phobic haters, or simply flexing on the TL, each post has made the hell-site called Twitter feel a bit safer and softer.

And, coincidentally, the café I'm sitting at as I write this is playing "Valerie." Sung by bisexual icon Amy Winehouse, it just feels like an almost-too-perfect Bisexual Visibility Day mood. Here are 33 tweets that capture the joy and resilience wrapped up in what it means to be bi.

Defending your fellow bi friend isn't a bad way to come out, if I do say so myself.

But thoughtful hair, makeup, and fashion choices aside, bisexuals are just cute and wonderful as a whole. And today's the day to remember that!

Because the idea that bisexuality is "just a phase?" Absolutely tired!

The official Brooklyn Nine-Nine Twitter reminded us of Rosa Diaz's very own on-brand moment, when she came out to the precinct. If I hadn't come out yet, I would've definitely taken a page out of Rosa's book by sitting my friends down and giving them exactly one minute and zero seconds for a coming-out Q&A.

Nick Morrow, deputy communications director for queer advocacy group Human Rights Campaign, reminded Twitter that bisexuals are the largest group in the LGBTQ+. So if you're bisexual, know you're not alone!

Singer and pianist Amanda Palmer popped in to Twitter for a Bi Visibility Day selfie, mid-tour.

So did journalist and author Ashley C. Ford.

And queer media watchdog group GLAAD (aka the Gay & Lesbian Alliance Against Defamation) blasted Twitter with hearts in the bi colors, which feels about right.

Reminders That You Are, In Fact, Valid

Often bisexuals and pansexuals are told — by straight people and gay people alike — that their identities are invalid. A healthy amount of tweets on Bi Visibility Day were notes-to-self and PSAs to others that bisexuality is valid.

Your bisexuality can encompass whatever you want it to.

And if you feel like you're bisexual and you're comfortable with the label, then you are. You don't have to have sexual or romantic experiences with different genders to justify who you are.

And last but not least, you don't have to "look" masculine or a certain way to be a queer woman if you don't want to.

Although it's not always easy being bisexual, pansexual, or sexually fluid, know that you are loved, admired, and ready to be embraced by a diverse community — on Bisexual Visibility Day, and the rest of the year.