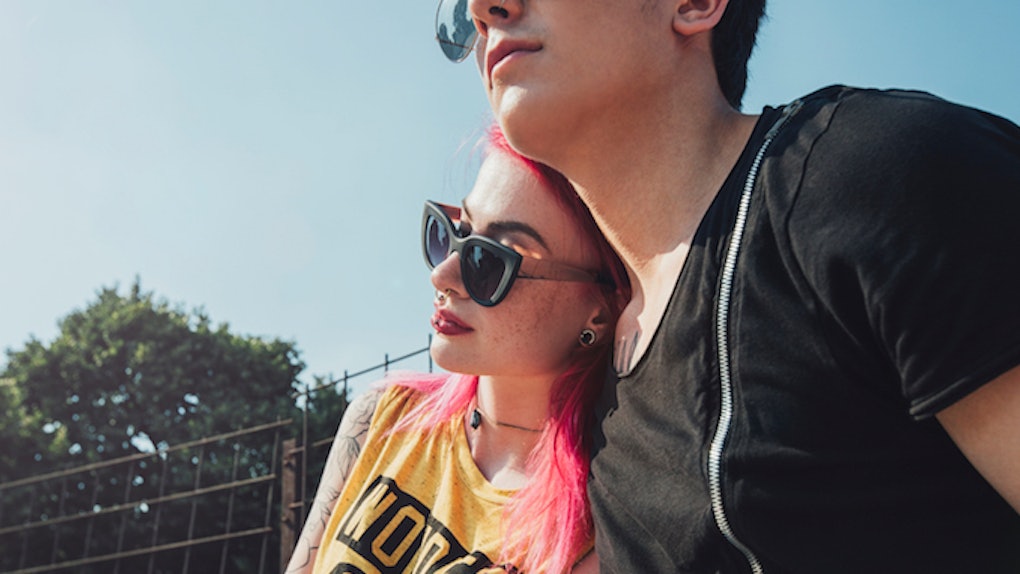 There's this misconception that exists about being queer; it suggests that once you come out, you're done telling people you're not straight. That isn't true. Because assumed straightness is a thing, when you meet new people and if they think you're straight, you may want to tell them otherwise. Times where this comes up often? Dating. People you're dating (or interested in dating) only know what you tell them, or what they can glean from a quick Google search. For women who have had to have that conversation in particular, I took to social media to find out how queer women share how they come out when dating.

After getting out of a four-year relationship with a guy, coming out, and then beginning to date, I've realized that the coming-out process is constant, especially in the dating world. Because I usually don't mark my dating profiles with declarations of my queerness (my bio usually contains something short 'n snarky), going out with guys sometimes can lead to an awkward feeling of debating whether to tell them I'm queer or not (or whether I even owe it to them to).

To see how other women on the LBGTQ+ spectrum deal with coming out to guys they're dating, or have dated in the past, I sought answers on social media. Here's what some had to say.

For Bethenny*, the conversation happened naturally.

"There was a guy I went on a few dates with after I had just ended a relationship with a partner who was gender fluid," Bethenny*, 27, tells me in an interview for Elite Daily. "That relationship allowed me to come out to myself and family as pansexual/queer."

Bethenny says that the conversation with the guy came up because they were talking about their dating history, and she described her ex with gender-neutral pronouns. He picked up on it.

"He was progressive enough to catch the pronoun shift," she says. "He was really chill and it never really came up unless I brought it up, but it never felt awkward."

Bethenny shares how when she began her relationship with the first female-identifying person she dated later on (her now ex-fiancée), coming out about the fact that she had dated guys before her "proved to be more challenging."

She says that it was "entirely possible that I was more sensitive and almost felt like I [had] something to prove to her," since her partner had exclusively dated women.

Expressing to a straight male partner that you're queer can be difficult when you aren't completely sure about your label or sexual identification – just that it's not technically straight.

E.B., 23, had these same concerns when she began dating her best friend in college. After coming to her own self-realization that she was somewhere on the LGBTQ+ spectrum in high school, she began to identify as bi, then as pansexual, and finally felt that "queer" was right for her. She vocalized her queerness to her best friend, unsure if she was attracted to men at all, but wanted to try dating him and see where it went.

"I felt like I needed to set some boundaries and not erase any parts of myself, which is why I told the guy I started dating about my sexuality, and that I was still attracted to and wanted to date women," E.B. tells Elite Daily. "He was accepting, but also confused and a little concerned and stressed about me cheating on him with a girl, or not being attracted to him because he’s a man."

E.B. explains that her attraction to him wasn't due to his gender, but because of their bond they already had together.

She says that being with him "definitely didn’t erase or undermine [my] love for or attraction towards women, or my identity as a queer woman. I was very intentional about reminders that I’m not straight, and affirming my identity. It was hard to find a balance between talking about my queerness in a way that affirmed me but didn’t make him feel insecure that I might leave him for a woman, though."

When Anna, 24, was with her boyfriend for about a year, she decided to tell him she was bisexual. She had "dropped hints" that she was attracted to women in addition to men, and was vocal about her support for the queer community prior to coming out – her thesis was on LGBTQ+ rights.

"It came up organically when we were talking about women's fashion," Anna tells me in an interview for Elite Daily about a relationship she was in for years. "I think I made a leap from how I dress to mentioning the style of a girl I had a crush on in high school."

In that relationship, Anna and her boyfriend discussed her queerness in relation to politics, to women they both found attractive, and whenever Anna needed to talk about it.

With another relationship Anna had with a different guy, she told him after they ended things. The two remained friends after breaking up, and they later had a conversation about other people they'd want to date – Anna said she wanted to date girls.

He replied to Anna, "Wait, really?" and then the two talked more at depth about her sexuality.

"I think I blindsided him by being so blunt and he, understandably, needed a moment to readjust because he had known me for a long time already without being aware I was queer," she says. "When he comprehended what I was saying to him, he immediately was very supportive. He's been a great friend and has put me in contact with other [LGBTQ+] people in his social circles and line of work because it is one I am looking to transition to."

If you're considering if or when you should tell the guy you're dating or your boyfriend that you're queer, keep in mind that it's totally up to you and your comfort levels. There isn't a right or wrong time to share, and only do so when you feel it's right.