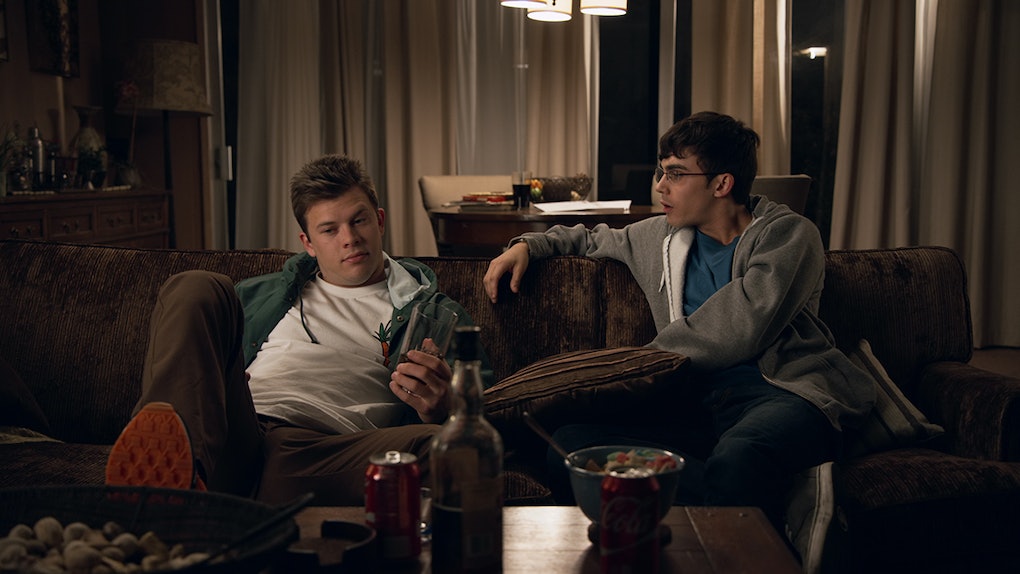 3 'American Vandal' Costumes That Are Perfect For Halloween

If you're still looking for the perfect topical pop culture costume for Halloween this year, look no further than Netflix's most recent hit show American Vandal. The true crime mockumentary put a silly, irreverent spin on the genre that's become inescapable in recent years thanks to Serial and Making a Murderer, but grew to be more than just a spoof, engrossing tons of viewers in a truly captivating mystery of its own. It's a fair bet to assume you and pretty much all your friends got hooked on the show, so why not blow them away with some creative American Vandal Halloween costumes?

Now, this can actually be a tricky task since all of the main characters in American Vandal just dress like normal teenagers, but there are some clever ways to make an otherwise normal-looking outfit really stand out and become unmistakably an American Vandal character. I've put together a few of my ideas on how to translate the d*ck-drawing doc into some knockout Halloween costumes below:

To get the look of everyone's favorite hard-boiled, high school investigator/documentarian Peter Maldonado, you really just need a couple of things. You can order a cheap pair of wire glasses frames from Amazon for $22, and pair that with a very close replica to the grey flannel shirt that Peter wears from Land's End for $50. Yeah, I know the shirt is pretty pricey, but the bright side is you can wear it again in everyday life. If you're looking for cheaper options, the shirt isn't too important — any flannel can probably work with the right props, or Peter also rocks a black hoodie much of the series. To bring the costume all together, you're going to need a bulletin board to carry around with all your theories about who drew the d*cks. Target sells a 24" x 11" cork board for $12 that works perfectly. Just print out some pics of the American Vandal characters and maybe some cars and d*cks, pin them to the board, and there ya go!

Another good Halloween option: The accused vandal of American Vandal, Dylan Maxwell. You can channel the laid-back slacker style with a zip-up grey hoodie from Kohl's for $27, and if you don't have the right hair for the look, retail site Rose Gal sells a lookalike wig for $10. To really tie the costume altogether, you might want to carry around a can of spray paint as well, which you can get for as cheap as $2.50 from Walmart. Yes, I know we don't know if Dylan actually drew the d*cks, but hey, the spray paint still works since we know he is known for his graffiti.

The third standout character from American Vandal that could make a super clever Halloween costume is Christa Carlyle, the high school's perfectionist golden student who most viewers think probably was behind the d*ck drawings all along. Thankfully, it's super easy to get your hands on one of the "Free Dylan" shirts that Christa makes, sells, and wears throughout the series — they're available on Teepublic for $20. And if you don't already have shoulder-length brown hair with blonde ombre highlights, no worries — this $25 wig from Walmart does the trick. To bring it all together, you're going to need Christa's all-important leg cast, which served as her alibi in the show. These casts can get pretty expensive online, but some go as cheaply as $40 on eBay (you can check the similar items on that post for even more options).

More like this
Who Did Emily Poison? 'The Handmaid's Tale' Season 2 Is Off To An Intense Start
By Ani Bundel
In 'Riverdale' Season 5, Toni Topaz Is The Black Superwoman Without A Cape
By Erika Hardison
The Kardashians' Messages For True's 3rd Birthday Are Full Of So Much Love
By Brandy Robidoux
Stay up to date