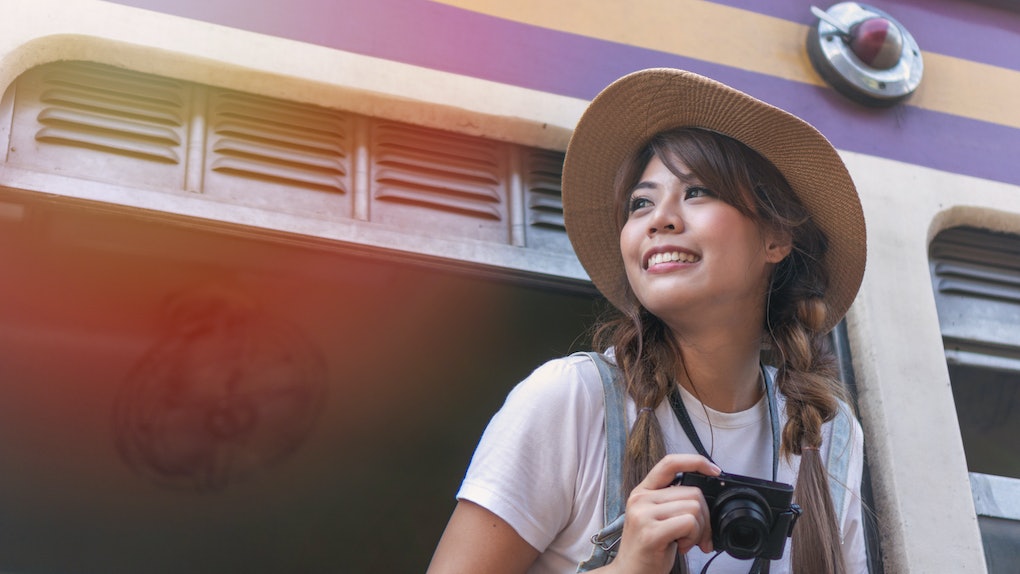 23 Captions For Train Pictures That Are Totally On Track

If you're filled with wanderlust, you know that it's not always about your final destination, but the journey of getting there that can be just as exciting. That's especially true if you're traveling via train. Planes allow you to be amongst the clouds, but trains are where you really get to take in the scenic views as you're cruising along the track. If you're lucky enough to snag a window seat, you'll want to pack some captions for train pictures as well.

When I lived in New York City, I took the train to visit my friend in Boston, and it was a magical time. Sitting by the window, I listened to songs about traveling and imagined myself being the star of a music video as I gazed outside. I loved seeing the trees whiz on by like green blurs. Honestly, I felt like Harry Potter on the Hogwarts Express. It truly was a moment made for the 'Gram.

If you're planning a cross-country train trip soon, or even just taking the train home with the skyline in the background, you'll want to keep these 25 captions handy. You never know when your very own train music video or Harry Potter moment might arise as you snap a pic in a cute outfit waiting at the station with your luggage, or getting cozy in an overnight sleeper car.

1. "Live the life that people write novels about."

2. "I'm afraid my train of thought has left the station."

3. "I love you to the moon and back, and all the way down the railroad track."

5. "Sometimes, all we need is just a new perspective."

8. "I'm on the right track to somewhere great."

9. "With a view like this, I know I'm heading in the right direction."

10. "Wishing this was the Hogwarts Express."

11. "The only way of catching a train I have ever discovered is to miss the train before." — G.K. Chesterton

12. "Sometimes, that light at the end of the tunnel is a train." — Charles Barkley

13. "If a train doesn't stop at your station, then it's not your train." — Marianne Williamson

16. "It’s a magic carpet on a rail, never takes a rest. Flying through the mountains and the snow." — Tom Hanks, The Polar Express

19. "A traveler without observation is a bird without wings." — Moslih Eddin Saadi

21. "One should always have something sensational to read in the train." — Oscar Wilde