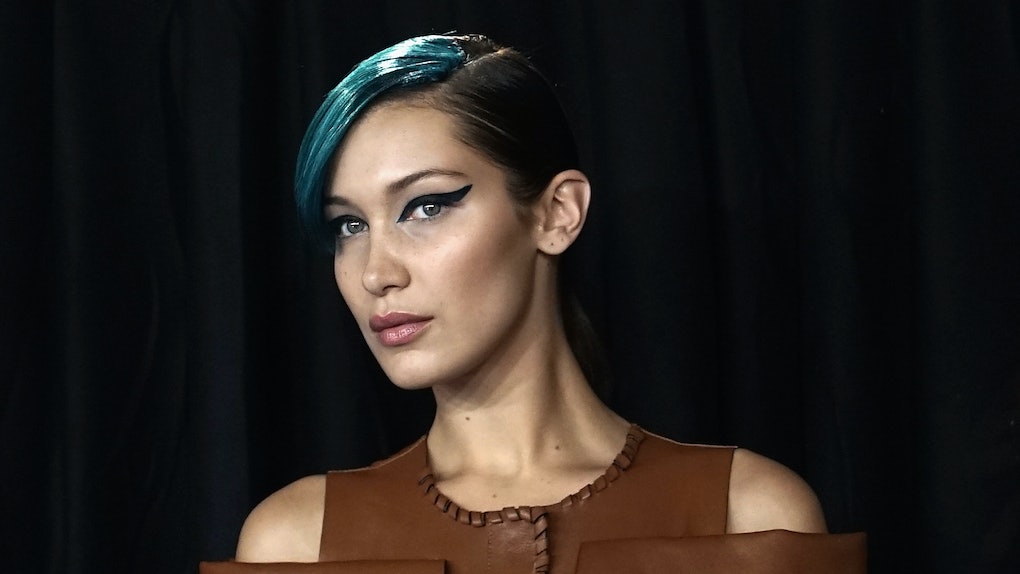 Winged liner is exceptionally powerful — whether you want to feel fierce AF or actually ward off unwanted glances from strangers. Ditto for seducing literally anyone you want. If you love a serious cat eye, then bust out your fave liquid liner because 2018 makeup trends predict that big, bold, graphic liner will be a ubiquitous trend this upcoming year. Can I get a collective yassssss?

While some designers have taken a more restrained approach, showcasing colorful liner accents under or around the lash line itself, others have shown no mercy when it comes to playing up eyes with loads of black liner. Whether the focus is dramatique or casually understated, you can bet all eyes will be pointed toward liner in 2018.

In the look for the 2018 Ulla Johnson show, models sported small dashes of white liquid liner underneath the lower lash line. The effect was a wide-eyed doe look, much different from the classic fierceness of the casual cat eye.

Whether paired with the leather and S&M-lite gear of the Moschino show, or contrasted with the pastel elegance of Herrara's clothes, the understated graphic liner gave each look a playful edge.

Jason Wu and Tom Ford's models sported big, bold, unapologetic wings. The lines were thick and the wings were more blunt than sharp. Because the wings were so intense, the skin for both shows was kept clean, bright, and naturally glowy.

TBH I think this might be the fiercest Kendall Jenner has ever looked.

Miu Miu also followed suit with bold wings along the upper lash line, but here you can see a movement from rounded shapes to sharp points. The Pat McGrath-crafted line focused mostly on the outer corner of the eye and took and immediate and drastic bold swoop upward.

Marc Jacobs really took his wings to the next level. The lines were thick and deliberate, encircling the entire expanse of the eye.

Though the models wore soft pink frilly numbers, the liner gave them a dramatic rocker flare that intensified their steely model-esque stares.

Fendi really took the 2018 graphic liner trend and ran with it. The line was thick, covering the entire expanse of the model's eyelid. The line extended all the way up toward the brow, nearly crossing the tail. There's no denying Bella Hadid looks rad AF wearing this larger-than-life look. Though liner can sometimes run the risk of making eyes look smaller, this insanely large wing actually opens up the eye and makes it look much bigger.

If you love your wings and want to amp it up for 2018, then the graphic liner trend is waiting for you. The only limit is your imagination... and the amount of ink in your liquid liner pen.