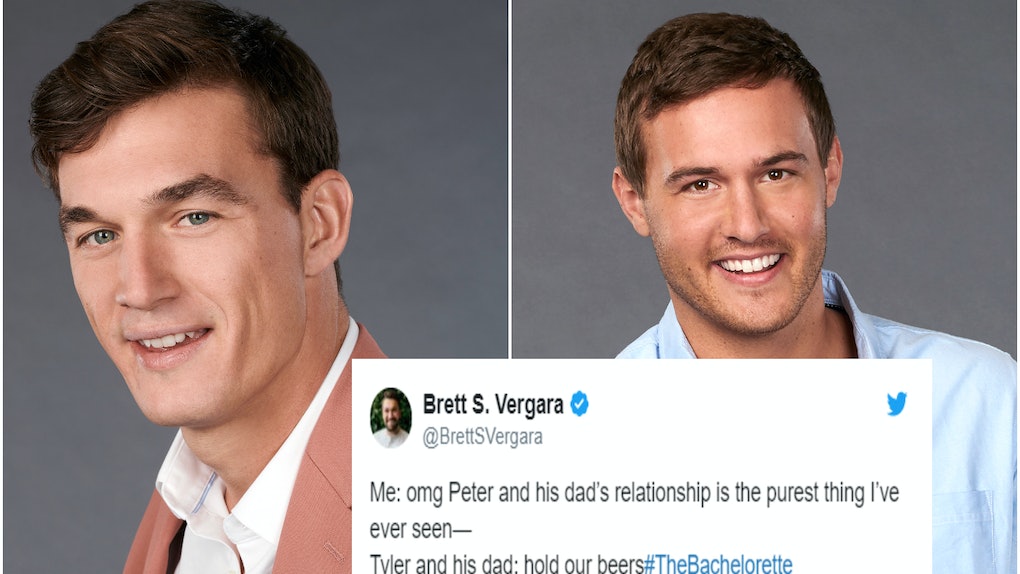 20 Tweets About Tyler & Peter's Dads That Just Won 'The Bachelorette'

Hannah Brown pulled a Bachelorette first when she decided not to eliminate any contestants after hometown dates, but if the decision were up to Bachelor Nation, it's safe to say only Peter and Tyler would have made it through a rose ceremony. The two fan-favorites solidified their places in audiences' hearts during hometown visits while Luke and Jed had uncomfortable family time that only highlighted the issues fans have with them. In addition to falling even harder for Peter and Tyler, viewers also loved both of their fathers, and tweets about Tyler and Peter's dads prove that the older men would have snagged their own roses if fans had a say.

Compared to Luke and Jed, Tyler and Peter have discussed their families frequently throughout this Bachelorette season. Everyone knew that it was essentially law in Peter's family to love flying and pursue an aviation career, while Tyler touched upon the struggles of taking care of his dad when he was recently hospitalized. Thankfully, the contestants' loving talk about home wasn't a fluke, because these families definitely turned up to impress.

During July 8's hometowns episode, Peter flew Hannah over the Bachelor mansion and his house, while Tyler took her on a boat to tour a waterside view of his hometown. Following the excursions, Peter and Tyler's families charmed Hannah with their kindness and love for their sons, and viewers were particularly drawn to the guys’ fathers. Based on Twitter reactions, a spinoff series starring these men would be an instant success.

First, in Westlake Village, California, Peter Sr. grew teary during a chat with Pilot Pete, telling him, "I only want the best for you." Over in Jupiter, Florida, Tyler was nervous about seeing his ailing dad Jeff for the first time since he left to film, warning cameras that the reunion was going to be emotional. At home, the two men had a long hug, and during their one-on-one conversation, Jeff told him they'd all behind him if a relationship with Hannah panned out. "We’d do all we can to love and support you," he told him. "I love you, and I want the best for you and Hannah."

Seeing as the episode kicked off with these emotional visits, the transition into Luke and Jed's slightly icy dates was particularly poignant. While Luke's family tried to convince Hannah his aggressive behavior was not typical and Jed's mother stared down the Bachelorette, viewers were still praising the displays of emotion from Peter Sr. and Jeff. Can these guys guest star in future seasons to give Bachelorette contestants heartfelt pep talks?

During the rose ceremony, Hannah awarded Peter and Tyler with the first two roses before deciding to keep all four men for fantasy suites. This wasn't exactly Bachelor Nation's favorite decision, but I'm definitely interpreting Peter and Tyler's early callouts as wins for their dads too. Like father, like son, right?