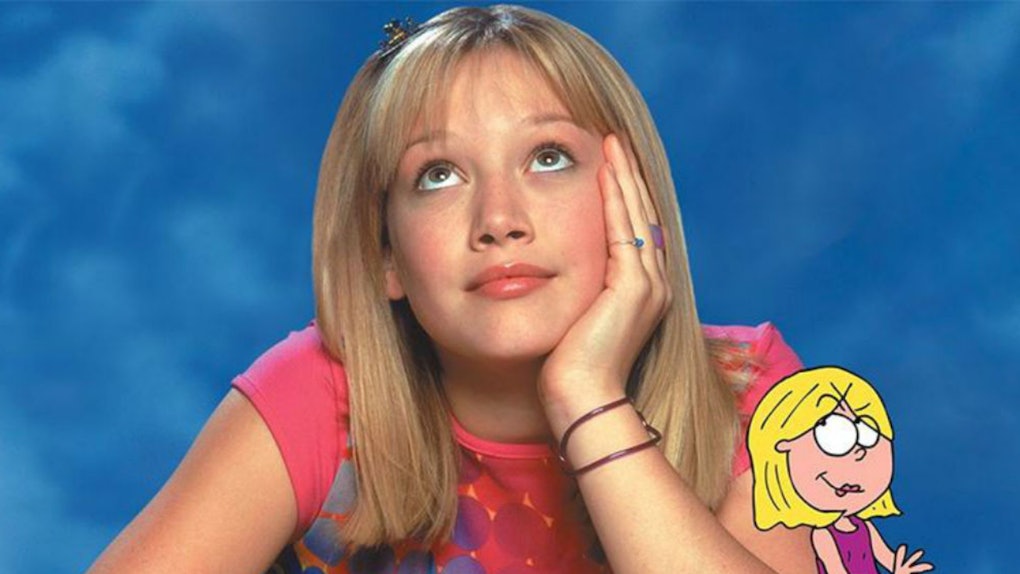 Every kid who grew up in the early 2000s had the same best friend... even if they never actually met her in person. It really is difficult to overstate the importance of Lizzie McGuire for most millennials: Hilary Duff's awkward but self-assured middle schooler provided a hugely relatable voice for basically every kid, tween, and young teen from 2001 to 2004. Now, after 15 years away, Lizzie is coming back for a revival series on Disney+, so what better time than now to look back on all of the iconic Lizzie McGuire moments that made the Disney Channel series so memorable?

Over the course of 65 episodes and one music-filled movie, Lizzie McGuire brought the mishaps and triumphs of being a teenager at the turn of the century to life. With the launch of Disney's new streaming service, Lizzie will make her comeback and provide her same relatable take on being a young adult out in the world today. The upcoming Lizzie McGuire revival series will bring back Hilary Duff to play a now-30-year-old version of Lizzie, as she navigates life in New York. To fully prepare for Lizzie's big comeback, let's go over some of the most memorable scenes in Lizzie McGuire history.

1. When Lizzie Demanded A Bra

At its best, Lizzie McGuire was a show that confronted the most awkward moments of puberty with funny, relatable moments, and nothing exemplified that more than Lizzie shouting "I want a bra!" at her mother in the middle of a store. Those four words went down as what is probably the most iconic phrase of the entire series.

Kate Sanders was the ultimate mean girl, and she knew exactly how to ruin Lizzie's life with the most cutting insults a middle schooler could imagine. The worst of all, though, came in the movie, when Kate screamed to the whole school that Lizzie McGuire was an outfit repeater. Talk about a social homicide!

Lizzie McGuire was meant to be a run-of-the-mill girl, but just like anyone else, she was not content with being "ordinary." Every fan of the show remembers Lizzie's big brush with excellence after discovering her surprising talent for rhythmic gymnastics. Although she won her big tournament, Lizzie opted to leave her ribbons behind and found joy in her normal life.

4. When Miranda Learned To Love Herself

One of the darkest episodes of Lizzie McGuire centered on Miranda depriving herself of food due to her body dysmorphia. Miranda broke down and admitted she was eating less because it was an area in her life she felt she had control over. Lizzie and Gordo were able to help her deal with the issue, and in the end, Miranda was able to fully enjoy filming Gordo's music video.

5. When Lizzie Became A Bad Girl

After a taste of the bad-girl lifestyle in detention, Lizzie went all the way with a punk makeover complete with frizzed-out hair and a (fake) nose ring. The school's resident bad girl even gave her a new name: Frizz. But after Lizzie's short foray into cutting classes and telling her parents to take a chill pill, Gordo and Miranda were able to help Frizz realize being a bad girl is more trouble than it's worth.

6. When Lizzie Became A Supermodel

Lizzie got her diva moment and then some after getting accepted into a magazine's fashion show. To get her friends to stop treating her like a celebrity, Lizzie purposefully became a rude and demanding diva to Gordo and Miranda. She finally dropped the act when they realized not to treat her any differently.

7. When Lizzie Exposed Paolo As A Fraud

If any four-word phrase were going to compete with "I want a bra!" for the most iconic Lizzie McGuire moment, then it would definitely be "Sing to me, Paolo." Technically, it was mainly Lizzie's Italian pop-star alter-ego Isabella who exposed her former singing partner as an AutoTuned fraud, but the moment led to Lizzie and Isabella belting out "What Dreams Are Made Of" on stage at the freakin' Coliseum! Not bad for a middle-school trip.

8. When Gordo Skipped The School Dance For Lizzie

Gordo and Lizzie's love story had been bubbling under the surface for the entire run of Lizzie McGuire, but he really showed how much he cared for his bestie when he came to her house to just chill with her on the night of the school dance. After an emotional moment, the duo decided to hit the dance with Miranda and just have a ball as friends.

9. When Gordo Had His Bar Mitzvah

Much of Gordo's insecurity throughout Lizzie McGuire came from him comparing himself to Ethan Craft, the popular guy that all the girls had a crush on. When his jealousy reached its peak, Gordo tried various methods to be perceived as more "manly," before ultimately deciding that having a bar mitzvah was the right way for him personally to feel like he had progressed into manhood.

This was the moment that rocked every teen's world back in the early 2000s. After sneaking onto the set of Aaron Carter's music video shoot, Lizzie just so happened to run into the pop star outside his trailer. Oh, and there was mistletoe hanging right above them, so Aaron leaned in for a kiss after uttering the words that every fan knows well: "Merry Christmas, Lizzie McGuire."

11. When Ms. Ungermeyer Was A Total Boss

The Lizzie McGuire Movie introduced a few new characters, but none was more instantly iconic than Alex Borstein's Ms. Ungermeyer. The strict, schedule-obsessed chaperone may have come off as no-nonsense at first, but in the end she managed to get everyone into Lizzie's big Coliseum performance thanks to her authority, and even got flirty with Paolo's bodyguard Sergei.

12. When Lizzie Went Out With Larry Tudgeman

Larry Tudgeman was always the outcast at Lizzie's school, but she was surprised to find that he actually cleaned up very well when he asked her out on a date. Lizzie had fun with Larry at the science museum, but of course, Kate had to ruin everything by announcing that Lizzie and Larry were boyfriend and girlfriend at school afterward. Lizzie was able to let Larry down easily, only for Larry to then quickly ask about Miranda.

Lizzie's obnoxious little brother Matt was always the mastermind of his pranks... until he began teaming up with fenemy Melina. The two began as rivals, but that contention eventually turned into a friendship, even though Melina would so often outsmart Matt and take advantage of him.

Honestly, one of the most memorable moments from the end of Lizzie McGuire was something that did not happen. Fans were dismayed that Lizzie's BFF Miranda was nowhere to be found in the final episodes of the show or in the movie. In actuality, actress Lalaine had stepped away from the show to focus on other projects, so fans never really got to see Miranda's big farewell.

You had to know this was coming! After fans shipped Gordo and Lizzie for the entirety of the Lizzie McGuire series, the two best friends finally shared a kiss on a balcony in Rome at the end of The Lizzie McGuire Movie. It was the perfect moment that every Lizzie McGuire fan had waited years for.

16. When Kate Threw The Party Of The Year

Has any middle schooler ever thrown a rager that could compare to Kate Sanders' birthday party? I think not. Kate's party had loud music, a massive crowd, cell phones as party favors, and most importantly of all, no adult supervision. The only downside is that it wasn't at all what Kate actually wanted, so in a heartfelt moment of bonding between the two enemies, Lizzie helped Kate kick all of the party animals out of her house.

17. When Lizzie Wore An Ugly Sweater For Picture Day

Picture day is always a ton of stress, and that proved to be the case for Lizzie, Gordo, and Miranda as well. At first, Lizzie was excited to channel Britney Spears' "Oops, I Did It Again" look for her photo... until her mom made her wear the gaudy red unicorn sweater her grandma gave her.

18. When Matt Started A Rock Band

Matt and Lanny are always getting up to mischievous side projects, but their most memorable was definitely when they decided to form their own rock band. The best friends even got legendary drummer Rick Marotta to join the group (if you haven't heard of him, he's a pretty big deal). Mr. and Mrs. McGuire were blown away by how good the band wound up sounding, but of course, Matt was quick to move on to his next project and left the band behind.

19. When Gordo Got A D&D Intervention

Gordo was usually the voice of reason, but even he could get carried away by frivolous distractions, like when he became obsessed with the Dungeons & Dragons-like game Dwarflord. After Gordo flunked a test because of Dwarflord, Lizzie, Miranda, and Matt had to kidnap him and make him realize his dedication to the game was hurting other aspects of his life.

20. When Lizzie Spread A Rumor About Kate

In the end, the most memorable episode of Lizzie McGuire will always be the very first one. After Lizzie spread a rumor that Kate only made the cheerleading team because she stuffed her bra, Kate retaliated by leading a cheer culminating in the whole squad calling Lizzie a loser. Thankfully, Lizzie was able to recover from the social attack, but it set up the conflict between Lizzie and Kate that would define so much of the rest of the series.

Looking back on all of these moments, it's easy to see how Lizzie really did have a totally wild middle school experience that was still very relatable deep down. Now, superfans just have to wait to see what Lizzie will be like as a 30-year-old in the new Disney+ revival series. Something tells me she's going to be just as klutzy, awkward, and ultimately inspiring as ever.

More like this
These Fake 'Riverdale' Brand Names Are Even Better Than The Real Thing
By Rachel Varina
The Best Movie Soundtracks Were So Good, They'll Live On Forever
By Brandy Robidoux
The 'Glee' Cast's Tribute To Naya Rivera At The 2021 GLAAD Media Awards Was So Moving
By Abby Monteil
Stay up to date