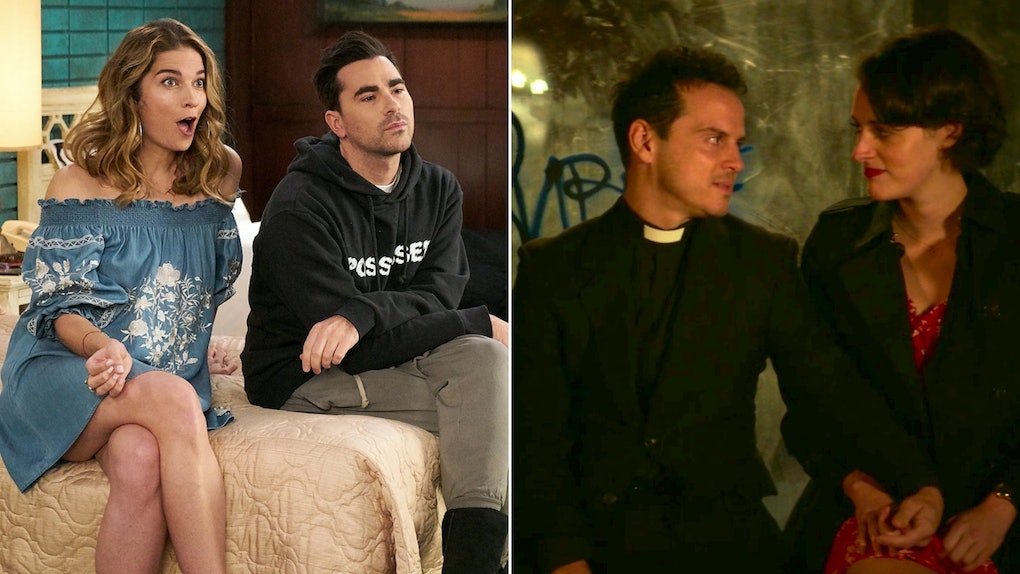 The beginning of awards season can be a really stressful time for anyone who loves pop culture. There are more incredible shows than ever that critics (and your friends) are pressuring you to watch all the time, but thankfully, this current golden age of television also makes it easier than ever to watch all of the buzziest shows. If you want to be sure you're in the know before watching the Emmy Awards on Sunday, Sept. 22, here are the 2019 Emmy-nominated shows to stream that you do not want to miss, along with where you can stream them and why you should watch.

Heading into the 71st Primetime Emmy Awards, many of the networks with the most nominees are actually streaming platforms, which makes it super easy for anyone to check out the shows that are being honored this year. Netflix boasts 117 total nominations this year, while Amazon Prime Video trails with 47 and Hulu with 20. The only network with more nominations than Netflix is HBO with 137, which has its own dedicated streaming platforms in HBO Go and HBO Now. NBC, Showtime, FX, CBS, and other nominated networks also make their shows available online through various streamers, so you should have no problem finding what you want to watch if you know where to look.

Why stream: After cleaning up at the Emmys last year with five wins in a near-sweep, The Marvelous Mrs. Maisel is poised to collect even more trophies for its second season with 20 nominations this year. The '50s-set series follows a woman who stumbles into stand-up comedy and discovers her natural talent for the art. Season 2 sees Midge Maisel expand her career in the face of sexism, family obligations, and romantic troubles.

Where to stream: HBO Now and HBO Go

Why stream: An awards-season juggernaut and inescapable pop-culture force, Game of Thrones easily secured the most nominations for the 2019 Emmys with a total of 32 noms for its eighth and final season. The show's cinematic final season is available to stream on both HBO's standalone service HBO Now and its connected service HBO Go. The cinematic final season of the fantasy epic closes out the lore-filled series with countless unexpected twists.

Why stream: With a total of 16 nominations, Netflix's breakout miniseries is poised for an exciting first Emmys. The Ava DuVernay-directed miniseries is based on the controversial case of the Central Park Five from 1989, and has won universal acclaim from critics.

Where to stream: Amazon Prime Video or BBC America's website

Why stream: Last year, audiences became totally transfixed by the complex, cat-and-mouse dynamic between investigator Eve Polastri and psychopathic assassin Villanelle, and Season 2 only made things even more twisted between the pair. The British series' second season is up for six major awards at the Emmys this year. While Season 1 is available on Hulu, Season 2 has still not been added to the streaming site yet.

Why stream: Bill Hader's strange but engrossing portrayal of an assassin with a passion for acting was a standout at the Emmys last year for its debut season, and has earned 17 nominations for the 2019 Emmys. Season 2 gets even darker, weirder, and more unexpected than ever before.

Where to stream: Hulu

Why stream: With nine nominations for this year's Emmys, NBC's time-jumping family drama has proven it is still going strong after three seasons. The most recent season delves into even more complicated developments in the Pearson family's past, present, and — for the first time ever — future.

Why stream: Game of Thrones was not the only hit HBO show to end after a long run this year. The biting political comedy Veep has been an awards magnet ever since it debuted back in 2012, and this year, it was nominated for nine awards. If Julia Louis-Dreyfus wins the Outstanding Lead Actress in a Comedy Series award this year, she will have won that award for every single season the series was on the air.

Why stream: After the show received what has probably been the most resounding critical response of any series in 2019, it should come as no surprise that the second season of Fleabag earned 11 Emmy nominations this year. The six-part season centers on a rollercoaster relationship between Phoebe Waller-Bridge's Fleabag and a conflicted priest played by Andrew Scott.

Why stream: One of the buzziest shows to premiere in 2019 was definitely Chernobyl, the HBO miniseries which dramatized the events surrounding the infamous 1986 nuclear plant disaster. With 19 nominations this year, the show is up there with Game of Thrones and Barry as HBO's most-nominated series of 2019.

Why stream: Russian Doll took Netflix subscribers on a seriously wild ride when it debuted at the start of 2019. The inventive new series perfectly combined comedy, drama, and science fiction to deliver an unforgettable story about a woman mysteriously caught in a never-ending time loop.

Why stream: Thanks to its end of 2018 release, Escape at Dannemora already made a splash last awards season with its star Patricia Arquette winning a Golden Globe, a Critics' Choice Award, and a SAG Award, but it was released too late for 2018 Emmys eligibility. Now, it is finally in the Emmys race and boasts an impressive 12 nominations. The miniseries is based on a true story about a prison guard helping two convicted murderers escape jail.

Where to stream: Hulu

Why stream: Musical theater fans rejoiced when FX announced plans to dramatize the complex relationship between dancing legends Bob Fosse and Gwen Verdon, and the resulting series Fosse/Verdon showcased a tour de force from leads Michelle Williams and Sam Rockwell. The miniseries was nominated for 17 Emmys.

Why stream: Despite quickly becoming one of network TV's most beloved comedies by both audiences and critics, The Good Place has yet to ever win an Emmy. That could all change at this year's ceremony, though. The afterlife comedy was nominated for five awards, and now that its third season is available to stream on Netflix, it's easy for everyone to catch up on the show's increasingly philosophical, metaphysical adventures.

Why stream: Unfortunately, the fourth season of Better Call Saul is not yet available to stream on Netflix like its first three seasons are, but fans can still watch it on AMC's website with a cable subscription. The most recent season of the Breaking Bad spinoff was nominated for nine Emmys this year. Although the crime drama has been highly nominated for all of its past seasons, it has yet to take home an Emmy.

Why stream: Netflix's dark money-laundering drama drew fans in with its criminal plotlines when it debuted in 2017, and its second season upped the ante even more as the Byrd family went to new lengths to stay afloat in rural Missouri.

Why stream: No series has given fans as much pure, self-serious silliness as IFC's spoof-filled anthology Documentary Now! In its third season, the series featured John Mulaney parodying Stephen Sondheim, Cate Blanchett sending up Marina Abramović, and Owen Wilson parodying the leader of the Rajneeshpuram cult, among several other celebrity guest stars. The most recent season scored five nominations for the 2019 Emmys.

Why stream: Although it aired last summer, Sharp Objects actually missed eligibility for the 2018 Emmys, so it was nominated in eight major categories this year instead. It is easy to see why the psychological thriller is a major contender at the awards show — nobody could stop talking about Amy Adams and Patricia Clarkson's twisted, unexpected performances in the gruesome miniseries.

Why stream: The lovable Canadian sitcom Schitt's Creek did not make much of a splash among mainstream audiences when it premiered on Pop TV in 2015, but ever since Netflix picked the show up, it has become one of the most popular and beloved comedies of the moment. The series had never been nominated for an Emmy before this year, but its fifth season received four noms in 2019.

Why stream: Since premiering last summer, Succession has quickly developed a devoted fanbase with fans who are hugely invested in everything going on with the Roy family. Now in its second season, the series follows the complex and often nefarious deeds of the high-powered family that owns the country's preeminent media conglomerate.

Why stream: A can't-miss for anglophiles, A Very English Scandal starred Hugh Grant as a British political leader in the '60s and '70s who goes to extreme measures to hide his past affair with another man. The miniseries combined comedy, drama, and — since it is based on the actual Jeremy Thorpe scandal of the late '70s — history.

As you can tell from this diverse list, anyone looking for a new show to watch with the Emmys stamp of approval has a ton of options. Now, fans just have to wait and see which of these shows takes home the trophies on Sunday, Sept. 22, and which ones get snubbed.

More like this
These Fake 'Riverdale' Brand Names Are Even Better Than The Real Thing
By Rachel Varina
These Movies & TV Shows Starring 'Shadow And Bone' Actors Are Far From Ravka
By Ani Bundel
What's Leaving Netflix In May 2021? Say Goodbye To Some Faves
By Ani Bundel
Stay up to date