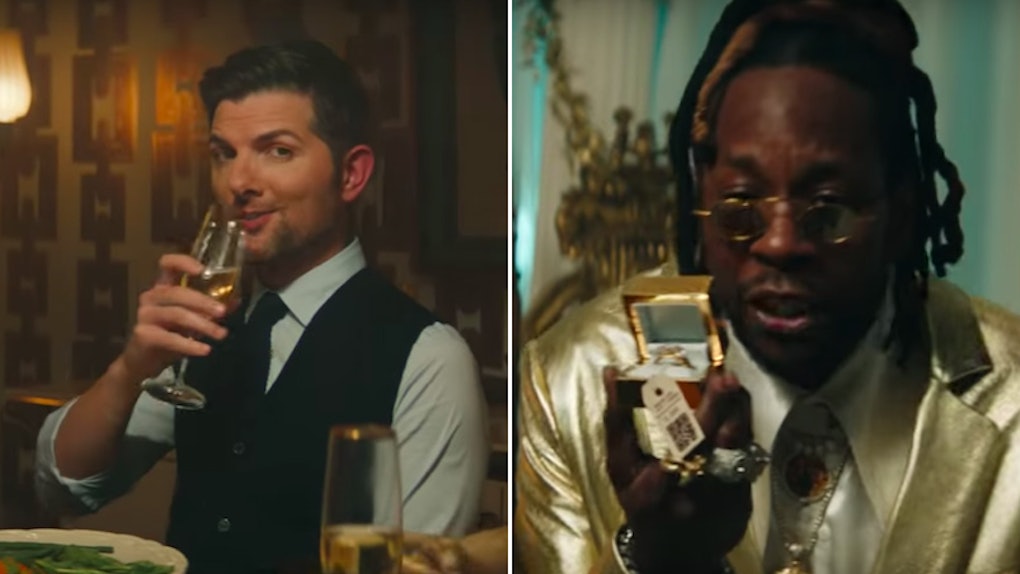 In totally normal, super regular news today, the world has come to find out that actor Adam Scott and rapper 2 Chainz have been collaborating on a music video together. (Yes, you read that correctly.) The pair teamed up to create a Super Bowl music video for an app called Expensify —which helps people and businesses automate their expense reporting — and it is something that you're *probably* not going to want to miss. Honestly, 2 Chainz and Adam Scott's "Expensify This" music video is downright hilarious, but is also hella smart and will give viewers a chance to actually win cash money. Bet you didn't see that coming, did you?

Let me paint you a picture. Imagine Adam Scott in a room, surrounded by very, very fancy things, with 2 Chainz and his posse. Scott is clearly trying to explain to the rapper how important it is to do things like save receipts so that they can expense everything as part of their work, but 2 Chainz isn't having any of it.

Why? Because Expensify, that's why.

The video — part of which will also air during Super Bowl LIII — then becomes something out of a rap video, panning the camera past things like fancy cars, a top-of-the-line wardrobe, and a man painted gold in a massage chair smoking an old receipt (still trying to figure that last one out, TBH). According to 2 Chainz, all of this is merely "a day in the life of a baller," which is something I'll never know or experience, so it's fun to live vicariously through him for a hot minute.

And about that chance to win free money: All you have to do while watching the music video is snap photos of the QR codes subtly planted throughout the video via the Expensify app, which will then enter you for a chance to win a handful of prizes.

Check out the music video/Super Bowl commercial crossover below:

C'mon. 2 Chainz proposing to himself? A fancy sculpture of the peach emoji? How can you not be entertained? I mean, this whole concept is all sorts of genius if you ask me, and to have two seemingly unrelated celebrities come together to create a video that's funny, catchy, and beneficial for people who participate is an all-around brilliant idea.

"So much creativity and collaboration went into making this video," 2 Chainz said in a press release. "It was really over the top and a lot of fun. I'm excited to be in the Expensify Super Bowl campaign and can't wait for everyone to see the spot."

Adam Scott was equally excited at the opportunity to be a part of the campaign as well. "I’ve always wanted to be in a hip-hop video and a Super Bowl commercial, so mission accomplished," Scott said in the statement about the video. "Thanks 2 Chainz and Expensify for making it happen.”

No, no, Adam. Thank you for gracing us with your presence and for killing two birds with one stone with this masterpiece.

You can watch the commercial again during the second quarter of the Super Bowl on Sunday, Feb. 3, where Expensify will have a 30-second slot, according to AdWeek. So do yourself a favor and have your cell phone in hand, ready to snap those QR codes for a chance for some serious swag. Ya welcome.

More like this
Here's Why EXO's BAEKHYUN, CHANGMO, & Raiden's "Runner" Is The Perfect T1 Theme Song – EXCLUSIVE
By Michele Mendez
Rosé From BLACKPINK's "Gone" Music Video Is The Ultimate Sad-Girl Aesthetic
By Abby Monteil
Prince Philip, The Duke of Edinburgh, Has Died At The Age Of 99
By Noelle Devoe
Stay up to date