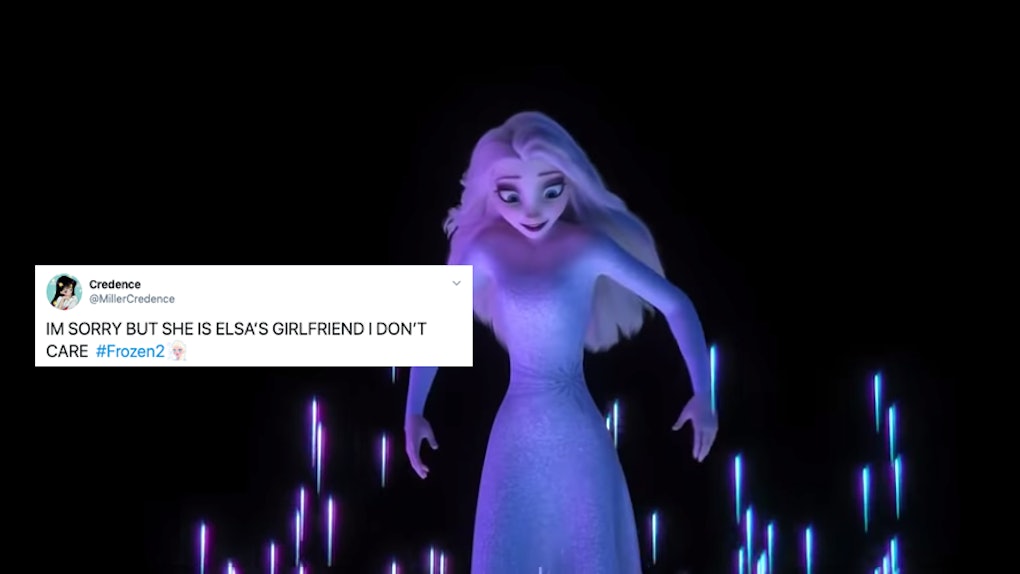 Warning: This post contains spoilers for Frozen 2. Listen, I'm not going to keep you guessing any longer: No, Elsa doesn't get a girlfriend in Frozen 2 — at least not explicitly. However, there are definitely details in the new sequel that point to the ice queen's potential membership in the LGBTQ community. Specifically, there's a new character introduced in the film, a young Northuldra woman named Honeymaren, who viewers are convinced is a love interest for Elsa. And Twitter's reaction to Elsa and Honeymaren in Frozen 2 show just how into the potential relationship fans are.

Frozen 2 answered so many important questions about Elsa — including how she got her powers and why she was hearing a voice calling out to her — but the biggest mystery about her remains an enigma. Ever since the first film premiered in 2013, fans have wondered whether Elsa would become Disney's first queer princess (or rather, queen), citing her lack of a male love interest and the possible coming-out messages in "Let It Go" as proof that she could be. Leading up to Frozen 2, though, the movie's directors revealed Elsa would again not have a love interest in the movie.

But this didn't stop audiences from going wild when the new film introduced them to Honeymaren.

Honeymaren is part of the group of indigenous people living in the enchanted forest that Elsa and her group journey into. TBH, her role doesn't seem to have much significance, which might lead one to believe she was included in the movie simply to serve as another hint at Elsa's sexuality. Though the two women didn't share any moments that were outright romantic, they did have a very cute one-on-one conversation that many people are interpreting as flirty. And, not to give away any major spoilers or anything, but the end of the movie indicates Elsa will definitely have the opportunity to spend more time with Honeymaren in the future, so there's certainly a chance for something to grow between them.

Though there has been no word about making the Frozen franchise a trilogy, many fans are already looking forward to a Frozen 3, if only so they can see how this potential love story plays out.

Fans might just have to wait and see if there's a Frozen 3 to make this potential relationship a reality. Until then — let the fan fiction commence.