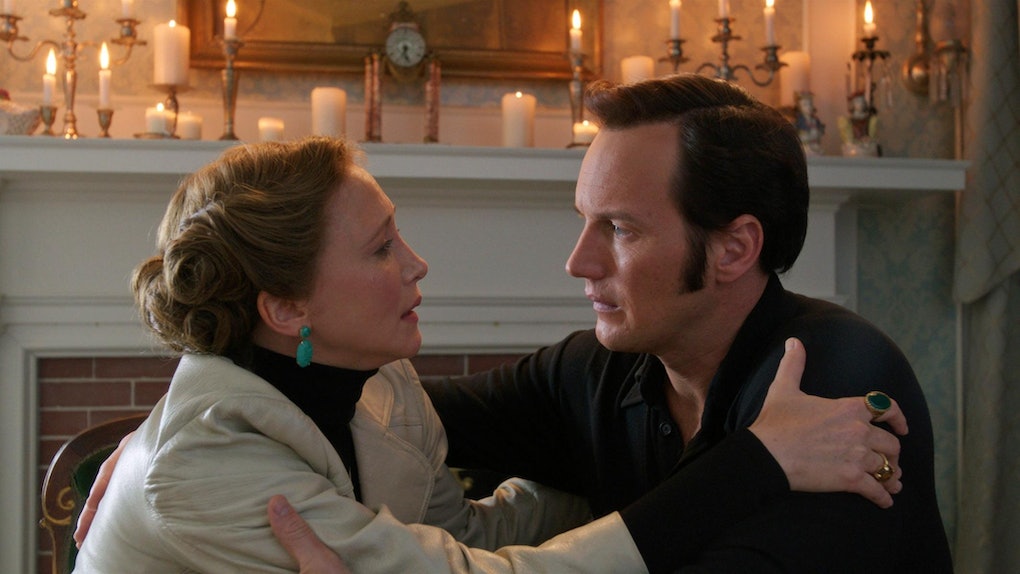 The reason fall is my favorite season isn't because of the pretty leaves, the cooling temps, or even all the fuzzy sweaters — though those all are awesome. No, it's because fall is horror movie season and I live for scary movies. I dig the visceral chill of being scared, but I love horror even more because its a genre full of amazing, complicated female heroes. No genre does a better job of exploring women's internal lives than horror — including their romantic partners (for better or worse). So, any list of scary movie boyfriends and husbands ranked is going to be based not only on their personality but also on how their behavior affects their partners.

Things I considered in compiling this list include: Did they have the final girl's back, or did they ignore all their warnings? Did they intentionally put them in danger, or maybe turn out to be a creeper in the end? And, of course, because film is a visual medium, I'll throw them a point or two for hotness. Listen, I'm a feminist, but I have eyes, OK?

So, with all that mind, which horror husband or partner came out on top? And which one is the absolute worst SO in horror cinema history? Here they are in ascending order of greatness. Also, fair warning: There will be spoilers for some of these films, so proceed with caution.

Want to know the very definition of the most garbage partner ever? Then look no further than Rosemary’s (Mia Farrow) struggling actor husband Guy (John Cassavetes) in Rosemary’s Baby, who stands by and watches his wife get drugged and sexually assaulted by the devil so that she can give birth to the antichrist — just so he can get ahead in his acting career. Yep, I think it's fair to say Guy is the worst horror movie husband in history.

12. Jack Torrance in 'The Shining'

As a writer myself, I have sympathy for Jack Torrance (Jack Nicholson) as he struggles with crushing writer's block. (Also, I totally get his love of bourbon, because... same.) But it's when he picks up an axe and starts doing the whole "chase his wife and child all over a haunted hotel" routine that he loses me — and qualifies for this spot on the list.

You first get the sense that maybe Billy (Skeet Ulrich) isn’t an all-star partner when he starts trying to pressure and guilt his girlfriend (and one of the all-time great final girls) Sidney (Neve Campbell) into having sex with him. But the final nail in the good-boyfriend coffin is when he turns out to be half of the serial killer duo offing all her friends — and also her mom a year before. Yeah, that’s what you call a real relationship killer.

Uber-d*uche Patrick Bateman (Christian Bale) belongs on a list of terrible partners just for cheating on his fiancée Evelyn (Reese Witherspoon). But when he starts, ya know, killing sex workers, he really earns his spot here. Also for getting “Hip to Be Square” stuck in my head every time I think of this movie. Not cool, man.

Think going home to meet your boyfriend's family is stressful? Well, now imagine that while you're there you’re all being hunted by a pack of mask-wearing, crossbow-toting weirdos. Yep, that’s what Erin (Sharni Varson) faces when her boyfriend Crispian (AJ Bowen) takes her home to meet the fam — and, plot twist: Turns out he was in on it the whole time.

The Fly is both one of the most tragically romantic movies in history and one of the most revolting, stomach-turning, visual nightmares set to film. What I'm saying is, it's awesome. A large part of what makes this movie so incredible is the love story at its center between scientist Seth (Jeff Goldblum) and science journalist Veronica (Geena Davis) in which the chemistry is palpable. But what puts him in the middle of the list is that he starts off amazing and turns into a monster by the end — literally. But hey, that's why we don't cross human and insect DNA, am I right?

Micah (Micah Sloat) is maybe the most frustrating boyfriend in horror history. He doesn't mean to make things worse when there’s a demon in the house hunting his girlfriend Katie (Katie Featherston), but he does — he really, really does. First by not listening to her and then by repeatedly taunting the demon. Hubris: It will get you every time.

Oh Curt (Chris Hemsworth). He doesn't do a whole lot to make him seem like an especially great or terrible boyfriend. In his defense, he does try to defend his girlfriend when they're set upon by cannibal zombies, and he does try really hard to be a hero and get them help — try being the operative word here. What I guess I’m saying is, he's a perfectly fine boyfriend, but he makes this list because he’s also visually fine. Hey, I said from the very beginning there would be hotness points.

One horror movie trope that drives me bonkers is the partner who doesn't believe the final girl when they say there's danger. This is why Josh (Patrick Wilson) gets a huge thumbs up. When his wife Renai (Rose Byrne) tells him the house is haunted and she needs out, he doesn't argue, he doesn't call her crazy, nor does he shame her. No, instead he believes her and puts that house on the market immediately. In the end, it doesn't really help since the house wasn't the problem, but hey. It's the thought that counts.

If you haven't seen this under-the-radar, woman-directed horror film, I highly recommend you address that immediately. It's one of my all-time favorite horror films, but also it's one of the most emotionally impactful, since it's all about a couple in love that starts breaking apart after a strange occurrence late one night on their honeymoon. Kind, concerned, and terrified Paul (Harry Treadaway) is everything you want in a partner when you're transforming into something... else.

Listen, you know the love is real if even a zombie apocalypse can't stop it! And yes, just because R (Nicholas Hoult) is undead, flesh-eating, and possibly rotting, doesn’t mean he can’t love! So, when he saves and then romances Julie (Teresa Palmer), you can't help but swoon a little bit. Hey, just because I love horror doesn't mean I can't be a bit of a romantic, too.

I can’t even begin to explain all the reasons I love this movie — the atmosphere, the music, the sexual politics! It's all just 10s across the board. But one of the stand-out reasons this movie is fantastic is Paul (Keir Gilchrist), the family friend with a crush on Jay (Maika Monroe). Instead of being the creeper who's upset about being in the friend zone, he respects Jay's boundaries, is a true friend and then some, and when she truly needs someone the most, he steps up even though it will likely prove fatal. So, when the film ends on what seems to be a romantic note between the two of them, it's earned and totally bittersweet.

1. Ed Warren in 'The Conjuring'

If any relationship in horror movies (or franchises, for that matter) is goals, it’s Ed (Patrick Wilson) and Lorraine Warren (Vera Farmiga) in The Conjuring series. No matter what demons, killer dolls, or ghosts are in their way, they are a team, and it's actually really beautiful. Adding to the sweetness of this relationship is that it’s actually based on a real-life couple. And yes, that room full of evil objects is real, too.

I’m not suggesting you should base your relationship dynamic on the ones in horror movies, but if you were going to... well, I’d stick with number six and above. And if you just so happen to find the Ed to your Lorraine, you might be in for a lifelong love adventure.