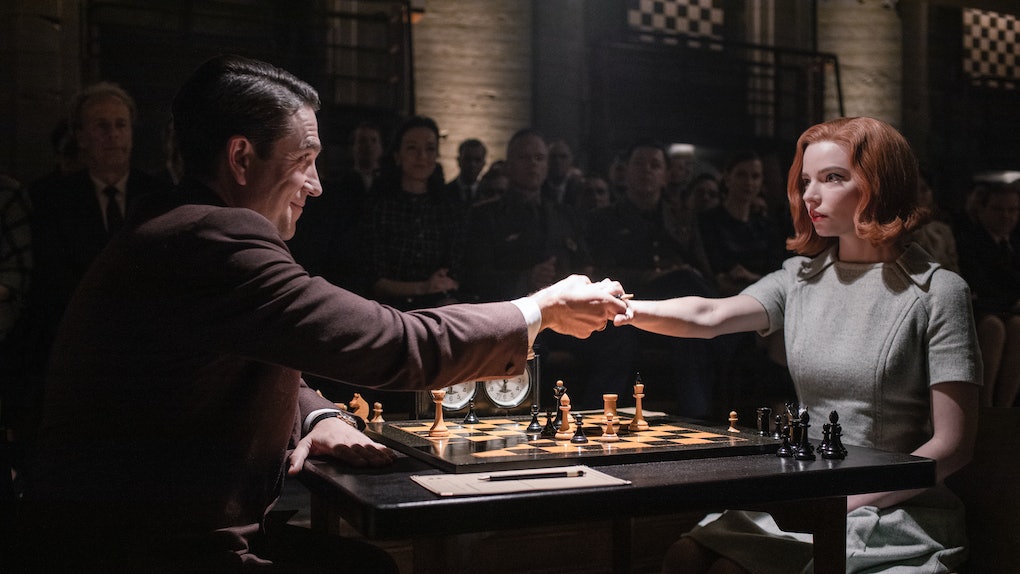 No one expected The Queen's Gambit to be a massive hit, but the series about chess prodigy Beth Harmon (Anya Taylor-Joy) during the 1950s and '60s became one of the biggest series ever in Netflix history. However, unlike most Netflix shows, The Queen's Gambit is a limited series, with no second round of episodes planned. So, what should fans do once they've finished the series? Here are 10 shows and movies like The Queen's Gambit to check out next.

Despite the subject matter, perhaps it was wrong to underestimate The Queen's Gambit, which was adapted from author Walter Tevis' book of the same name. Tevis is also the writer behind classic hits as The Hustler, The Color of Money, and The Man Who Fell To Earth. And although right now, the series does not seem likely to be renewed, things can change. Taylor-Joy seems to believe there are avenues to explore plot lines that Tevis never even imagined. For example, in an interview with Deadline, Taylor-Joy suggested letting Beth become a responsible adult and maybe even a mother. "It would be very interesting to see how Beth would be as a mother, now that she’s sober and more cognizant of the demons that pull her down," she said.

But fans do at least have one upcoming title based on The Queen's Gambit. The book has been optioned for a theater production and is now being planned as a full-fledged musical. Unfortunately, that wouldn't open for some time. So while fans await more Beth Harmon, here are a few other shows and movies to tide you over:

The Queen's Gambit showrunner Scott Frank has name-checked the film Pawn Sacrifice as his inspiration in interviews about the Netflix hit. Unlike The Queen's Gambit, it's based on a real-life chess prodigy, wunderkind Bobby Fischer (Tobey Maguire). The plots mirror each other, as the film traces Fischer's career from child prodigy to his historic win at the 1972 World Chess Championships versus USSR Grandmaster Boris Spassky (Liev Schreiber) in Reykjavík. The film is currently streaming on Amazon.

The dirty secret about The Queen's Gambit is that, at its heart, it's a sports series. For those looking for more TV shows that trace the rise of female athletes in a male-dominated world, there's no better show than the short-lived Pitch. The series starred Kylie Bunbury as Ginny Baker, the first woman to be a major league pitcher in baseball. It only lasted one season on Fox, but it was pretty perfect while it was on. Fans can stream the whole season on Hulu.

For those looking for a nonfiction story of a female chess icon, Queen of Katwe is here for you. The 2016 film is a biopic of Ugandan chess player Phiona Mutesi (Madina Nalwanga). A prodigy who grew up in Kampala, Mutesi went on to compete at the World Chess Olympiads and currently holds the title of Woman Candidate Master. The movie also stars David Oyelowo and Lupita Nyong'o. It is currently streaming on Disney+.

One of the most compelling aspects of The Queen's Gambit is the precise period setting (and fashion) of the 1950s and '60s. For a series that features that era (and costume and set designs to die for), there's Mad Men. The series is held up as one of the gold standards for prestige TV of this era, and for good reason. Although it may tell you it's a story about Don Draper, the real stars are the women participating in a revolution all around him. All seven seasons are available on Amazon’s IMDb TV.

If it's more Anya Taylor-Joy in a period piece you're after, the best place to start is with The Miniaturist. The BBC series, which aired on PBS at the end of 2018, stars Taylor-Joy as Nella Brandt, a young bride living in 17th-century Amsterdam. Though her life seems to be on the verge of idyllic, her new husband's household holds dark secrets — secrets someone is trying to tell her via the miniatures that mysteriously arrive in the mail. Like The Queen's Gambit, it's a fictional story based on a novel, and Taylor-Joy is once again riveting. The series is currently streaming via PBS Passport.

For those looking to meet real chess prodigies, Brooklyn Castle is an excellent documentary film on the subject. It follows five students from an inner-city public school in Brooklyn who become the most decorated junior high school chess team in the U.S. They then become the first middle-school team to win the United States Chess Federation's national high school championship. The 2012 film is available to stream on Sundance Now.

Before turning his attention to The Queen's Gambit, Scott Frank worked on Godless. The seven-episode period piece Western focused on the real-life town of La Belle, New Mexico, which was run solely by women after a mining accident killed the majority of the male population. It too stars Thomas Brodie-Sangster in a cowboy hat, alongside Michelle Dockery, Merritt Wever, and Jeff Daniels as Frank Griffin, the outlaw terrorizing the town. The series is currently streaming on Netflix.

Another 1960s era piece in the vein of Mad Men, The Right Stuff is based on the book (and movie) featuring the real-life story of the Mercury 7. It's a gorgeous love letter to the end of the 1950s and beginnings of the U.S. space program. Though it mainly features male characters, there's a lot of exploration of toxic masculinity and how sexism hurts both men and women in the race to the moon. The eight-episode series is dropping episodes on Disney+ with the finale to come on Nov. 20.

Yet another period piece featuring Taylor-Joy, Peaky Blinders is populated by a rolling ensemble cast, telling a decades-long story of the Shelby crime family in Birmingham between the first and second World Wars. Taylor-Joy joins the series in Season 5 as long-running character Michael Gray's (Finn Cole) new American wife. All five seasons of Peaky Blinders are currently streaming on Netflix.

Perhaps the ultimate chess film ever made, 1993's Searching For Bobby Fischer is about the life of chess player Joshua Waitzkin (Max Pomeranc). When Waitzkin's family realizes they have a prodigy on their hands, they hire chess coach Bruce Pandolfini (Ben Kingsley), who is determined to turn the boy into the next Bobby Fischer. The movie is available to stream for free via Amazon's IMDb TV.

Bonus connection: The real-life Pandolfini worked as a consultant on The Queen's Gambit, helping design several of the show's matches and coached the actors through them.

This article was originally published on November 7, 2020

More like this
10 Rainy Day Movies To Watch On Netflix That Are Perfect To Pass The Time
By Kristen Perrone and Lexi Williams
Is Netflix Making A 'To All The Boys' Spinoff Series About Kitty? Here's The Tea
By Rachel Varina
These Fake 'Riverdale' Brand Names Are Even Better Than The Real Thing
By Rachel Varina
Stay up to date