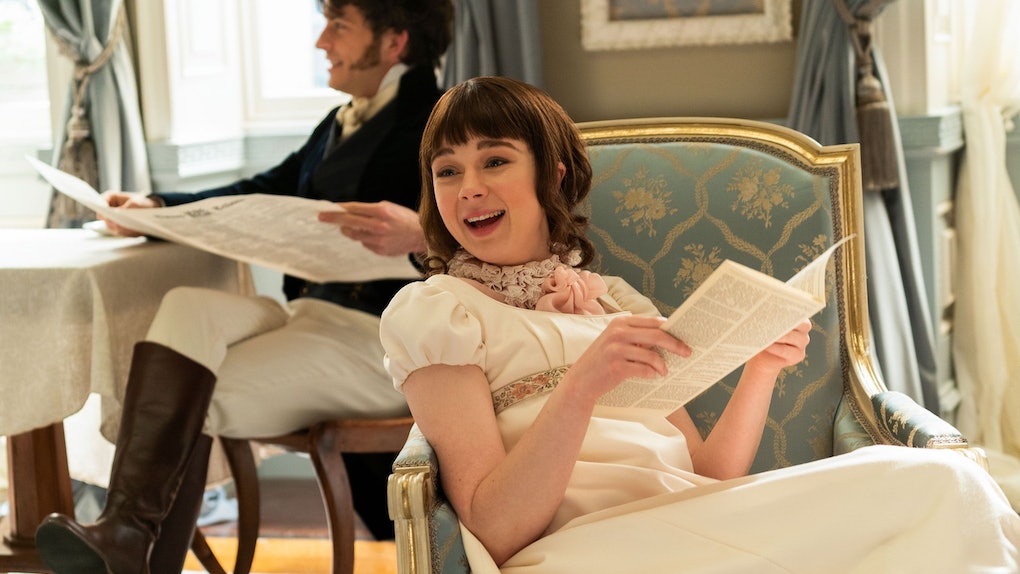 10 Sexy Regency Romance Novels To Read If You Loved 'Bridgerton'

If Season 1 of Bridgerton left you burning for more, then the wait between seasons is going to be a long one. Fortunately, the series is based on a set of Regency romance novels, so you don't have to wait for Netflix to take you on another steamy journey — you can just buy the next book if you're dying to know what's next.

Each book of the Bridgerton series by Julia Quinn is based on a Bridgerton sibling's story of love and lust, and if you'll recall, there are a lot of siblings (eight of them!). Thankfully, the books are just as addictive as the show, and you're likely to find yourself marathoning them faster than you can say, "Flawless, my dear." Even better news? The Bridgerton series is far from the only series of its kind — there are plenty of super-sexy, romantic stories set in the same time period that are sure to get your bosom heaving.

They also come in all shapes and sizes, so if you're looking for a little mystery (or even magic) in your story, you have options. Queer folks looking to see their stories reflected also have novels to choose from. Variety — we love to see it!

If you're on the hunt for a sultry historical romance, here are some options to help get your pulse pounding and those pages turning.

1. "The Lady’s Guide to Celestial Mechanics" by Olivia Waite

If the Bridgertons were a little too straight for your style, then Waite’s tale is what romantic fantasies are all about. The Lady's Guide to Celestial Mechanics follows Lucy Muchelney, a budding astronomer nursing a broken heart after her lover weds a man in a sham marriage. But soon enough, she finds herself embroiled in a new romantic entanglement with a countess who employs her to translate an astronomy text. Bodice ripping and science? Talk about thermodynamic stuff.

In Rebel (Women Who Dare), Valenda Lacy has come to New Orleans in the aftermath of the Civil War to help newly emancipated people survive and thrive in their new lives. This makes her a target of those who would thwart her work. Enter Captain Drake LeVec, an architect from a local family who shares Valenda's passion for rebuilding his city — and also for her.

3. "Nine Rules to Break When Romancing a Rake" by Sarah Maclean

For a heroine with a modern mindset, read no further than Nine Rules to Break When Romancing a Rake. In this steamy story, 28-year-old Lady Calpurnia is considered past her husband-hunting years. With that behind her, she's now free to follow her own set of rules and have some fun. She wants to drink, smoke, gamble, and do it all with the bad boy rake Gabriel St. John, the Marquess of Ralston. I think you can guess what happens next.

4. "Seducing an Angel" by Mary Balogh

Sexy and scandalous, Seducing an Angel by Mary Balogh follows Stephen Huxtable, a man who puts his family's reputation on the line when he falls for the widow Cassandra Belmont. While the attraction is mutual, there's one little problem: Cassandra has been accused of murdering her husband. But the heart (and the body) wants what it wants.

Regency courting gets a polyamorous twist in She Whom I Love by Tess Bowery. Marguerite Ceniza is an actress who has a secret desire for her dear friend, a ladies maid named Sophie Armand, who secretly shares Marguerite's feelings. This is complicated by a third party, a handsome male suitor who is secretly pursuing both women. Rather than choosing between them, perhaps the best option is for them to elect for all of the above.

6. "Half a Soul" by Olivia Atwater

Regency romance meets urban fantasy in Half a Soul by Olivia Atwater. Theodora has been missing the other half of her soul ever since she was cursed by a faerie. This has left her unable to understand feelings like fear or happiness and, as a result, it seems like scandal waits around every corner. However, things begin to change when she starts spending time with Lord Elias Wilder. He wants to help her with her condition — and just so happens to be the least-liked man in high society. But as the two grow closer, Theodora begins to suspect the thing missing from her life wasn't half her soul after all.

When Dr. Viveca Lancaster arrives in the small community of Grayson Grove, Michigan, she intends to set up her practice — only to face off with the town's headstrong mayor, Nate Grayson, who is shocked to discover that she's a woman. But Viveca doesn't back down and, over time, the good doctor heals Graysons’ heart... right before she steals it. Vivid by Beverly Jenkins is a must-read.

8. "Wicked and the Wallflower: The Bareknuckle Bastards Book I" by Sarah McClean

Looking for a little more edge in a romance novel? Wicked and the Wallflower, with all its intrigue and shady characters, just might be what you've been craving. The book follows a crime lord named Devil, the illegitimate son of a duke, who sees Felicity — an older, shy woman — as a tool to exact his revenge. For her part, Felicity sees Devil as a way to put an end to rumors threatening her reputation. While their agreement might have started with their gains in mind, unexpected romance has a way of showing up where you least expect it.

There is nothing prim and proper about lady’s maid Molly Wilkins’ past, but she's determined to put all her cheating and thieving behind her... until she falls for her employer's companion, Alice Stapleton. Molly isn't the only one who's feeling the chemistry — Alice is finding herself becoming increasingly fascinated with the lovely lady’s maid, and she's determined to learn about Molly’s past. When that past comes knocking, the two join forces and get into a little bit of mischief — and a whole lot of romance. Read A Little Light Mischief ASAP.

10. "A Lady’s Guide to Mischief and Mayhem" by Manda Collins

While the Bridgerton series had plenty of romance and intrigue, it was missing one thing: murder. A Lady’s Guide to Mischief and Mayhem is plenty sexy and romantic, but it's also a mysterious page-turner. Lady Katherine Bascomb is a newspaper columnist whose recent story leads to the arrest of a killer. When this causes a scandal, she heads to the country to get away from it all, only to find herself wrapped up in another murder mystery. That's not all she's wrapped up in: There's also the handsome Detective Inspector, who's none too happy about her meddling, even if he can't help but be hopelessly attracted to her.