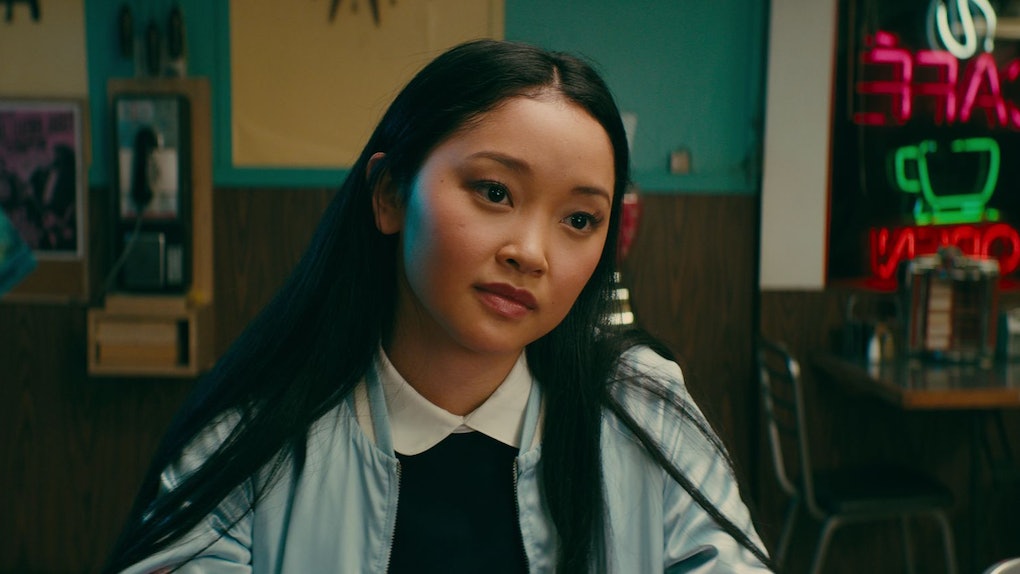 The Netflix rom-com To All the Boys I've Loved Before has inspired plenty of crushes on Peter Kavinsky and slightly bittersweet reminiscing about our own high school selves. Most of us probably didn't have a Peter smiling sweetly at us in high school, but that won't stop me from living vicariously through Lara Jean and Peter. In case you can't get enough of this love story, we've tracked down secrets about To All the Boys I've Loved Before that even hardcore fans may have missed.

Based on the first book of Jenny Han's bestselling trilogy, To All the Boys I've Loved Before follows 16-year-old Lara Jean Song Covey (Lana Condor) as she realizes that the love letters she wrote to her crushes and never meant to send out have ended up in the hands of these specific boys. When the boy next door (and her sister's ex-boyfriend) wants to discuss her letter with her, Lara Jean strikes up a deal with fellow letter recipient Peter Kavinsky (Noah Centineo) to fake a relationship with each other and veer her neighbor Josh off her tracks. Things get complicated when Lara Jean begins to fall for Peter, a popular jock wanting to make his ex-girlfriend jealous about him and Lara Jean.

With talks of a sequel flooding the internet, To All the Boys I've Loved Before has been an overnight sensation for Netflix. Seeing as we're still waiting for confirmation of a follow-up film, what behind-the-scenes gossip can we dig up until we get more of Lara Jean and Peter onscreen?

Peter Kavinsky himself as the subpar Josh? It feels blasphemous to even imagine it, but Centineo could've been the face of Margot Covey's ex instead of Israel Broussard. Speaking to IndieWire, director Susan Johnson explained that Centineo ultimately fit better with Condor, saying:

When we did chemistry reads, I knew I loved Israel and I knew I loved Noah, but I wasn’t sure who would play which role. I initially was thinking of Noah for Josh, because I thought, ‘Oh, he seems like boy next door,’ but then once I saw Lana and Noah’s chemistry I knew we had to go that direction. Israel was great with Janel [Parrish, who played Margot]. I thought that fit really well.

It's safe to say that things definitely picked up for Centineo after Condor rejected his offer of going over lines together before their auditions.

Part of the appeal of the film is Lara Jean's enviable style and dream teenage bedroom, and we have Han to thank for such precise and gorgeous visuals. On Twitter, the author revealed that providing the producers and director with inspiration boards of Lara Jean's style was crucial for the movie's realism. She wrote:

I wanted them to understand that even though To All the Boys I've Loved Before is a contemporary realistic story and not Harry Potter or Hunger Games, her style is crucial to understanding the character. In my notes, I wrote, 'It might not be what a teenaged guy would find sexy, but it’s what she feels pretty in, and for an introverted girl, it’s a way for her to express herself.'

According to Han, Lara Jean's personal style evokes memories of the 1960s and '90s, as well as Asian street style. While envisioning her bedroom, Han studied the visuals of undeniably feminine rooms in pop culture and even fused memories of her own teen bedroom into the inspiration.

Originally shared by author Jenny Han on Instagram in 2017, the adorable photo of Lara Jean and Peter cuddling on the couch that the heroine uses for her phone lock screen wasn't actually staged. Despite fans' initial thoughts that the photo came from a cut scene, Johnson revealed to Entertainment Tonight that a crew member snapped the pic of Condor and Centineo snuggling in the set's green room. Fingers crossed that these two's real-life friendship inspires Lara Jean to make a photo collage of real-life pics in a potential sequel.

4. Han Makes A Cameo As A Teacher At The Homecoming Dance

In the flashback explaining Lara Jean's crush on Lucas, the two dance together while their peers gather nearby and encourage them. In the background of the scene, you can catch a woman in the background bobbing her head along to the students' jamming. That's Han playing the part of a dance chaperone. Seeing as authors usually shy away from bigger roles in film adaptations of their works, she looks pretty content to just chill in the back while her characters come to life in front of her. Isn't that the dream for all writers?

From saving the popcorn before his pillow fight with Kitty to spinning Lara Jean with his hand in her back pocket, Peter Kavinsky quickly solidified himself as everyone's dream high school boyfriend. It turns out that Centineo is responsible for these beloved actions — one of the official Netflix Twitter accounts spilled that he improvised the popcorn save as they were filming, while he practiced the suave spin in rehearsal. Director Johnson told ET that after seeing him turn on his flirt with the move, she was inspired to change around the original back pocket shot of Peter and Lara Jean.

6. Condor and Centineo Bonded During Filming By Doing Hot Yoga Together

Well, this is definitely a first when it comes to cast bonding. Although they seem to have had chemistry from the start, Condor revealed in an interview with Decider that going to yoga with Centineo helped them capture the characters' love for each other, saying:

Very early on in the stages of production, we went to yoga together. It was hot yoga and I feel like that maybe was the moment where we became friends outside of work as well. You know, doing yoga with a person is kind of intimate so I think doing that [at the beginning of] shooting, really helped us connect and feel comfortable around each other. It’s like a weird ‘Hi, nice to meet you’ icebreaker but it was very attractive and I love that memory because it’s just so fun.

7. The Actresses Playing The Covey Sisters Had Sushi Dates

Anyone with sisters loved Lara Jean's relationship with big sister Margot and Kitty, the baby of the family. Just as having a believable bond with Centino was important, Condor also valued having strong real-life connections with Janel Parrish and Anna Cathcart, who played Lara Jean's sisters. Speaking to Decider, Condor said:

Very early on, Anna, Janel and I had sushi dates and we hung out in my apartment... Janel was literally right across the hall from me so I would go there and hang out and we would just talk. We all had a really awesome relationship outside of work as well and I think that’s why it’s really convincing. You can tell that we all just really, really get along and love each other because we made the effort to connect outside and hang out all the time.

Let's incorporate these sushi dates into a sequel, OK, Netflix?

8. Condor Hadn't Seen 'Sex and the City' Or Onscreen Dad John Corbett's Role In It

Our stanning of Centineo could have played out for someone totally different. According to his red carpet interview at the the movie's premiere, Jordan Bruchett, who appeared in the film's credits scene as Lara Jean's grown Model U.N. crush John Ambrose, was almost cast as Peter. Bruchett's appearance in To All the Boys I've Loved Before was fleeting, but he revealed at the premiere that he loves the second book of Han's trilogy, P.S. I Still Love You, in which John Ambrose plays a major role. Keep an eye on him if a sequel is announced!

10. The Hot Tub Scene Was Filmed In 95-Degree Weather

Lara Jean and Peter's infamous hot tub scene deserves its spot among cinematic legends like Bender's victorious fist pump at the end of The Breakfast Club and Jack and Rose's Titanic pose at the edge of the ship. While it may have looked like a winter wonderland, director Susan Johnson revealed at the premiere that the scene was filmed on a boiling hot day during summer. Snow had to be brought in for the picturesque moment and the steam from the tub is dry ice. Oh, well, that doesn't make the scene any less magical.

If a sequel isn't in the cards, I think fans are totally content to just play To All the Boys I've Loved Before on a loop and enjoy its movie magic. Time to look out for more off-camera secrets!

More like this
10 Quotes From Netflix's 'Enola Holmes' That Are So Freaking Relevant
By Rachel Varina
Kristen Wiig Is Making A Musical About Cinderella's Evil Stepsisters For Disney
By Dylan Kickham
17 Tweets About Simu Liu In The 'Shang-Chi' Teaser, From Proud 'Kim's Convenience' Fans
By Dylan Kickham
Stay up to date