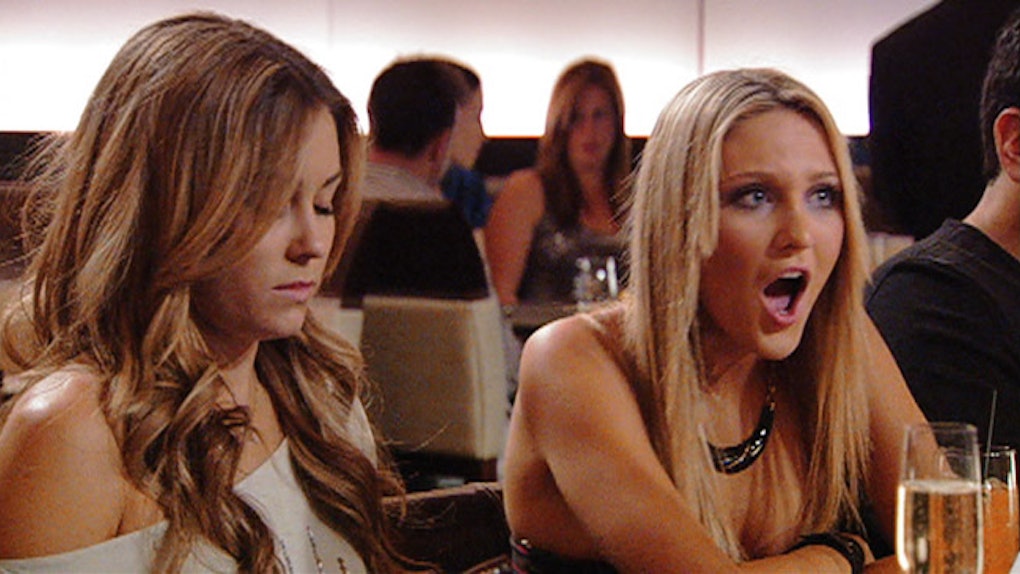 Eight years after it wrapped on MTV, The Hills is officially returning for a revival series, The Hills: New Beginnings. Other than the heartbreaking absence of Lauren Conrad, who inspired all of our fashion mogul aspirations at an early age, most of the original blonde-haired, effortlessly chic gang are due back for presumably more than just nights at the club and the dissection of boy drama. Seeing Heidi and Spencer Pratt run Instagram photoshoots of their son is bound to be legendary, but nothing can compare to the most iconic moments from The Hills.

Little else warms my nostalgia-craving heart more than revisiting some of the moments that made The Hills the prime guilty pleasure series. Whether the cast's monotone conversations and enviable parties intrigued you or turned you off, certain Hills scenes were so monumental in pop culture that everyone knew about them in an age of very limited social media. The new series will likely come with meta talk of social media influencers and Instagram ads (and Kyle Massey?), but nothing beats these important scenes from The Hills' first run.

Before the revival hits MTV, play some Natasha Bedingfield on a loop and refresh your memory of these 10 moments from The Hills that are worth remembering.

In Season 5, Lauren was officially exiting the series to pursue her fashion ambitions more seriously, and her former Laguna Beach: The Real Orange County castmate Kristin Cavallari was hired to replace her as the show's narrator. Lauren's departure and Kristin's arrival coincided at the Pratts' 2009 wedding, where they donned similar dresses in the same shade of blue (gasp!). In this episode, Lauren also called a truce with her former BFF Heidi Montag before the ceremony, but as soon the wedding was over, she left in a memorable montage that screams of The Devil Wears Prada ending.

Looking back, the series probably should have ended here, and the episode's final moments definitely beckon to that idea. Heidi sadly watches Lauren leave before turning her attention back to her new husband, the exact person who caused irreversible rife between the two women. Meanwhile, in her getaway car, Lauren's melancholy expression turns hopeful. This is the stuff of TV legends.

2. Lauren Ends Her Friendship With Heidi

Before there was a wedding, there was drama. Heidi and Lauren's feud culminated in this intense friend breakup in Season 3, after Heidi believed that Lauren's rumored sex tape was real and Spencer seemingly fueled the spreading of these lies. In 2015, Spencer confessed to lying about the tape, but before this overdue resolution, Lauren lashed out at Heidi in another unforgettable scene, telling her, "You know what you did!"

The season-long tension finally culminated with this conversation, in which Lauren reminded us that nobody should have a place for toxic friends in their lives.

We all know a Justin Bobby. The elusive bad boy who always found a way to irritate fans, Justin Bobby Brescia was reportedly reluctant to film The Hills with Audrina Patridge at the beginning of the series. Their on-and-off relationship was a recurring theme, and although Justin Bobby revealed he and Audrina reconnected following her 2017 divorce, nothing beats Lauren comforting a heartbroken Audrina by stating the obvious: "Homeboy wore combat boots to the beach. I know you don't want to call that your boyfriend."

Get that on a cross-stitch ASAP!

LC revealed in 2013 that her infamous mascara tear was put into slow-mo for the show's airing and told another outlet that the tear was probably from her eyeliner, but that doesn't hinder my envy of this makeup win. If you have to cry while wearing makeup, hope that your tear-stained face looks as glamorous as Lauren's here. Her emotion came during a conversation with Audrina about the brunette moving out of Lauren and Lo Bosworth's guesthouse and seemingly growing apart from Lauren. As with Heidi, Audrina's decision marked a major shift in Lauren's friendships and the overall dynamic of the show.

5. Heidi Debuts The Results of Her Plastic Surgery

More than a few fans definitely checked out of The Hills once Lauren left, but Heidi's drastic plastic surgery inevitably drew them back in. Several moments seen on the show leaked over into tabloids as they played out IRL, and Heidi's mindblowing transformation was one of them. Some of her physical changes included breast implants and a nose job, and in 2016, Heidi revisited the difficult transition, telling ET:

It was the hardest time of my life and I feel like I’ve become a lot stronger from it. And [it] made me look at myself and reflect, ‘Why did I do that?’ Maybe I needed to have more confidence and be more secure in who I was and not thinking so much about my eyebrows or my this or that.

6. Lauren Says What We Were All Feeling About Spencer

If GIFs existed in 2007, Lauren's declaration that Spencer is a "sucky person" would've been every teen girl's image of choice when her friend was heartsick thanks to a not-so-great guy. Far too many of The Hills' most memorable moments trace back to Lauren and Heidi's arguments, but Lauren's one-liners are still scarily relevant for every millennial woman. MTV, you sure someone can't just FaceTime Lauren for kicks on the revival? We miss her wisdom.

Yeaaaah, audiences would definitely rage about this decision today. If there's anything that Carrie Bradshaw (inarguably an older generation's Lauren Conrad, right?) taught us, it's that the opportunity to go to Paris always comes along at a pivotal moment in one's life. Torn between spending the summer in Paris with Teen Vogue or staying home with her high school boyfriend Jason Wahler, Lauren chose the guy, allowing fellow Teen Vogue intern Whitney Port to take her place in Paris. The couple soon broke up, immediately making Lauren's decision seem even sillier. She eventually did go to Paris, but Hills fans are still screaming about this relationship today.

All these years later and I'm still so confused about the being that is Spencer Pratt. Although he and Heidi seem to have chilled out now that they're parents, Spencer's time on The Hills was a chronicle of his many attempts at attaining widespread fame. His behavior grew even more erratic towards the end of the series when he turned to healing crystals for... inner peace, I guess? He and Heidi had their fair share of post-Hills reality show appearances, so it's no surprise that we'll see more of them on New Beginnings.

9. Whitney Falls On National Television In An Oscar Gown

In case you're not a hardcore fashionista and were wondering where America's Next Top Model plucked judge André Leon Talley from when it revamped its panel of industry experts, here's your answer. He was Vogue's editor-at-large back in the day and Whitney worked with him for a Good Morning America segment when she was a Teen Vogue intern. Like everything on this show, there's questionable truth behind the specifics of Whitney's internship, but MTV definitely couldn't script her taking a tumble in Hilary Swank's Oscar gown on live national TV.

10. The Show Drops A Finale Bombshell About Its Validity

It doesn't look like the original series finale ending is on YouTube, but unlike the sunny, heartfelt final moments seen in this alternate ending that aired in 2013, the actual ending of The Hills left fans completely shook. Producers nudging cast members with conversation starters was always a bit of a given, but when Brody Jenner and Kristin were revealed to be on a studio lot rather than a Hollywood street at the end of the finale, the fourth wall completely shattered. What was fake on The Hills? Was anything ever real? What are we supposed to think? In a time when reality TV wasn't analyzed for producers' interferences as it is today, this decision from the Hills team was groundbreaking.

Here's hoping that we get some clarity about that finale and what the cast has been up to since then on the revival series. The Hills: New Beginnings premieres in 2019 on MTV.

More like this
'Grey's Anatomy' Quotes That Will Heal Your Broken Heart
By Alexis DeCarvalho and Lexi Williams
Ellen Pompeo's Response To Jesse Williams Leaving 'Grey's Anatomy' Is Emotional
By Cianna Garrison
The 'Cruel Summer' Season 1, Episode 6 Promo Will Make You Question Jeanette
By Rachel Varina
Stay up to date