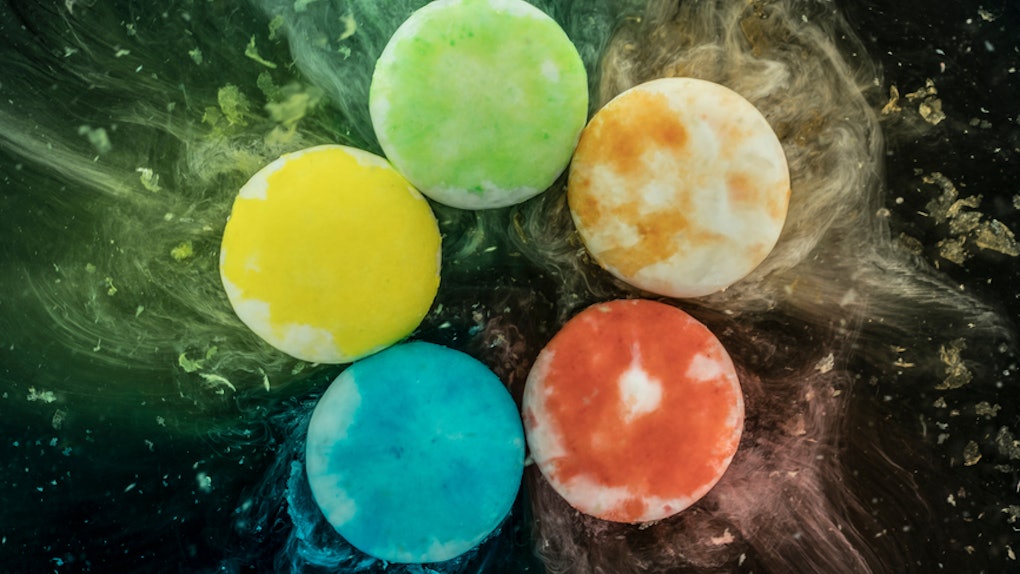 I am a big believer in the idea that there are few things in this world that can solve a problem more quickly than a helping of some really, really delicious food. And when Mercury is in retrograde, problems pop up left and right in just about every facet of life: communication, technology, travel, work, and, well, I'm not sure what's left after that. My favorite snacks have always proven to be loyal companions when I need them most, but I'm particularly on the hunt now for foods to eat during Mercury Retrograde so I can (hopefully) make it out in one piece..

Regardless of whether you truly believe in Mercury's influence over you, everyone can relate to the need for relief from the many stresses of life, and the power of a mouth-watering snack to get the job done. Food is one of those rare, universal things in this life that always has the ability to bring people together, even if they disagree on literally everything aside from how bangin' that pot roast looks at the center of the dinner table.

And for those of you who do wake up in a cold sweat each day, wondering what new, fresh hell Mercury's time retrograde has in store for you, show that sh*t-starting planet who's boss by taking control and treating yourself to any (or all) of these 10 foods that are proven to keep you calm amidst the chaos.

When Mercury retrograde stresses you out, your muscles might tense up without you even consciously realizing it. Eating bananas is a great way to release that tension, as the fruit is loaded with both potassium and magnesium, which can help to physically relax the muscles in your body.

Pro tip: Eat a banana in the evening before you go to bed, since Mercury retrograde is said to f*ck up your sleep patterns, and this yellow fruit helps produce snooze-inducing neurotransmitters in the brain, according to Forbes.

So, you know how Mercury retrograde screws with communication? Well, who's to say that that excludes communication within your own body? Yeah, I just got chills, too.

A lot of times, when stress affects your mind, it can indirectly mess with your stomach, too. Essentially, the brain communicates signals to your gut, so the stress that started in your mind finds its way into other parts of the body. Try eating some yogurt for breakfast until Mercury's retrograde stops. Getting those probiotics into your body can help you manage stress more seamlessly.

If nothing else, that weird smell in your pee after you eat asparagus is sure to distract you from anything Mercury in retrograde might be ruining in your day.

But on a more serious note, this smelly veggie is supposedly high in something called folate, which is a vitamin that's good at keeping you calm in times of stress.

As if we millennials need another excuse to eat avocados.

These bad boys are also packed with that vitamin folate, and they contain something called glutathione, which helps your body block the absorption of toxic substances that cause more stress in your system, according to Women's Health.

Most of us are well aware of that thing called tryptophan found in turkey that makes us super sleepy during our annual Thanksgiving feasts. But you might not know that that sleep-inducing amino acid can also stimulate serotonin production in your brain, which in turn causes you to feel happier.

Science says the effects of tryptophan on your well-being are real AF, with one study showing that it helps improve your mood and reduce your desire to pick fights with people. So, yeah, even when Mercury's retrograde makes you late for work (again), if you have turkey waiting for you in the fridge for lunch, you'll be feelin' zen again in no time.

6. Any Kind Of Berry

Does anyone else just genuinely enjoy looking at a bowl of berries? The colors in and of themselves are enough to soothe my frazzled mind.

But aside from the pretty aesthetic, all that vitamin C is sure to keep you cool as a cucumber during Mercury retrograde.

Drizzle that sticky good stuff onto a bowl of those berries, into your yogurt container, or combine all three! Honey just so happens to contain tryptophan, and you already know how kickass that amino acid is for your well-being.

When Mercury's time in retrograde gets your blood boiling with travel delays and tension in the workplace, a handful of anything with dark chocolate will lower your blood pressure in no time.

While you're at it, watch the above GIF of someone chopping up chocolate, because honestly, is there anything more calming than that?

With Mercury spinning in retrograde in the middle of December, the universe is basically concocting the perfect scenario for you to come down with a cold. Between the effects of stress on the immune system and the fact that common colds and flus tend to make their rounds in the winter, we're all basically f*cked.

But, we're slightly less screwed if we can get some garlic into our diets during this time. Garlic has been shown to be especially good for strenghtening your immune system when it comes to warding off a cold.

This one probably comes as no surprise, but it deserves a spot on the list nonetheless. According to The Detroit News, the thing that really makes chamomile such a powerfully relaxing bev isn't just its steamy warmth or its soothing scent; it's all thanks to a compound called apigenin, which has been associated "with sleep- and tranquility-enhancing effects."

Mercury, you got nothin' on that apigenin.

More like this
Your Favorite Way To Escape From Reality, As Told By Your Moon Sign
By Roya Backlund
8 Orange Chicken Recipes On TikTok That Rival Your Go-To Panda Express Order
By Rachel Chapman
TikTok's Viral Pesto Eggs Recipe Makes An Eggcellent Avocado Toast Upgrade
By Rachel Chapman
Stay up to date