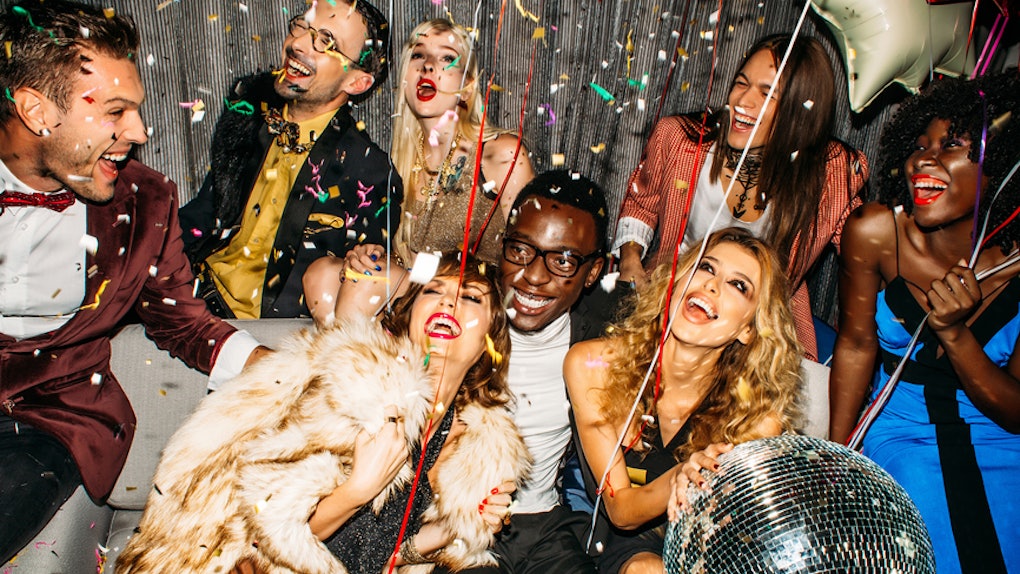 There’s just something so thrilling about that final countdown of the year. The anticipation building as we watch the final seconds of 2017 tick down as the new year arrives with the drop of a ball. Maybe it's corny, but I really do love that moment. It's exciting, like something out of a movie. You can almost feel the new year with all its possibilities unfolding in front of you, as well as the bittersweet emotion of another year slipping away.

But enough about that. Let's makes some jokes about balls dropping, specifically New Year's Eve ball drop jokes you can use as Insta captions for the slightly naughty and low-key cynic in all of us. Most people will be posting messages full of hope for the next revolution around the sun, and that's great. But you know what else is great? Dirty jokes. It might seem like ball jokes would just write themselves, but if you want the real LOLs, likes, and shares, you'll probably need some help — unless you want to still be thinking of one well into 2018. So here's some inspiration for those of you who are feeling less sanguine or sentimental about 2018 and just want to have some fun with it.

If you're gonna bail on a resolution, you might as well make it a fun one, right? Also, best to get it out of the way as soon as possible. Hmm, maybe on second thought, don't come to me for life advice.

OK, now, here is a motto I can get behind. If you started to not give a f*ck about what anyone thinks about you this year, it’s time to make 2018 the year of leaning into that. Pair this caption with a video of the NYE ball dropping, and you're good to go.

Sometimes, you just gotta take those small victories where you can find them.

Hey, I see what you did there. Cheeky!

5. “It figures this year would end with one giant tea-bagging.”

I mean, it has kind of felt like the world was being a bit of a big ol’ d*ck this year, so it makes sense that it would end this way. In fact, it’s almost poetic. OK, that’s a stretch, but you know what? Allow me to refer you back to joke two for my feelings on the subject.

6. “This ball needs to hurry up and drop already. I don’t know about y'all but I need a do-over.”

Hey, if there is one great thing about New Year’s Eve — I mean, aside from all the sequins, booze, and culturally encouraged making out with strangers — it's that it's also a fresh start. And let’s face it: Some of us are thirstier for that clean slate than others.

7. "Cheering crowds watching the ball get dropped is 2017 in a nutshell."

Dark. But let’s keep it real.

8. "If only all balls were this clean and shiny."

A girl can dream, right?

In many ways, this has been a tough year. Yes, it had its bright spots. Wonder Woman, anyone? But for the most part, what 2017 deserves is a big, fat mic drop.

If anything, New Year’s Eve is a celebration of letting it all go… and then resolving the next morning to stop doing all the things you did the night before. And who are we to judge tradition? That's basically what "Auld Lang Syne" means, right? Right.