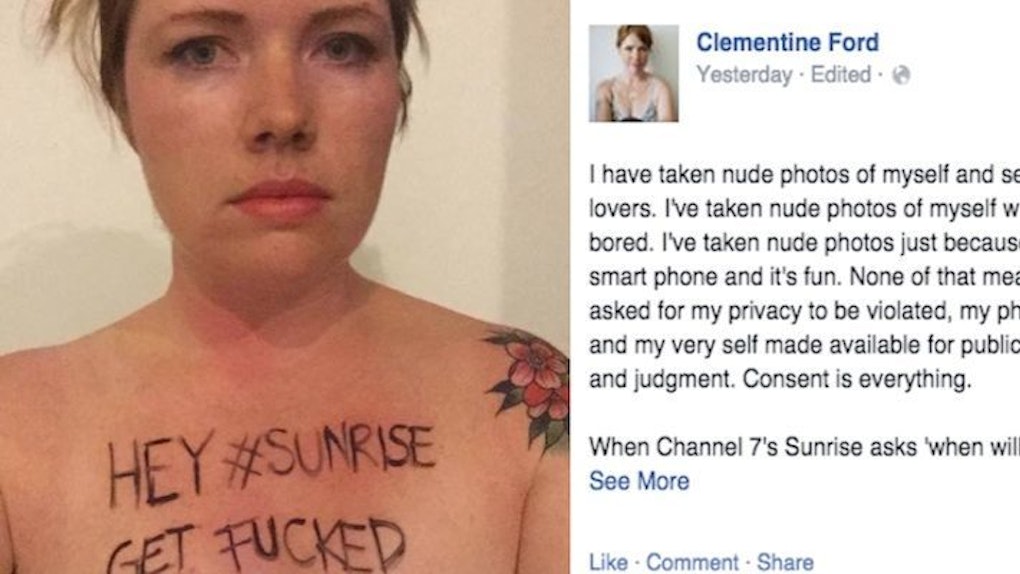 Recently, over 400 Australian women had their nude photos stolen and uploaded to a US website.

What's it going to take for women to get the message about taking and sending nude photos?

Obviously, this post offended many women because, the problem isn't the pictures, it's the violated privacy involved in sharing them.

Also, women don't need a TV show to give them advice on what to do with their bodies.

In response to the ignorant "Sunrise" post, feminist commentator and Fairfax columnist, Clementine Ford, posted a topless photo of herself. To protest the victim blaming, she wrote the message "Hey #Sunrise, get f*cked” across her chest.

In the caption, Ford wrote,

I've taken nude photos of myself when I'm bored. I've taken nude photos just because I have a smart phone and it's fun. None of that means I have asked for my privacy to be violated, my photos stolen and my very self made available for public humiliation and judgment. Consent is everything.

However, after she posted the photo, she was harassed with nude photo requests from strangers, which, truthfully, is just an everyday thing for most women with a cell phone.

She shared some of the gross exchanges with men, who ensured Ford any time she wants to send nudes, they're totally welcomed. Some generous men even included nudes of their own, because women should have to look at the stuff without asking, right?!

In light of audience's discontent and the support received by Ford, Sunrise formally apologized and removed it from its Facebook page.