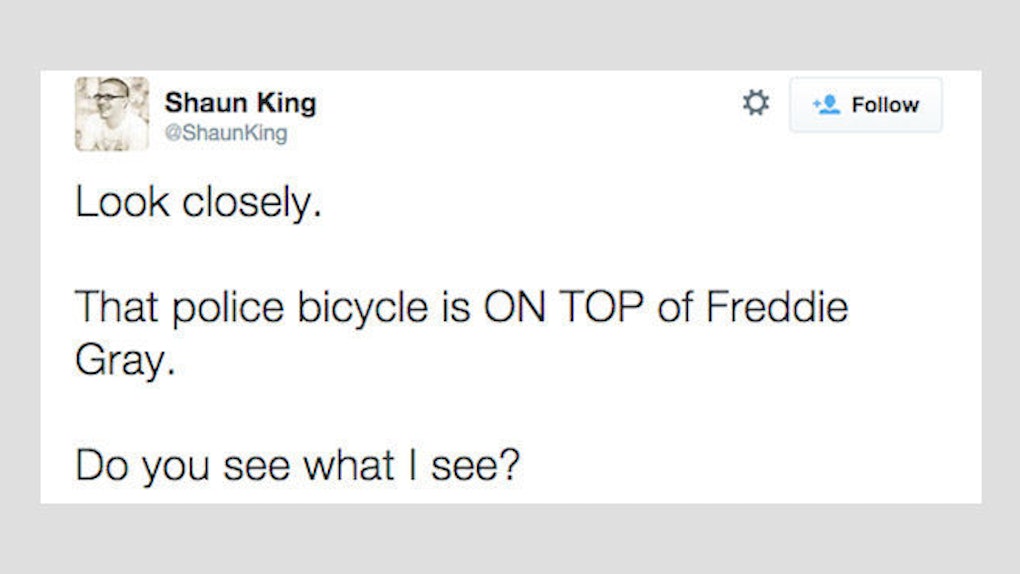 Baltimore has seen a great deal of unrest in the wake of the arrest and subsequent death of 25-year-old Freddie Gray.

On April 12, Freddie Gray was arrested by Baltimore police. The entire incident was captured on video, and it's quite disturbing.

One week later, on April 19, Gray died from a spinal cord injury. But, we still don't know exactly why he was arrested or how he sustained this fatal injury. He may have been injured during the arrest or while in custody.

Freddie Gray was arrested on April 12. It's April 27th and we still have almost no idea how he sustained the injury that killed him. — Christopher Hayes (@chrislhayes) April 27, 2015

Police officers finished their investigation of Gray's death today, but their findings will not be released to the public.

Concurrently, a new report claims Freddie Gray may have deliberately injured himself, but its validity has been fervently challenged.

This one particular tweet may provide insight into what really happened, and if it portrays what it seems to, any claims Gray intentionally harmed himself would be proven decidedly false.

Look closely. That police bicycle is ON TOP of Freddie Gray. Do you see what I see? pic.twitter.com/wA6UOVY53L — Shaun King (@ShaunKing) April 30, 2015

Did police run over Gray with a bicycle, and did it cause the fatal spinal cord injury? We don't have all of the answers, but this is certainly a disturbing image. It's also pretty clear Gray was not able to walk properly as he was being taken to a police van.

One of these 3 officers caused the initial injuries to #FreddieGray. His legs are clearly not working properly. pic.twitter.com/Xy61DiUNdu — Shaun King (@ShaunKing) April 30, 2015

Moreover, doctors apparently claimed Freddie Gray sustained the injuries before he was placed in the van.

I've now spoken to several doctors who've confirmed for me the obvious that #FreddieGray was critically injured before the van ride. — Shaun King (@ShaunKing) April 30, 2015

If all of this turns out to be true, it would mean Baltimore police are undeniably responsible for Freddie Gray's death.