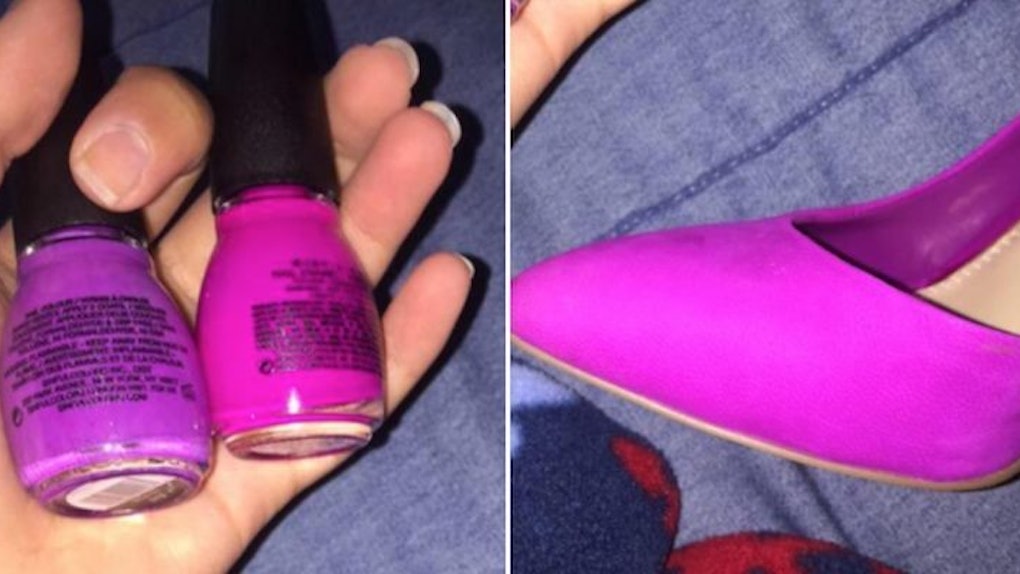 Nobody Can Figure Out Which Color Actually Matches This Shoe

Just when you think you got rid of all the drama associated with #TheDress, #TheShoe comes in and ruins Twitter again.

Twitter user @totallymendes tweeted a photo of a pink (or purple?!) shoe with two bottles of nail polish, asking,

WHICH COLOR MATCHES THE SHOES BEST?

And with one simple tweet, @totallymendes summoned a huge sh*tstorm that includes thousands of tweets about #TheShoe.

Girl, I don't think any of us can.

We haven't even had enough time to recover from #TheDress.

We're still too fragile from the last time to try to make any sense of this.

This is the summer's hottest horror movie.

It's too late for any of us to be saved.

#TheShoe is ruining the youth.

@totallymendes will probably regret this forever.

But it's OK because it looks like we have some solid answers.

so it's neither, thanks for your help microsoft paint program #theshoe pic.twitter.com/CDqQSEPxAP — jb morrissey (@OFFICIALJBPINK6) July 9, 2015

Citations: The Shoe Is The New Dress (Cosmopolitan)