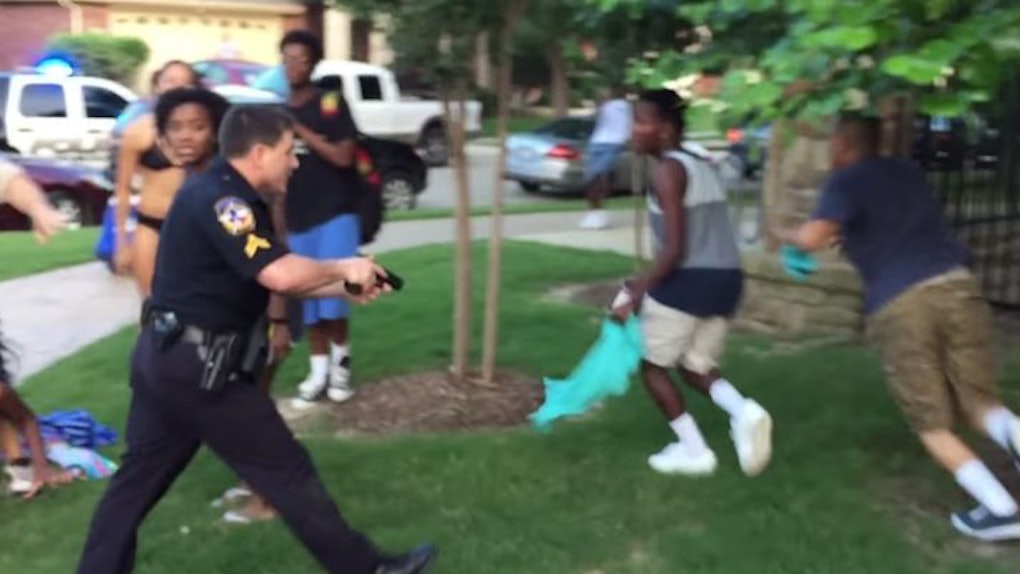 A Texas police officer is on "administrative leave" after he was filmed violently arresting a teenage girl and pulling out his gun as her friends surrounded her.

According to Fox 4, police were called at around 7:15 pm on Friday when a group of youths caused a disturbance during a party at a community pool in McKinney.

The juveniles were reportedly not from McKinney, and they did not have permission to be at the pool.

Brandon Brooks, who first posted the video to YouTube, wrote "a fight between a mom and a girl broke out," and Fox 4 quotes a police source as saying the uninvited youths were brawling.

Casebolt then tells some young men, who were possibly fleeing the scene, to get on the ground and instructs others to leave.

Some girls in swimsuits start to walk away, but it appears one teen, Dajerria Becton, shouts something to Casebolt that agitates him.

Casebolt walks up to Becton, grabs her by the arm and wrestles her to the ground to apply handcuffs.

The officer immediately draws his weapon when Becton's friends rush to her aid.

He continues to hold the teen down until two more officers emerge with an adult male in handcuffs.

Becton was not charged, and she was eventually released to her parents, Mashable reports.

McKinney Police Chief Greg Conley told reporters on Sunday the incident is being investigated, and Casebolt has been placed on administrative leave.

McKinney Mayor Brian Loughmiller released a statement that day saying he was "disturbed and concerned" by the video, and the city's police are expected to act "professionally and with appropriate restraint to the situation they are faced with."

The adult male, who had allegedly fled the scene, was the only arrest made.