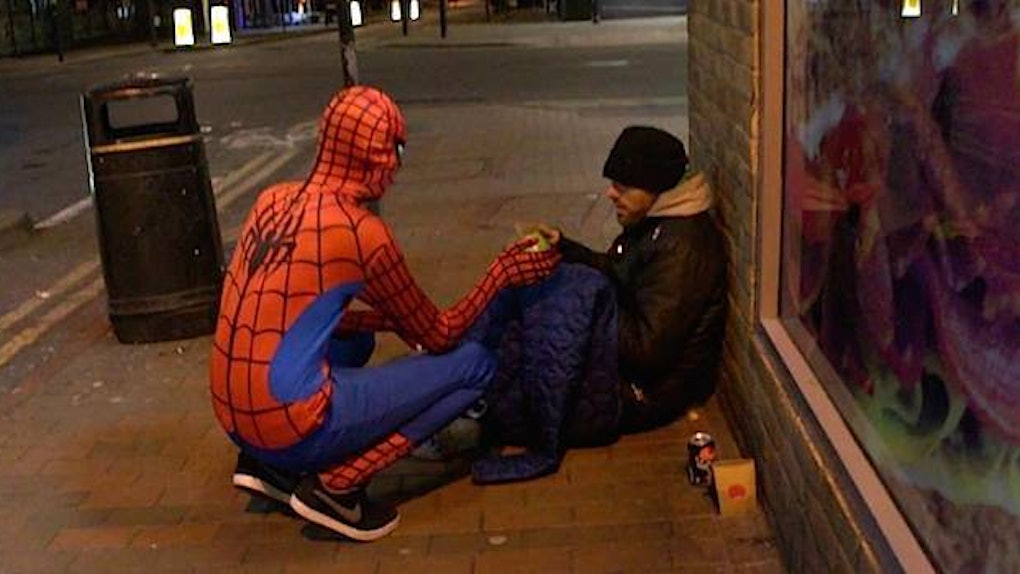 Mysterious Spider-Man Is Going Around His City Feeding The Homeless

New Yorker no more: Spider-Man has packed up and moved across the pond to help out those in need in Birmingham, England.

Okay, so it's not really Spider-Man -- but there is a man in the UK town who dresses up as Spider-Man a few nights a week to hand out food to the hungry and the homeless.

The anonymous 20-year-old has long been involved in charitable and volunteer work but has only just begun to gain attention because of his eye-catching duds.

Before when I was handing out food, no one would take a second look. But when they see Spider-Man handing out the food... they are really interested. Most importantly, [they] become inspired to get involved themselves.

He's been making his rounds throughout Birmingham for about a month and has since become something of a celebrity. Still, he promises his intentions are entirely pure.

I believe that we need to look at everyone as humans and help each other the same as we would a close friend.

Our Spidey senses say Birmingham is about to become a much better place, thanks to the selfless work of this anonymous hero.

Check out some photos below.

A good evening handing out food to people who needed it, bit earlier than usual to avoid the rain #BrumSpiderman pic.twitter.com/cfFmcPp5z9 — Birmingham Spiderman (@BrumSpiderman) March 8, 2015

Sometimes he donates clothing, as well.

He uses his Spidey senses to find the people who need help most.

He hopes to encourage others to #FeedTheHomeless.

So far, he's been pretty successful.

Like the real Spider-Man, nobody knows his real identity.

He always wears his Spidey suit.

And he's a true superhero.

Citations: Anonymous Spider Man Feeds Homeless At Night Proves Anyone Can Be A Superhero For Change (Huffington Post)