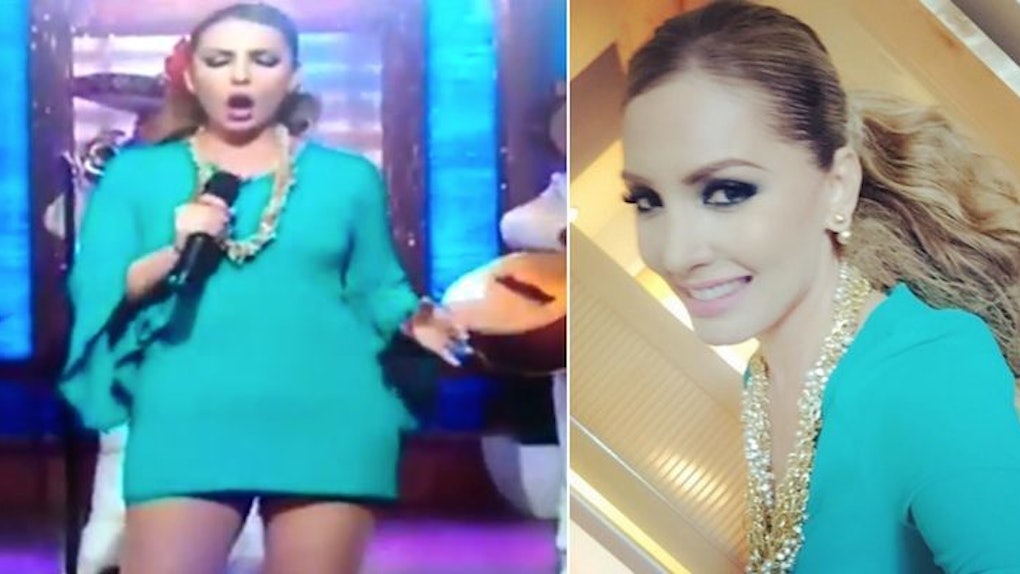 Every woman has at least one mortifying period-related story in her arsenal, but I doubt if they compare to Patricia Navidad's.

The Mexican singer was performing on the live morning talk show "Despierta América" this week when her sanitary pad slipped out of her underwear and fell to the ground between her legs.

It should be noted she was wearing a dress.

Fortunately, she handled the situation like a pro and continued her performance without missing a beat.

Since the unfortunate mishap, the 42-year-old has been continuously victimized by news outlets and viewers alike, all of whom thrive off the mortification of one unlucky woman.

But, Navidad took to Twitter to address the controversy; you can see her tweets below.

She tweeted, “They say that a man who treats a woman like a princess was raised by a queen, those who attack, who raised you?”

Navidad said what happened is "nothing to be ashamed of."

“Too bad all the men that are making fun of this weren't there, because if it is what they say it was I would've loved to have smeared it on their face.”

She continued, "I don't need wings to fly, I have imagination and thanks to God I have a sense of humor."

"I'm not a boxer, I'm a warrior, and I never throw in the towel unless I don't need it anymore."

My thoughts are this: The fact this is even in the news serves no beneficial purpose. Worse, the sensationalization of the incident only reinforces cultural taboos about menstruation, a reality so many women are working hard to fight.

I'm proud of how well Navidad handled herself, and her composure is admirable.

But next time something like this happens -- well, let's just hope there are more important matters at hand for the world to focus on.

Citations: Embarassing moment Mexican singers hygeine pad falls from between her legs during live TV performance (Daily Mail ), After a Singers Pad Fell Out On Live TV She Shut Down The Haters In The Best Way (BuzzFeed)