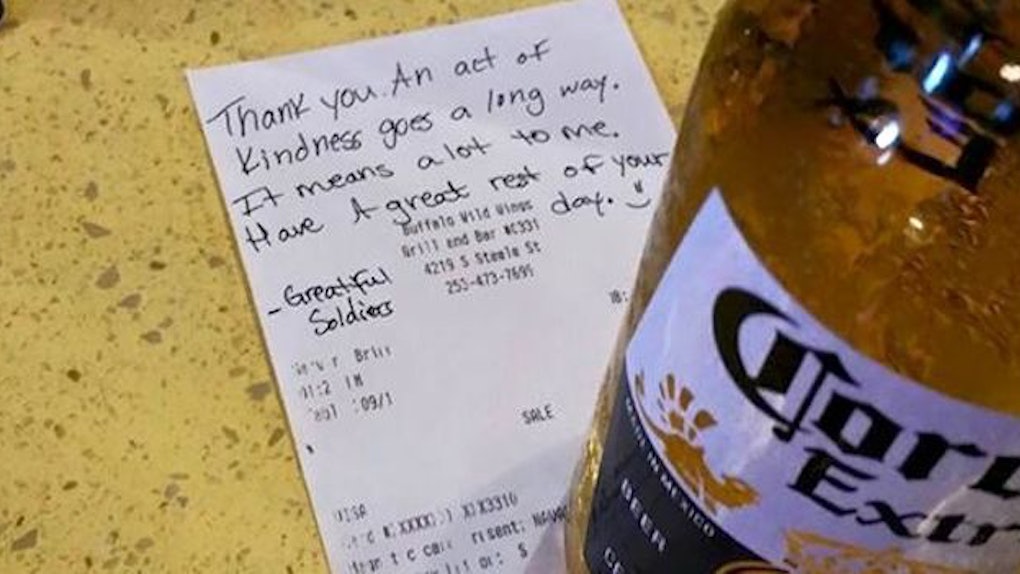 A restaurant server got some major Internet love after he made a small gesture of thanks to a military woman and her late brother, a fallen soldier.

Brian Avey, a server at Buffalo Wild Wings in Tacoma, Washington, was taking the order of a woman in the military when she asked him for a Blue Moon and a Corona.

As is policy, Avey told the woman he could only serve her one beer at a time.

Her response was heartbreaking.

She said the Corona was for her brother who died in Iraq and I won't be drinking it.

So the server got her both drinks, and when he brought her the bill later on, he told her the restaurant would be covering the cost of the beer.

On her receipt, the woman wrote,

Thank you. An act of kindness goes a long way. It means a lot to me. Have A great rest of your day. -Greatful Soldiers

Avey posted the exchange to Facebook, and the picture went viral, garnering more than 40,000 shares and 93,000 likes.

A Military Woman came into my work today for Lunch, she ordered a Blue Moon and a Corona, I told her she could only do... Posted by Brian Avey on Thursday, July 9, 2015

According to the post, Avey asked his boss if he can leave the beer on top of a cooler next to an American flag.

To his surprise, his boss responded,

That's fine, just do me a favor, put a fresh lime in it every morning.

Citations: Restaurant Raises a Drink to a Fallen US Soldier Killed in Iraq (Mashable)