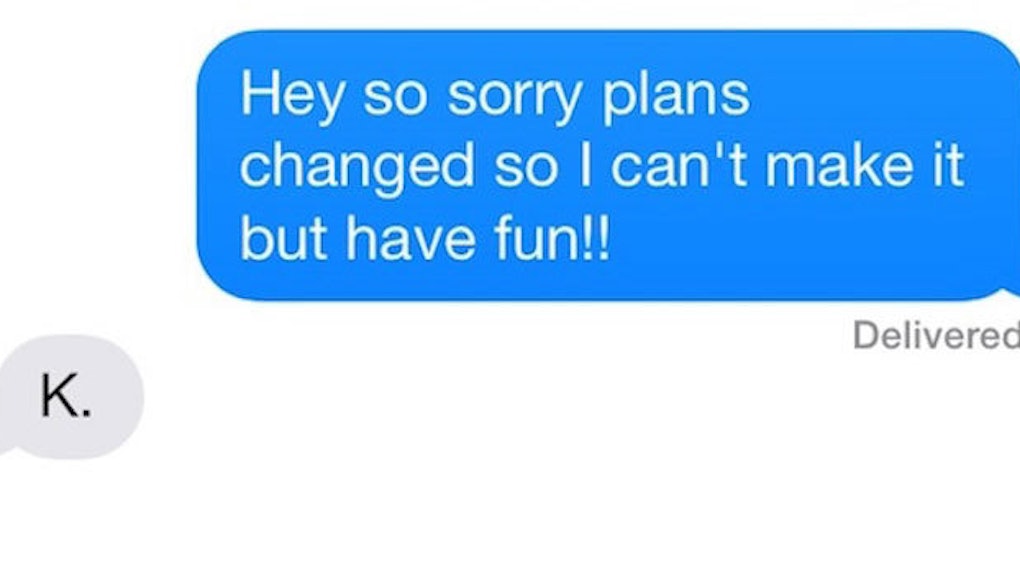 I'm pretty sure the rudest text message I've ever sent someone was "K." That's right: the letter "k." With a period after it.

If you've been living under a rock since Steve Jobs gave the world the first iPhone, you may not realize just how nasty I sound sending a text like that.

If you haven't been living under a rock, then you probably just shuddered at the thought of receiving that text.

That's because I not only used perhaps the most shady letter known to text messaging, but I tactfully placed a period after it to emphasize just how pissed off I am.

If you think I'm a terrible human being for inflicting a painful blow like that to someone via text message, you're not alone.

Apparently, studies have been done on the language we use in our texts, and the period is by far the rudest punctuation mark you could use in the mobile messaging age.

Researchers at American University found college students only tend to use certain punctuation when highlighting or emphasizing ideas, opinions and inflections of tone.

Mark Liberman, a linguistics professor at the University of Pennsylvania, tells New Republic,

In the world of texting and IMing… the default is to end just by stopping, with no punctuation mark at all. In that situation, choosing to add a period also adds meaning because the reader(s) need to figure out why you did it. And what they infer, plausibly enough, is something like 'This is final, this is the end of the discussion or at least the end of what I have to contribute to it.'

Right on, Liberman. You took the words right out of my mouth. So, if any of you get a text from me with a period at the end, you should know that I no longer have any interest in talking to you.

Note the difference between these two examples:

Seems exciting, right? Perhaps the two of you are going for a night out on the town. Who knows what you'll get into, but that exclamation point sure is foreshadowing a wild night!

Now compare it to this:

Notice the obvious change in tone your mind took on while reading that. I feel like this is just as bad as the "We need to talk." text. I really do not want to be anywhere near this person at 10 pm.

So, maybe my boyfriend thinks I've been reading into his texts too much, but now there's actual science to back my philosophy behind the period.

Personally, I feel like it's just something we should leave out entirely from the English language.