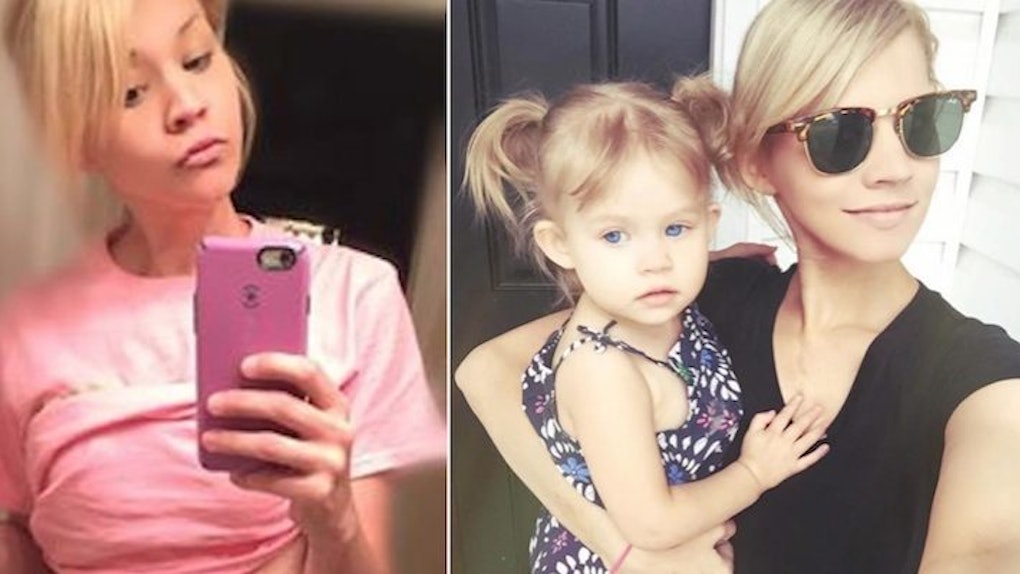 South Carolinian mother Kimberly Henderson is making headlines after posting a body-positive photo of her beautiful belly to Facebook.

The photo, shared nearly 11,000 times in a matter of days, features the musician and mother-of-four exposing her flat but well-worn stomach.

After giving birth to her children, Henderson lost her six pack and gained the tell-tale signs of motherhood: loose abdominal skin and stretch marks. As a result, she felt incredibly self-conscious.

Everyone always compliments me on how I have such a "perfect" body after 4 kids. I decided to upload this pic and leave... Posted by Kimberly Henderson on Thursday, June 18, 2015

But now, the mother says she loves her belly, and she thinks all mothers should celebrate their powerful child-bearing bodies, no matter what they look like.

Everyone always compliments me on how I have such a 'perfect' body after 4 kids. I decided to upload this pic and leave my belly 'unedited' 'unphotoshopped' because I used to struggle with accepting my body after kids. I used to have a six pack before my babies…And now even though I work out I know its not going to make my loose skin tight…Or my stretch marks disappear ever lol and I'm ok with that because everyday I get to wake up to 4 beautiful smiling faces and I'm reminded that they are worth this flabby belly and they are worth these stretch marks. I still wear a bikini because being a mother makes me feel beautiful….Not having a flat tummy. It took a long time to get there…Because I struggled so much with my body. I struggled so much because I was young and all these girls my age had perfect bodies and I was in my one piece bathing suit trying to hide all my flaws. And I'm not trying to say I have it worse than anyone else or bad or anything like that just reminding you guys…That your body is beautiful…BECAUSE we ARE moms and we ARE superheroes and we freakin ROCK and in my opinion that is sexier than any 6 pack!

Henderson, who was rejected from "American Idol" three times, also made headlines last year when a video surfaced of her singing “How Will I Know” to her daughter in the middle of the night.

Along with spreading a body-positive message, Henderson hopes her recent publicity will allow her to connect with her own mother, who left her when she was just 11 years old.

Citations: A Mum Posted This Picture Of Her Belly Because She Was Tired Of Hearing She Had A Perfect Body (BuzzFeed)